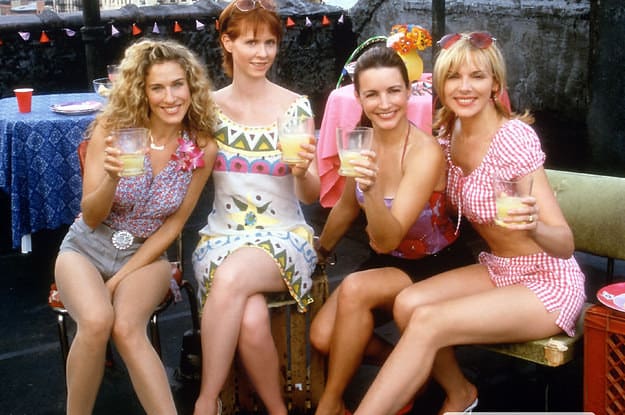 The sitcom “Friends” aired from 1994 through 2004 and is all about New York City. The 6 young adult friends go through the typical angst of being in your 20’s but they got to do so in New York City where living on your own, finding jobs and finding love can be exhilarating and frightening. From the coffee house where they gather “Central Perk” to Monica and Rachel’s rent controlled apartment in Greenwich Village to the studios of “Days of Our Lives” to the offices at Bloomingdales, “Friends” gives us a look at the New York City young adults know and love.

When Kimmy Schmidt of the Netflix comedy “Unbreakable Kimmy Schmidt” is released from captivity underground in rural Indiana, she arrives in New York City to appear on the “Today” show and falls in love with the city. Her initial reaction to Broadway and Times Square is awe inspiring and gives her hope and a fresh start where she doesn’t want anyone to know about her past as a “mole woman”. Of course, she encounters darker sides of being alone in the big city like unemployment and homelessness, but Kimmy Schmidt perseveres and make friends with a menagerie of New Yorkers including her eccentric landlord, trophy wife employer and aspiring star Titus. For Kimmy, New York City is about hope and opportunity and the show portrays that in every crazy scene.

Tina Fey’s NBC comedy “30 Rock”from the 2000’s is a satire on a “Saturday Night Live” makes you feel like the viewer is actually a part of the gritty late night reality sketch show. Tina Fey as Liz Lemon not only portrays a writer on the show but also a single woman living in the big city. As “Saturday Night Live” demonstrates the real New York, “30 Rock” took us behind the scenes.

Carrie Bradshaw was a young aspiring writer living in the big city in HBO’s “Sex and the City”. During the show’s run, Carrie reveals her love affair with New York and her attachment is endearing. As Carrie and her 3 friends navigate careers and love lives as single women, we see the importance of Manhattan in the ladies’ lives. Whether dining at the latest restaurants, clubbing at the hottest clubs or shopping at the best brand name stores, “Sex and the City” makes us fall in love with New York just as Carrie does.

During the 1970’s “Barney Miller” followed the cops working at a precinct in Greenwich Village before Greenwich Village was home to the characters of “Friends”. Most of the action takes place within the precinct office as the characters of the NBC sitcom bring in hapless criminals for investigations and banter among themselves. The classic comedy showed the grittiness of New York City and gave heart to the men who protect us.

The police and legal drama franchise “Law and Order” has aired on NBC for 2 decades. Although there have been many police and legal dramas set in New York City, “Law and Order” shows us a complete look at the city. The first half of each show is the investigation of a crime in the city while the second half of the show shows us the legal side of the cases. “Law and Order’s” detectives certainly have a real relationship with the city and that is demonstrated in every episode.

The late 1970’ssitcom “Taxi” took us into the world of New York taxi drivers. Much of the action took place within the Manhattan fleet garage of the fictional Sunshine Cab Company. Gritty dispatcher Louie De Palma (Danny DeVito) sends his crew out on calls. The crew consists of Alex Reiger (Judd Hirsch), Elaine Nardo (Marilu Henner), Tony Banta (Tony Danza), Bobby Wheeler (Jeff Conway), Iggy (Christopher Lloyd) and Latka (Andy Kauffman) among others as the ensemble brought us comedy and heart each week. With “Taxi” we got to know a different side of New York City.

AMC’s “Mad Men” took us back in time the New York City of 1960’s. Don Draper (Jon Hamm) is a major part of Sterling, Cooper, Draper and Price, a Madison Avenue advertising firm. With its characters’ work and home lives, we feel like we are living in 1960’s New York. With “Mad Men” we got to see not only the inner workings and creativity of advertising in the 1960’s but real life events like the Civil Rights movement and the assassination of President John F. Kennedy and the affects on the characters of the show. “Mad Men” brought us into the real world of 1960’s Manhattan and its suburbs.

Fox’s “Empire” premiered in 2015 and shows us a unique side of New York City. The show follows a fictional hip hop music and entertainment company. We see the drama that unfolds as the founder’s family tries to retain hold of “Empire Entertainment”. Hip Hop mogul Lucious Lyon (Terrence Howard) struggles to maintain his empire for his family amid disease, murder and imprisonment. Although filmed in Chicago, “Empire” is a true New York City drama that takes us into a world we may not have known before.

“Girls debuted on HBO in 2012 and is produced by Judd Apatow. New York City is the scene of many young adult television shows, and “Girls” is a comedy-drama following 4 young adult girls living in the “big apple”. Star Lena Dunham draws much of the stories plot from her own life. She was cut off financially by her parents when she decided to become a writer and makes some unfortunate decisions. The show takes a good look at the lives, decisions and interactions of the 4 young women as they struggle to achieve their dreams while navigating New York City.

This comedy-drama FX series has won critical acclaim. “Louis” follows comedian Louie C.K. in a fictionalized version of himself as the divorced father of 2 daughters living in New York City. The loose format of the show gives us a unique look at the city. The show which is based on the comedian’s satirical comedy takes place in the perfecting setting, New York City, for its black comedy and mixture of drama.

“How I Met Your Mother” is another young adults living in New York City sitcom which aired on CBS from 2005 to 2014. What stands out in “How I Met Your Mother” is the plot. Ted Mosby (Josh Radnor) narrates the story to his children about how he met their mother. We don’t know who the mother is until the end of the show’s run. While narrating his past, Ted and his friends explore careers, love and interaction while living in Manhattan during as 20 somethings. The characters are endearing and at times quirky but always loyal to each other as friends. “How I Met Your Mother” takes us into the world young adults living in New York City.

“Gossip Girl” aired on the CW network from 2007 to 2012. Unlike the typical comedy or dramas set in New York City about growing up, “Gossip Girl” followed the lives and interactions ofupper-class adolescents living in Manhattan’s Upper East Side. While the drama follows those kids’ lives, it also features New York City prominently. Filmed in the city, we get to see several New York City landmarks including the New York Palace Hotel, the Campbell Apartments, the Museum of the City of New York, Columbia University, the Russian Tea Room and much more.

New York City is the main character in the comedy series “Broad Street”. Developed from a web series by Ilana Glazer and Abbi Jacobson, the hysterical TV show is loosely based on the friends lives living in New York City. The show is both funny and odd. We get to see these 2 young ladies creating scenes on the streets of New York City.

The original “Will and Grace” was a staple of NBC’s “Must See TV” from 2001 through 2005, and fans of the show are excited to enjoy the shows return a decade later. The show follows Will, an attorney, and his best friend and roommate Grace, an interior designer. Grace was always attracted to her best friend Will despite the fact that he’s homosexual. The 2 maintain their friendship over decades. The TV comedy would not be complete without Grace’s assistant, Karen, and Will’s friend Jack. The ensemble cast is terrific and their relationships demonstrate a great understanding of New York City.

“Daredevil” is Marvel Comics television adaptation of the blind lawyer by day, crime fighter by night. The Netflix TV show shows the superhero fighting crime on the streets of New York City’s “Hell’s Kitchen”. Shooting of the show takes place on the streets of Brooklyn and are made to bring back the era of the beautiful yet gritty “Hell’s Kitchen” neighborhood of the 1970’s. The show’s creators take special care to bring that era of New York City to life.

The ABC TV series “Castle” aired on ABC from 2009 to 2016. The New York City set series is a comedy and crime drama. The show follows best selling mystery novelist Richard Castle (Nathan Fillion) and homicide detective Kate Beckett (Stana Katic) as they solve crimes in New York City while reluctant to work together. As with other crime dramas set in Manhattan, the city plays a big role in this series.

The 1980’s TV series “Fame” was based on the movie of the same name. The show demonstrates an important side of New York City, the side where young talented kids follow their dreams of becoming famous. The fictional New York City High School for Performing Arts is a place similar to where many actual stars honed their performing talents. The show and film were critically acclaimed and brought us into the lives of characters who embodied the idealism of rising to stardom in the great city of New York.

CBS’ police drama “Blue Bloods” follows the Reagan family with strong ties to the New York Police Department. Much of the TV showis filmed on location on the streets of New York City. Now in its eight season, the show remains a hit. Tom Selleck is the New York Police Commissioner and the patriarch of the Reagan family which includes Donnie Wahlberg, Bridget Moynahan, Will Estes, Len Cariou and Amy Carlson. Not only does the show demonstrate the strength and morality of the NYPD, but the show pays homage to the entire city.