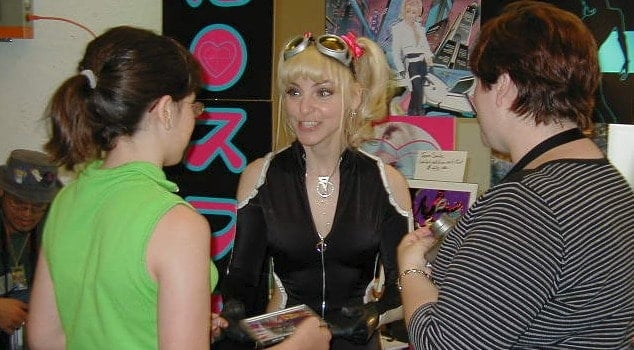 If you’re not certain who Apollo Smile is don’t worry too much over it. She was more of a 90’s oddity and in case you’re wondering there were plenty of those back in the day. She was classified as a singer, songwriter, and actress, but she was best known for her role as the “Live-Action Anime Girl”. This was a self-created title as she did in fact appear in a lot of anime, video game, and comic conventions where she showed up and signed autographs. Unfortunately a lot of anime fans didn’t think much of her and even went so far as calling her a fake. She released a few albums, only one that got any kind of attention, and at this point they’re almost impossible to find anywhere. She could be classified as a pop star on top of her other credits, but while she doesn’t have the greatest singing voice she at least gave it a shot.

Her real name is Paul Scharf.

It’s not exactly the kind of name you would think of when thinking of someone famous but then again there are a lot of names out there that don’t seem destined for fame or glory despite the fact that many of them are attached to people that have gone on to do great things. The reason for her name comes from the fact that one of her instructors misheard her name when she was younger and simply assumed that instead of hearing “Paula” that she had said “Apollo”. Obviously this caused a bit of confusion with Apollo being seen as a more masculine name, but it still stuck. Her surname came from the magnificent smile that she wore so continuously as you can see above. Eventually Paula did change her name legally and started going by the moniker that almost made her famous.

She was born with a slight deformity.

Apollo was born with a twisted hip tendon that restricted her physical movement at first. Her mother quickly enrolled her in any physical activity she could at the age of 3. Through dancing and other activities this birth defect was eventually corrected and she became quite talented. By the time she reached maturity she was a skilled dancer and gymnast, therefore gaining a skill set that was highly prized at the time. Unfortunately a great many other individuals had gained this same skill set and while Apollo had a charming smile and winning attitude she was still fighting an uphill battle that many people have experienced at some point in their lives when trying to make it big.

Apollo did have a career.

This isn’t to say that she didn’t manage to do anything with what she had. Apollo did have skill set that was prized and valued to many, but her role in the 90’s, besides being the live-action anime girl that she created, was confined mostly to voice roles and as a stunt woman for a handful of shows. For the most part she was still an unknown save to those anime fans that truly had their finger on the pulse of the genre and could identify her without much trouble.

Apollo is kind of great example of what happened to a lot of stars in the 90’s that just didn’t have enough of a push to get into the mainstream and stay there. She did a good deal of her own promotions and as a result never got too far. For many people that want the fame and notoriety, and likely the fortune that goes with it, this has become rather frustrating as they have the drive and ability but not quite enough to push them over the edge into true fame. Many people came and went in the 90’s and have continued to do so since hundreds of people that are highly skilled and can actually act have come to Hollywood or similar venues to make their name known. The only problem is that out of the hundreds, the thousands, there are only a handful that will make it past the initial screening process, and then out of those only a smaller handful that will make it to the auditions. From that number only a few ever seem to make it big. Apollo did everything she could to become one of those few and for a brief moment she was there, she had the chance, and then the 90’s were over and her name was lost in the shuffle again.

Don’t feel too bad though, she hasn’t disappeared entirely as after working in the performing arts for 25 years she took up a job teaching dance and choreographing high school musicals back in her hometown of Guilford, Connecticut. She currently teaches jazz, lyrical, and hip-hop for Dance by Leslie, so it’s easy to assume that she’s still doing something that means a great deal to her.