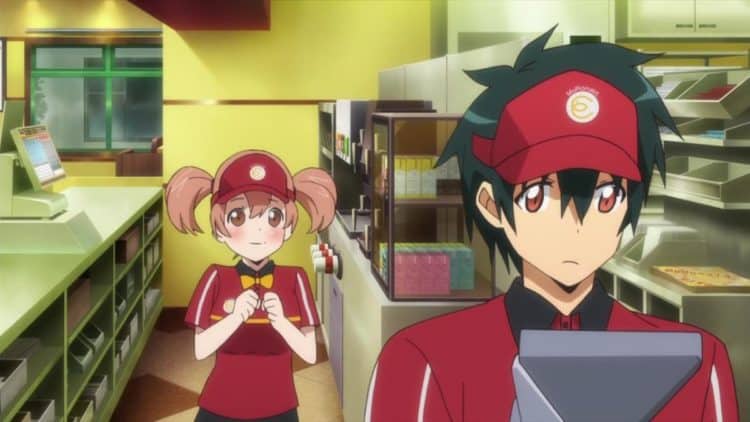 The Devil Is a Part-Timer is a series that started up in 2011. As a result, it predates the isekai boom that has overtaken anime and anime-adjacent media in recent times. However, a case can be made that The Devil Is a Part-Timer is a reverse-isekai. After all, it is focused on a number of characters from a fantasy-themed world that have been transported to the real world rather than the reverse. For those who are curious, the titular character was the Demon Lord of his homeworld. He was very successful until he encountered the hero Emilia and her companions, who press him so hard that he and his subordinate Alciel flee to a different world through a magical portal.

Unfortunately for them, they land in modern Tokyo, with the result that the Demon Lord becomes a fast restaurant worker named Maou Sadao while Alciel becomes his houseman named Ashiya Shiro because there is next-to-no magic. Eventually, the Demon Lord runs into a call center worker named Yusa Emi, who turns out to be the hero Emilia who has pursued him to modern Tokyo. This results in enormous tension between the two until it becomes clear that he isn’t a huge threat to everyone and everything around him. Moreover, it turns out that this isn’t a change of heart on the Demon Lord’s part. Instead, he has always been this way, which raises the question of exactly what happened in their mutual homeworld. Regardless, Emilia is the first character from the other side that he runs into besides Alciel and himself. However, she is far from being the last.

On the whole, The Devil Is a Part-Timer seems to have been a commercial success. There is one light novel series. However, said series ran for the better part of a decade, releasing a total of 27 volumes starting in February of 2011 and finishing in August of 2020. There are even longer-running light novel series that can be found out there. However, that is a very impressive figure in its own right. Meanwhile, it should come as no surprise to learn that The Devil Is a Part-Timer has a manga adaptation, which started up in February of 2012 and has continued running to the present time. Something that has seen 16 volumes released so far. On top of this, there have been not one but two spinoff manga. One managed a total of five volumes. The other started up in August of 2019 and has also continued running to the present time.

Why Is There a Season 2 of The Devil Is a Part-Timer?

As such, this might explain why it has been announced that the anime will be receiving a second season. For context, this is very strange. After all, the first season of the anime came out in 2013, meaning that there had been a gap of eight years in between these two occurrences. Such things aren’t exactly unknown when it comes to animated adaptations. However, they are definitely unusual. In any case, the announcement suggests that The Devil Is a Part-Timer is a series that has managed to retain a fair amount of its popularity in spite of the passage of time. Generally speaking, such series lose more and more of their popularity over time.

As a result, while the initial series might continue on for quite some time, the other works tend to be front-loaded because that is when they can get launched by riding on mounting momentum. Given this, the launch of a new spinoff manga in August of 2019 was very curious because it suggested that there were people willing to read it, which in turn, suggested that there were still people who cared about The Devil Is a Part-Timer. Naturally, this is but one of the numerous factors that presumably factored into the relevant parties’ decision-making, meaning that we do not know exactly what it meant behind-the-scenes. However, it nonetheless seems important from this side of things.

Even so, it is clear that the announcement of a second season was by no means guaranteed. This is because as recently as June of 2017, the author of the light novel series Wagahara Satoshi stated that such decisions weren’t made by the original creators of the series because they were still business decisions in the end. As a result, while he couldn’t guarantee that another season of the anime would be made, fans should continue pushing because that was how they could get what they wanted from their side of things. Still, the fact that questions about a hypothetical second season came up enough for Wagahara to comment in public suggests that there was a fair amount of interest in a continuation in 2017.

What Do We Know about Season 2 of The Devil Is a Part-Timer?

Unfortunately, while we know that Season 2 of The Devil Is a Part-Timer is being made, we don’t know much else about it. One thing that has been confirmed is that the Japanese cast will make a return, which makes sense because the Japanese market can be very sensitive about such things. However, the same has not been confirmed for the English side of things, though some of the original English cast members have expressed an interest in making a return. Besides this, there are some things that can be guessed though. In particular, the first season of the anime covered just two volumes out of the series. As a result, it seems reasonable to say that the second season will be picking up where it concluded by moving on to the subsequent volumes. What isn’t clear is the number of volumes that will be covered by this season. If it goes at the same pace as its predecessor, it will presumably cover another two volumes. However, anime seasons have been known to go much faster than that. Regardless, it will be interesting to see whether Season 2 of The Devil Is a Part-Timer will be successful enough to ensure further seasons, particularly since an ending for the series as a whole has already been penned.