Home
Movies
What Might Be in Store for a Sicario 3? 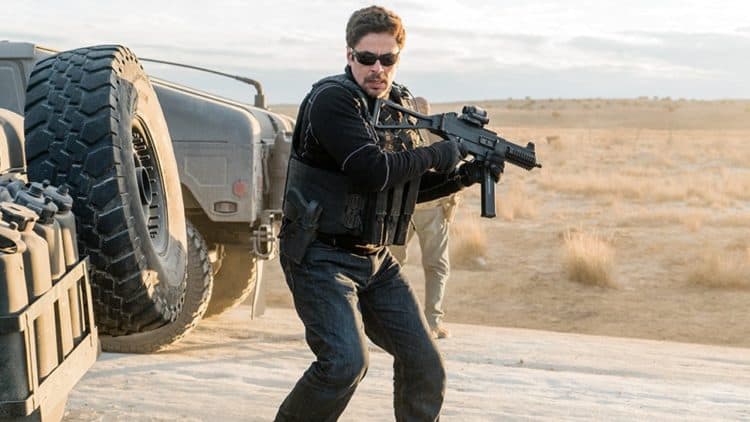 So far there’s been no green light for a Sicario 3 but there is interest in another movie, possibly with the return of Emily Blunt. Fans and critics alike are kind of hesitant to think of this since it would indicate that the entire Sicario series so far would be one giant franchise that is meant to run into each other one after the other. So far with Sicario and Soldado the missions have been fairly separate without any real overlap besides the men that have been sent to do their job. Gillick and Graves are the two operatives that people have been the most focused on throughout the first two movies, and it would seem that in Soldado they almost came to stand opposed to one another since the order to kill the girl they’d kidnapped and Gillick was meant to tie up loose ends that couldn’t be left to implicate the US government in any wrongdoing.

Making another film would be great it seems but it would also need to follow the same kind of theme as the first two since there are elements that link them together, but there are also many elements that allow each movie to stand on its own. The third movie seems like it would be best served if it became more personal than business this time around, since Graves and Gillick now find themselves on opposite sides as per the second movie. It’d be hard to think that Gillick would work well with Graves after being targeted by the same people he’d been helping for so long, though it would be easy to think that Gillick would give Graves and his men a fairly good run in the third film if this confrontation was allowed to happen.

Bringing Emily Blunt back into the mix would have to be done with care and precision it feels like since by the end of the first movie it felt as though her part had been played out and done, and that she wanted nothing more to do with any of it. But the argument could be made that Gillick might find in her something that might help him reach those that had sought his death, or perhaps Graves would use her in some way to discredit Gillick even further. In any event her inclusion, if it did happen, would need to be handled with care or omitted altogether. The only two characters that seem as though they need to be allowed into this movie without any filter or overt rules to them would be Gillick and Graves.

In a metaphorical sense this would be a knockdown, drag-out slugfest since both men are highly trained, very skilled, and are free-thinking individuals that know how to get increasingly aggressive when the moment calls for it. Each of them has shown in the past movies that they’re not above taking out those that the government tells them to, though Gillick at least has shown a bit of a conscience since he couldn’t allow Isabel to be killed or sold. You could argue then that Graves has a heart too since he didn’t execute Isabel either. Had such a thing happened it would be easier to hate either man for this and then allow their ruination to find them without remorse on the part of the audience, but considering that they each showed compassion it seems more likely that a third film still wouldn’t end with the death of either man unless there was no other choice.

This kind of story could go on for a couple more films if the creator was truly interested since it’s comparison to Mission:Impossible and how each of those movies has been a standalone has people talking now about the possibilities of Sicario being the same kind of movie for the crime genre. It does raise a lot of interesting possibilities that might be brought to the writer’s table and therefore discussed in a manner that might give the next Sicario movie a very different but familiar look. If you really think about it, Gillick and Graves could possibly come to a mutual understanding and Gillick could start working for, or with, Graves directly without the approval of the United States, sort of a paid enforcer that no one knows about. It’s true that this is already the role he took on, but in the first two movies he was being sanctioned by the US government. This time around he wouldn’t be, but he’d still be working for Graves when he needed him.

The likelihood of such a story is probably nil, but it’s something fun to think about all the same since the ideas seem to be flying for the next Sicario movie, and it’s possible that we could see one within the next few years if someone’s feeling ambitious.