Home
Television
Why You Should Be Watching Amazon’s “Goliath” 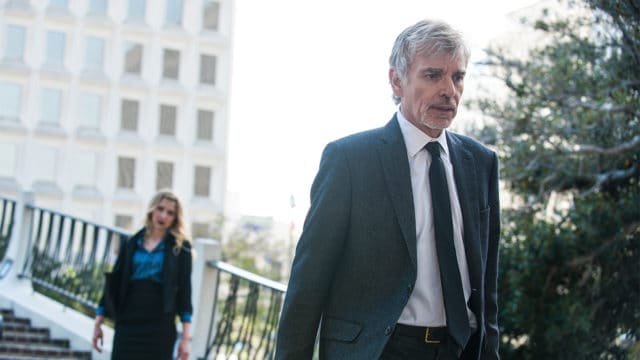 Goliath was the name of the huge Philistine champion who was felled by the shepherd David with a sling-stone to the head. As a result, it should come as no surprise to learn that there is both a David stand-in and a Goliath stand-in in Goliath, which is an Amazon Studios legal drama that will be seeing a second season sometime in the future.

The David stand-in is Billy McBride, a once-successful lawyer who co-founded Cooperman McBride but has since fallen far because of an unfortunate case, while the Goliath stand-in is the other co-founder of Cooperman McBride, Donald Cooperman, who lurks in his office as though a spider at the center of a web of influence that extends far beyond his immediate surroundings. The two enter each other’s orbit when McBride takes on a personal injury case centered around a man who was said to have committed suicide by blowing up a company-owned boat, while Cooperman McBride takes up the case for the sake of said company. Suffice to say that people who expect a clash from such circumstances will not be disappointed, though that is far from being the sole reason to watch Goliath.

Why Should You Watch Goliath?

After all, Goliath was created by David E. Kelley. For those who are unfamiliar with that name, he is one of the most successful TV writers that can be found in Hollywood, as shown by the fact that he has created TV shows that have aired on all four of the top commercial TV networks in the United States. Furthermore, it should be mentioned that he has created six other legal dramas so far, including some famous names such as Ally McBeal, The Practice, and Boston Legal. As a result, there can be no doubt about the fact that Goliath has plenty of expertise and experience with its kind of TV show backing it up behind the scenes, which should come as welcome news to those who are interested by the concept but unsure whether to take the plunge or not.

Of course, execution is much more important than the basic concept when it comes to the results. In this regard, Goliath is interesting because it can feel like two TV shows bound together at times, which is actually useful in that the distinction serves to further differentiate its David and its Goliath. McBride is the sort of anti-hero who has become more and more popular in recent times. Someone who takes on one of the best law firms in the business for the sake of getting even, who uses all of the legal tricks that he has learned over the course of his career for a good cause but sometimes goes too far with his manipulation. As a result, it should come as no surprise to learn that his supporting cast can be rather unconventional, as shown by the prostitute who also doubles as his legal assistant. In contrast, Cooperman is ensconced in a much more conventional setting for legal dramas in the form of a top-tier law firm, though his supporting cast has no shortage of unconventional characters, as shown by the fact that he himself is a recluse with disfiguring burn scars who spends either all or almost all of his time in his office concealed from sight.

Summed up, Goliath has plenty to offer interested individuals, with examples ranging from outstanding legal drama to some of the more interesting characters that can be found on the TV screen. As a result, people who are interested in something exciting should not hesitate to check it out, particularly since the first season is just eight episodes long.