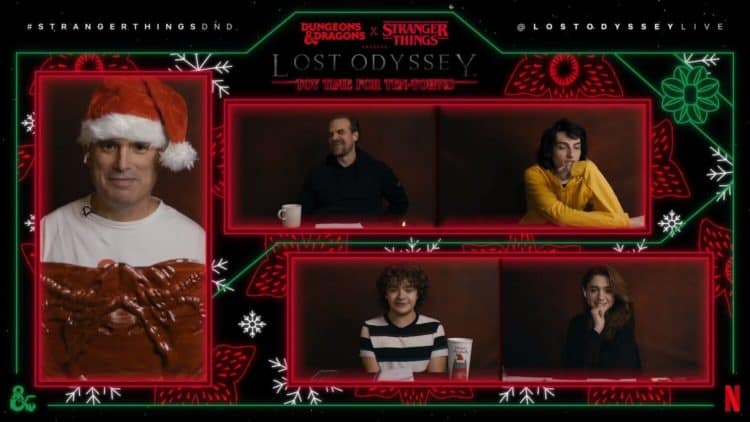 If you’re thinking that this D&D session is wild, then it’s likely that you’ve either played with a level-headed Dungeon Master, or with a group of people that either didn’t really know what they were doing or were bound to do just about anything to make the story interesting. The great thing about seeing a few of the cast members of Stranger Things engaging in a lively game of Dungeons and Dragons is, of course, that it kind of reaffirms the presence of the game in the series, but also that the cast does know how to use their imagination in order to get through a session. But for anyone that’s ever played D&D, they’ll know that a session can last for hours on end and can get pretty crazy. Depending on how a DM runs their session, things can get pretty crazy, but it’s the DM’s job to keep things running on an even keel and not let a session get too out of control. The trick of course is that the players need to be respectful as well and actually listen to the story while deciding what they want to do, as in what skills they want to try to use, what feats might help out, and what the consequences of each action might be. This is just one of the ways that the game of D&D can hook people in, since after making up your character, you can do pretty much anything with them, or at least try, but the DM will typically have the final say when it comes to the game. Even the DM has to follow the rules though if the game is going to continue to be fun, which means random chance is where the buck stops, meaning the dice rolls that determine the outcome of each action.

As you can see in this clip a D&D session can go for a while and there can be a handful of decisions made in a matter of seconds or there can be a great deal of narrative going on that can either hinder or help to expand the story. The more story that is given, the better the players will understand what’s going on and what they will be able to do since it will give them a greater understanding of what to expect and what their characters are facing. Doing this online is a bit of a challenge since having the map, the miniatures, and the people in the same room helps immensely, but thanks to the pandemic this isn’t all that safe, and online is about the only safe way to do this. Still, the idea of playing D&D is appealing at this time since it’s just one more way to keep people interacting with each other, and to give them a bit of fun since the storytelling part of the game can be a lot of fun.

One thing about this game though, apart from many of the books and items being insanely expensive, is that it does require a lot of prep time to get things ready. The DM is going to be the busiest person in the game since they have to either read up on an adventure and understand how to present everything to their players, or they have to come up with an adventure on their own and plan it out step for step if they want their players to be engaged and have fun with it. From personal experience, it’s kind of hard to get used to thinking about every little thing, from the terrain to the NPC’s (non-player characters) that go into a story. Dice rolls account for quite a bit of what the players will experience, as the DM’s Manual comes filled with suggestions and ideas for world-building that can help a DM to create something that people will find intriguing enough to stick around for. There are also guides for the players that can help them to customize their characters and experience new facets about their class that might be useful. Of course, the added books are typically used under the discretion of the DM, who is the one running the game and the one that can say yea or nay to new books being added. Hey, it’s a lot to read and keep track of, and some DM’s will gladly say no to the many different books that are out there in favor of running their own campaign.

But since D&D was such an obvious part of Stranger Things, to begin with, it’s kind of fun to see a few members of the cast having fun with it since it likely gives the fans a treat by showing that a few of them were up for a session. But yeah, a D&D session can literally last for hours, so it’s a bit of an endurance trial depending on the DM.