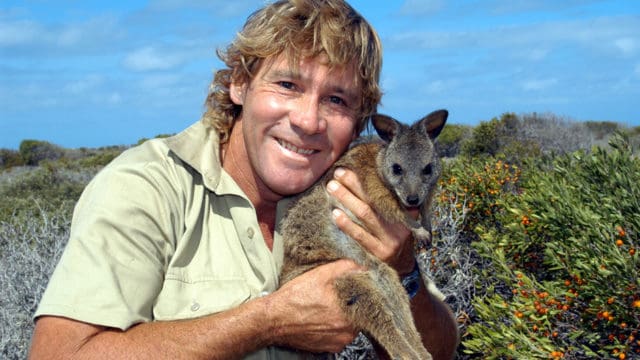 It’s been a little over a decade since Crocodile Hunter Steve Irwin passed away. The popular actor and show host was known for his upbeat attitude and vast contributions to the study and preservation of wildlife. But it should come as no surprise that whenever he was around animals he was as cool a customer as he could be.

In the video below you can see Steve with another show host as he’s talking about the python he has coiled around his shoulders and neck at the moment. The snake is slowly coiling around his throat as he continues to talk, relaying that it’s not poisonous and has no reason to constrict since he’s not being threatening and is in no way panicking. That doesn’t stop the suddenly rascally snake to keep from clamping onto his neck however.

If you’ll notice the TV hostess looks a lot more worried than Steve as she appears almost ready to jump in and save him or increase the distance between them. Steve though is quite calm about it. And why not?

He just got done telling her that the python isn’t venomous, won’t constrict because he’s not a threat, and isn’t about to get violent since it can’t swallow him. She’s exhibiting a lot more fear simply because it is a snake and has a rather nasty reputation in the wild. That’s a big part of why people don’t trust snakes because they do have a rather negative reputation. Steve though knew very well what he was doing and likely it wasn’t the first time he’d been nipped or bitten so he knew just what to do. And sure enough, when he kept his calm and started to lift the snake away it let go.

That’s poise, and that’s having confidence in what you do and knowing just how to react. The guy was mocked a great number of times during his life and sadly it still happens to this day, but he knew exactly what he was about and didn’t panic at all, at least not on camera. It seems safe to assume that he didn’t panic that much in real life either, if at all. In his line of work however to panic was to make himself a target and that just wasn’t acceptable, ever.

The kinds of animals he used to deal with were anything but friendly if they were provoked and showing fear to those types of animals is typically a bad idea. Perhaps when he was first starting out his nerves were always on edge, but throughout his life it seems plausible to believe that he might have still be on edge at all times but still able to hold his ground more often simply because he knew what he was doing and didn’t feel the need to panic if something untoward happened.

It was a sad day when Steve Irwin passed, especially given all that he’d done only to be stabbed to death by one of the supposedly most docile creatures on the planet. But any animal will tend to become a lot more dangerous when it’s boxed in and feeling pressured. Steve was a cool and calm character right up until the end though. That was just who he was.