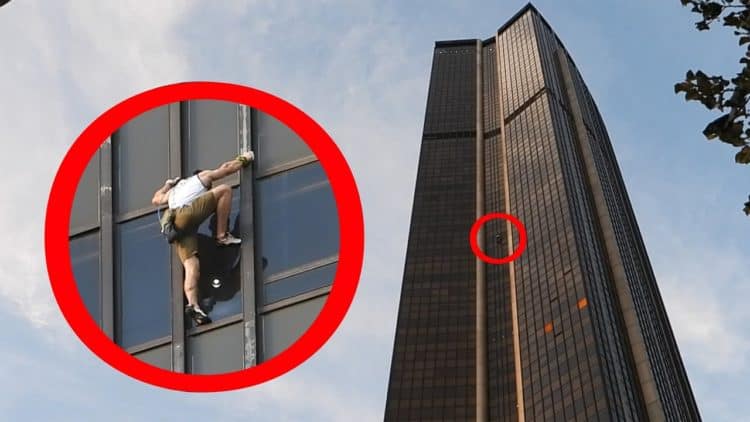 If you can’t really watch this without getting anxious it’s easy to understand since some people have a real issue with heights, and the GoPro this guy is using is bound to make some folks a little queasy simply because the view is a bit too much to handle. Dubbed the Silesian Spider-Man, this guy decided that it would be a good idea to free climb the second tallest skyscraper in Paris, the Montparnasse, which stands at 689 ft., or 210 m. This guy ascends in a way that would likely horrify pretty much anyone since he doesn’t have a rope, he has no harness, and despite being in great shape he has no other safety measure that could possibly save him if something bad did happen. Thankfully nothing bad does happen, and to be certain, the guy even starts singing at one point since apparently, he’s having a great time. As you can imagine, people actually stopped to view his ascent, and an emergency worker was called in to try and get him to see reason and come down. Obviously, no one wants to see another human being die in this manner, but it does feel as though the emergency worker would make it worse since the concentration needed for a stunt such as this could possibly be ruined if a person keeps nattering in their ear the entire way up.

This is typically something one would see in a movie such as Mission: Impossible or in Spider-Man since the act of scaling this building is one of absolute lunacy given that the possibility of failure means there’s no way to come back from it. The level of confidence this would take is astounding, but in the end, it would still be deemed as more than a little crazy since few right-thinking individuals would ever want to attempt it. What did happen at the end was that BNT, as he’s also known, was led away in cuffs, as the crime of trespassing is still quite serious in many parts of the world. Considering that he’s made other videos it feels hard to say whether or not he’s stopped since one might think that the fines and the trouble he’s risking might stack up after a while, and the fact that he’s in his 30s could mean that at one point his body will tell him that enough is enough. Buildering, as it’s known when a person climbs a building apparently, has been done by a few people around the world and it does sound as though many of them have been taken to task for it. Including parkour and other activities done in so many different videos on YouTube, the acts that are committed are quite illegal since a lot of times the individuals engaged in the activity don’t have permission from the building owners to treat their property like a jungle gym. Plus, just imagine if anyone does get hurt on these ill-advised adventures, the building owner is likely to be on the hook for not stopping the activity when they could.

Many people might see this as an awesome and spectacular feat of endurance and strength, and to be quite honest it is since the sheer willpower and determination to climb this building is amazing. But for all that, it’s still not a great thing to idolize since climbing a mountain is one thing, but climbing a public building when you don’t have the permission to do so is entirely different. Not only that, but a mountain will typically have a great many hand and footholds that an experienced climber can find and utilize, whereas buildings vary widely in their composition, and on top of that, anything can happen once a person goes high enough and fatigue starts to set in. The idea of living life to the fullest is great and all, and going to the extreme and not allowing anyone to impose their rules on you and all of that kind of stuff is what some people want to push, but the main fact is that BNT was trespassing, no matter how much of a buzzkill that might appear to be. It’s very easy to praise him for being this strong and in this good of shape, and of course for not slipping and falling to his death. But at the same time, it’s enough to want to Gibbs slap the guy upside the head and ask him what he was thinking.

Like it or not, there are crazy moments that go a little beyond since had he lost his grip it’s very likely that this video wouldn’t have been aired since it would have been deemed unfit for YouTube. But also taking that into perspective, BNT would have helped to traumatize a good number of people. Sometimes it’s not about being wild, crazy, and free. Sometimes it’s about thinking before you do.