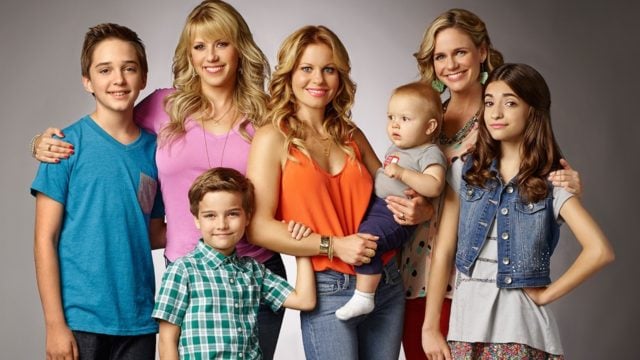 The best way to watch Fuller House episodes online would be on Netflix as they’re pretty good about keeping up on the most current episodes. The Tanner family has certainly undergone a lot of changes since the days when the girls were still little and the Olsen twins were considered the cutest kids on TV. Now the kids have kids, the adults are just about out of the picture it seems, and the Olsen twins are nowhere to be found. And for your viewing pleasure the whole bunch of them are shown on Netflix as they continue to grow, change, and bring new bouts of drama and hilarity to a sitcom that many people thought would never return.

Why the Olsen twins never came back is something that’s been explained but never quite forgiven since they were in fact one of the reasons why the show was so popular. But given that they have their own empire to run it’s understandable how they couldn’t spare the time. If you look at it the only ones that really had anything of a career after this were those that went on to star in Lifetime movies and make cameos now and again in B movies or popular TV shows and movies where they were there and gone after a few minutes or an entire episode. After all John Stamos and Bob Saget managed to show up on Law and Order: SVU in different episodes. So it’s fair to say that each one of them has done their fair share after the initial run, but somehow there was enough of a fan base that people wanted them back. It was hard to fathom really when it became a reality but it was still obvious that it was happening.

But it’s not complete. The show of back then is still not quite what exists today. Back then it was different as many people could possibly attest to, as is only expected. Now it feels as though the show is hanging on by a few sturdy straps that represent the fan base and could be taken off whenever the fans decide to move on. So if you want some advice, watch this show for every episode and enjoy every last one just in case something does happen eventually and the entire cast has to say goodbye one final time. While Full House was in fact loved by a lot of people it wasn’t enough to stop the inevitable from happening, and while it’s popular yet again it’s still diminished somewhat since it’s not what it used to be and the kids we grew up with are now the adults that are nowhere near the same as they once were. Nostalgia being set aside, people have grown up and their interests and mannerisms have changed just enough that the show is something completely different, which could be what’s keeping it alive.

So if you have the inclination head on over to Netflix, pay the $10.99 it takes to get the ball rolling, and watch to your heart’s content.