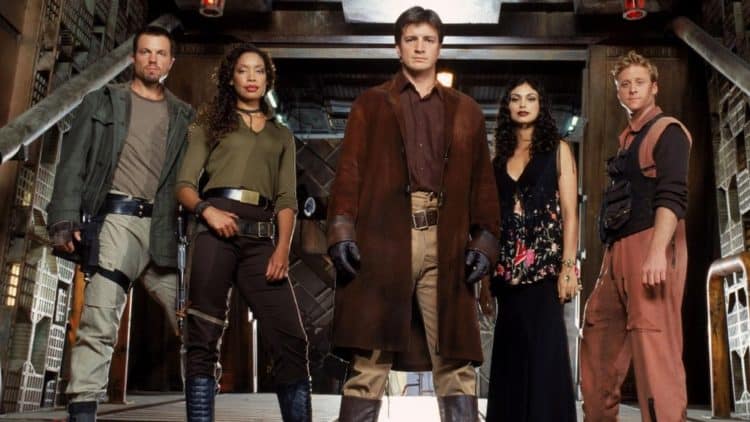 Alan Tudyk is by far and large a talented man that thankfully has quite the following when it comes to his various roles in pop culture. It’d be tough to say just which fan base holds him in higher esteem, Star Wars or Firefly, but the guess would be the latter since his character Wash has been around a bit longer than K-2SO from Rogue One, though it does sound as though the droid will be making another appearance in the Cassian Andor series that will be coming to Disney+ eventually, as Kirsten Howard from Den of Geek has stated. In the meantime, enjoying the various things that Tudyk has done in his many roles is still a lot of fun, as this look back at a scene from Firefly that’s been reenacted in Rogue One is pretty amusing. The Imperial droid K-2SO is a curious figure to be certain and unlike many droids in that he does have a very wide-ranging imagination and freedom of thought that a lot of the other droids in the Star Wars universe haven’t really exhibited. Of the lot, only a few have ever really shown this kind of cognitive ability and of those only a few have ever expressed it in a manner that wasn’t highly refined or somewhat practical. It does stand to reason though that when K-2SO was reprogrammed that he would be given a little more autonomy in order to be far more useful and less reliant on his programming and certain parameters that would allow him to do or say one thing or another. But an imaginative droid is still highly amusing since it’s a novelty that we don’t get to see in Star Wars all that often. Throughout the rest of pop culture it’s rather prevalent since just being a machine doesn’t appear to mean that there should be a distinct lack of personality that many droids have been seen to have from one show or movie to another.

Out of all the characters that Tudyk has taken on, and he’s had a few notable roles in his time, K-2SO is likely one of those that was among the funniest even if he’s involved in a story line that’s meant to be far more dramatic. The manner in which he interacts with the humans he’s allied with is very humorous since it gives the impression that he and Cassian are more than just fellow Rebels, but are also good friends no matter how serious Cassian always is. The fact that he can anticipate Cassian and that the human spy puts up with him indicates that the two rely on each other and that K-2SO is constantly looking out for his human counterpart no matter what his orders are at the time. Plus, watching the droid smack Cassian as part of his cover in front of the storm troopers in Rogue One was kind of amusing since it showed a level of wit and quick thinking that a lot of droids simply don’t possess. One could argue that R2-D2 might be close to K-2SO’s level when it comes to humor but somehow the former Imperial droid is just perfect for his story and would be kind of out of place in the current trilogy.

It’s almost always funny to see scenes from other movies or shows reenacted in other projects as kind of an homage, but seeing them reenacted more or less by the same person is even better since it gives the impression that nothing has really been taken and that the scene is done more out of respect than a need to copy anyone. In fact the scene definitely injects a good amount of humor in a movie that was designed to be pretty dark and foreboding since, after all, the Rebellion was going after the plans for the Death Star and as a result had to kill a good number of people that might have been innocent enough but were still valued by the Empire and thus couldn’t be allowed to remain in their employ. Jonathan Olley of Wired has more to say on this matter. Killing them all sounded absolutely brutal, but it also painted the Rebellion in a light that was anything but good since it reminded people that the Rebellion was capable of being slightly underhanded as well to get what they needed. Rogue One was not the typical Star Wars movie since not only did have little if anything to do with the Force or the Jedi and Sith, but it showed the darker, dingier side of the story that we don’t always see since the ideology of the Jedi is often a very dominant force in the Star Wars universe, and in many ways it allows an easy out when it comes to the story. It’d be great to hear Alan Tudyk’s voice in future projects, but at least we know he’ll be showing up on Disney+ eventually.