Home
Television
Video Shows Us How Santa Claus Adapts to 2020 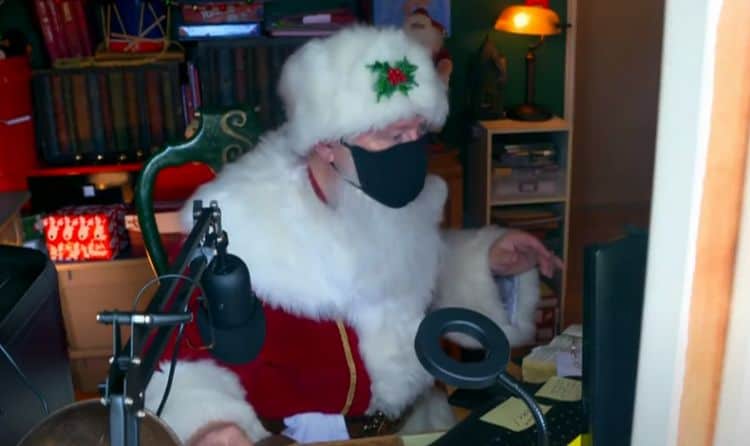 2020 has not been an easy year for anyone to be certain, but with one of the greatest and most expected moments of the year, the one that kids all around the world hope for, it’s a little harder considering that they can’t sit on Santa’s lap and tell him what they want. It would appear that it’s just as hard for Santa’s helpers as well since some of them have had to learn to navigate the internet so that they can reach out to the children of the world and spread their holiday cheer as much as possible. While some haven’t had as much trouble as others, there are those that have had to learn how to operate Zoom and adjust to using the current technology in order to keep up the belief that Santa is still watching and that kids can still connect even if they can’t gather in great numbers to wait in line so that they can tell Chris Cringle what they really want. How in the world does one explain to a child that they can’t see Santa Claus this year because of the pandemic? Some folks have found a way to do this that might not scar a child, but thankfully, technology is giving Santa a way to adjust and preserve Christmas in a very easy manner. It’s still not quite as great as the real thing to be certain, but it’s better that kids are able to see and connect with one of Santa’s helpers rather than go without if only to keep the spirit of Christmas alive and well.

The idea behind this is sound, but like some people might be doing, it’s important to remember that the spirit of Christmas, the idea of it, is so much more than what we’ve made it to be. While this idea is fundamental to the holiday and inspires many to treat others with kindness and respect, it’s still a tad bit difficult to word such a belief in a way that kids will fully comprehend. This is what Santa Claus is for in the case of young children who believe and need to see that symbol. Santa Claus has been an important figure in the lives of so many children over the years that to even think of not seeing him this year is asking a little too much for anyone since with the way this year has been going, many people need a pick me up, kids included. Thankfully, the Santa’s have responded by hooking up to the internet in a big way and spreading the holiday cheer in a manner that many kids are able to access and can enjoy since unlike online schooling, this is something they’ll actually be looking forward to.

It’s not as though Santa Claus hasn’t been changing throughout the years, but the fact is that only a short while ago, seeing Santa online wasn’t a necessity, it was more of a luxury that people could enjoy if they couldn’t make it out to see the big guy for one reason or another. Now, it’s something that we kind of have to do in order to keep that social distance and make certain that we’re not putting anyone in any undue danger. Wearing a mask on a Zoom call is a bit much if anyone ever does it, but in these uncertain times a lot of people have done a few silly things that, when weighed against everything else that’s been happening, aren’t really that big of a deal. The main point here of course is that Santa Claus, despite not being as accessible as he’s been in previous years, has found a way to keep on spreading the Christmas cheer to the kids of the world in a way that many kids can fully enjoy with their parents’ help. While it’s true that not every kid has a computer and therefore can’t fully enjoy this chance, there’s a big hope that it will still be something that a lot of kids can enjoy, while perhaps some kids will be able to mask up and either visit a Santa here and there that might be able to take the same precautions in order to say Merry Christmas to those that they can reach.

It’s been said many times and it might be said many more, but this has been a very trying year, and a lot of people have reached this far and are feeling as though there’s nothing left to look forward to, but Santa Claus is still here to help put a positive look on the holidays and to see a child smile after talking to Santa is definitely worth it. Keep in mind that just as much as anyone, Santa has had to change things up too, and the effort is appreciated.