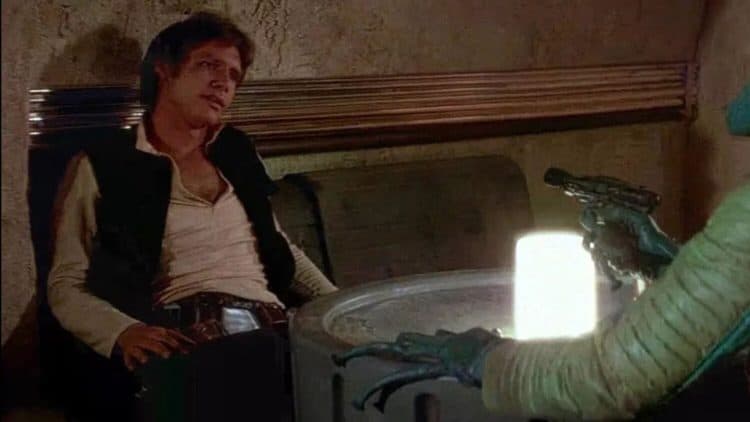 The debate of who shot first is still something that Star Wars fans are willing argue about, believe it or not. Thankfully this trio decided to see just what it would be like to view the iconic scene from several different points of view, thereby creating a parody that’s sure to keep some folks laughing and the most diehard Star Wars fans either grinning or wanting to know just how any of it makes sense. Seriously, there are people out there that would criticize a parody like this without realizing that it’s supposed to be fun. When you break it down the whole issue of who shot first is kind of pointless since the obvious fact is that Greedo was trying to turn Han in for a bounty, dead or alive, and Han was just trying to survive long enough to take on the next job that would presumably get him paid. In a big way it’s kind the difference between criminals that people are being forced to choose between if they become this invested in the movie since Han isn’t exactly Mr. squeaky-clean at this point in the movie and Greedo is an obvious thug that’s getting paid to hurt people. Wherever one’s moral compass falls is usually the determining factor as to who was in the right when it came to shooting first. Alex Abad-Santo of Vox has more to say about the subject.

The variations that the group use to show this memorable scene however are kind of hilarious since it is a little obvious how things have changed since the original was made and the ricochet effect was downright funny given that it would mean that Greedo was responsible for his own demise. Obviously that’s not how it happened in the movie but it’s still hilarious just to think about. Then there are the different endings to the scene, of which Jar Jar Binks being shot repeatedly by Han is one that many might be able to get behind since Jar Jar might not be the most hated character in the series, but he’s definitely still someone that a lot of fans would gladly get rid of if they could. Overall this scene is one of those that’s easy to look at and say ‘who cares?’ since it’s one scene throughout the entire movie in which a character meets an impediment that has to be moved through, around, or over in order to get to where they need to be, and in true outlaw form, Han finds the quickest solution possible. The question of who shot first has kind of muddied up the reason behind WHY Han shot first since people, for some reason, don’t get the idea that a bounty hunter looking to take a person dead or alive isn’t your friend in that moment, they’re an obstacle to be moved through. The ideas of Han shooting Greedo with no consequences is of course a mark of how lawless Mos Eisley really is since the only way to keep law and order in the place is to be the bigger, badder individual or have something that people can’t do without and can’t possibly take from you.

What’s really amusing however is what happened after this scene in an anthology book that likely belongs to the Legends canon now, unless of course it’s so inconsequential that it’s considered okay to leave it in. Greedo’s body was disposed of eventually, but it was done by the bartender that ran the place. What this means is that Greedo’s body was ground into powder and used as a drink ingredient for the patrons, who likely would never know that they were imbibing dried Rodian unless someone told them, which of course the most shady of bartenders wouldn’t since they want to turn a profit. As if the idea of being taken out by a smuggler wasn’t bad enough, Greedo’s final contribution to the galaxy came in a broken down bar in Mos Eisley as a mixer for cocktails. It’s not the worst of ending really but it is one of the strangest since the idea that was brought up in the anthology was one that might have made a few people sit up and say ‘what?’.

That being said though this whole argument of who drew first has been kind of silly from the get since it doesn’t really matter. The end result was that Han got away, Greedo was crispy fried, and the story moved on. How many people really thought about Greedo once it was all said and done? The idea that anyone would bother saying ‘poor Greedo’ after the Millennium Falcon raced off of Tatooine is kind of hard to swallow since he was a bit character that didn’t really warrant much of an afterthought. At the very least Greedo’s death was quick, as he wasn’t foolish enough to pick a fight with Luke or Obi-Wan, or Chewbacca for that matter.