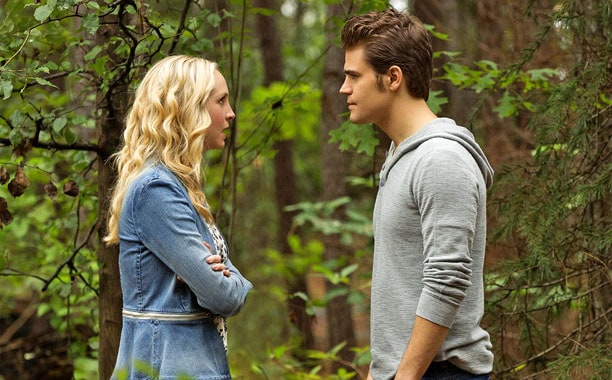 Ian Somerhalder wasn’t kidding when he teased that this season will be reminiscent of The Vampire Diaries‘ early years.  It’s definitely been a while since we’ve had one of those crucial “wait, what does this mean?!” moments before a commercial break.  Even the last season finale when Damon and Bonnie were stuck on the Other Side, you knew in the back of your mind that they’d find a loophole and survive.  That’s what everyone on this show does best: cheat death.  When several characters found themselves in danger in this episode, they relied on their trusty magic to save them.  Only one person surprised me, and her actions have changed the course of the season in my mind.

Last week Alaric tried and failed to compel Jo after the disastrous corn maze accident.  I had her pegged as a simple love interest for Alaric that he frankly didn’t need at the time.  Following her big role in the plot twist this week, I’m conflicted.  She refused to just move Alaric a few feet over across the Mystic Falls border so that his vampirism would heal the wounds that were killing him.  She prides herself as being a smart woman but she wouldn’t listen to the man as he told her how to help save him.  Then again her smarts are what saved him, although not in the way anyone was expecting.  He’s no longer a vampire, or an Original vampire to be exact.

Way back in season three, Alaric chose to die rather than complete the transition into becoming a full fledged vampire.  He was turned against his will by Esther but he ultimately had that little choice in the matter.  Ever since he was resurrected from the Other Side, he’s been struggling with the adjustment.  He couldn’t exactly kill himself given the fact that he was granted this second chance at life while his best friend was presumed dead or lost in the great unknown.  So yeah, Jo saving his life is a huge deal and I’m happy for him.

On the other hand, I’m disappointed.  I was really looking forward to the potential storylines going forward that could involve his powers as an Original vampire.  So far those powers only came in handy when Elena asked him to make her forget all the good memories of Damon from her mind.  As long as he remained a vampire, he would’ve been able to give her all those memories back.  Unfortunately, she waited until it was too late to change her mind.  This is a hot topic for debate because we know from the past that when a vampire dies, their compulsions are void.  Technically Alaric didn’t die, his magic just wore off.  Or maybe it’s possible that he’s still a vampire?!  Think about it: Originals are indestructible.  I doubt the Travellers’ curse on the town would have any effect on the Mikaelsons, the true OGs.  Sadly, I think Alaric is really cured in this case but I can dream, right?

There’s still lots to learn about Jo.  Through Elena’s powers of deduction, she figures out that Jo is a witch.  She doesn’t deny the accusation.  A witch who relies on her medical skills rather than her magic seems like someone who could come in handy with rescuing Bonnie.  There’s been plenty of talk about some Gemini witch coven that created the other dimension where Damon and Bonnie were trapped with Kai.  I’d venture to guess that Jo is probably one of that very coven, or at least has ties to them.

Bonnie’s life in Kai’s hell wasn’t shown in this episode but her presence in the real world was sorely missed.  Naturally, Jeremy went to Damon for answers about her.  His decision to spin a little lie that she wasn’t with him because she found peace was an honorable move.  I get that he’s hoping to put Jeremy at ease and allow him to start to let her go.  Then Damon leaves Bonnie the cutest voicemail.  He actually misses her!  Hopefully, his mission to woo Elena doesn’t entirely distract him from searching for any leads to save Bonnie.

Let’s talk about the relationships.  The Delena epic love story is far from over.  Elena was being stupid and childish by refusing to even see Damon when he first returned.  I don’t buy that her feelings for him are completely gone because otherwise she wouldn’t have been so scared to open her door and see him face to face.  Worst case scenario: they’ll start over and maybe down the line she’ll start to regain memories due to some greater magic in the stars or something like fate.  Either way it’s a win-win for the viewers.

Stefan and Caroline are slowly on their way towards each other.  Even though Caroline told him that she doesn’t want to be friends anymore, we all know to read between the lines.  Stefan’s going to make amends for everything he’s put her through these past few months.

Of course, now Tripp knows who almost all the vampires are.  He ran away from the car accident surprisingly fast but that won’t be the last we see of him.  In addition to Tripp’s personal vendetta and Jo’s reveal as a witch, we can’t forget about Sarah.  She’s sticking around even though Matt told her that her last surviving relatives are vampires and her parents are obviously dead.

What did you think of the episode?  Share your thoughts or theories!