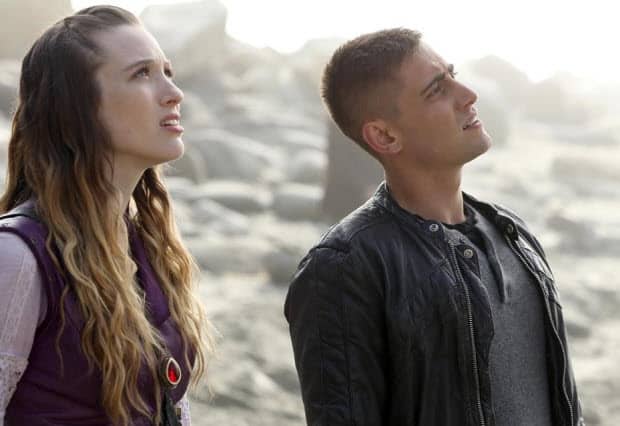 It can’t be stressed enough that Jafar is not only the most compelling and powerful antagonist in Wonderland, but also as one of the strongest villains that exists in the Once universe. Not only has Naveen Andrews portrayed Jafar so closely to the Disney version, he has made this character a bigger force to be reckoned with.

One of the reasons for that is because of the origin story that the writers has established for this character. Who could have imagined that one of Disney’s biggest villains would have such a dark and tragic backstory? While the effects are getting slightly better and the fact that they are giving the viewers’ more scenes in the forest to act as Wonderland, the show has definitely a better job with Agrabah whenever they have flashbacks to Jafar’s past. If they ever do a spin-off again, they should definitely consider doing Once Upon a Time in Agrabah and introduce Aladdin.

Regardless whether this show gets a second season or not, there better be plans by the Once writers to have Jafar on the original series for a couple of episodes and see how Emma and the gang would deal with someone like him. It would be a shame if they didn’t use a great character like Jafar on their show when they have someone like Andrews portraying him. Agrabah

The speculation that some people had about the man in the other cage being the Sultan aka Jafar’s father was always a good idea and it was nice to see that those people were right. With the talent that Brian George brings as an actor, it’s appreciated that they gave him a role that is big and essential to Jafar’s character.

What can be noticed however is that the present Sultan is a bit more kind then he was in the past. The scene when young Jafar is trying to connect with his father for the first time was an important moment and the point when Jafar became a villain that was understandable. While it doesn’t make his evil motives acceptable, one can understand why he became the man he is today. One thing that was so easy to feel during this episode was hatred toward Mizra who was a coward and a brat. He definitely deserved to get killed by Jafar when he wasn’t willing to fight for the Sultan.

Despite that Jafar was impersonating Alice’s father, it was still meaningful to see Alice letting her emotions out that she has been holding back for a long time. It has been mentioned several times that Sophie Lowe is one of the breakout stars this season and this episode proved that point once again.

One thing that was enjoyable with this episode was seeing how smart Jafar is when he decided to kidnap Alice’s father. He took notice of everything that Alice’s father did so that he could copy that, for example noticing that he is left-handed and the thing he did with the glasses.

It was also a good way to test Alice as a character to see if she could notice if the man that looked like her father was the real deal or not. The best moment was when she realized that he was an imposter when he started eating immediately without saying grace. It’s all about those tiny details.

The scene when Jafar was threatening to let Alice’s father die in front of Alice and Knave was also a good test that ended up being one of the most emotional scenes between Alice and her father. It showed how tragic their relationship has been this whole time and it was heroic to see her father being willing to give his own life by telling Alice that Cyrus has escaped.

Because of this, Alice had to use another one of her wishes to save her father from falling to his death and now she only has one more wish. It’s probably safe to speculate that she will most likely use it in the season finale.

Overall, “Bad Blood” was a much stronger episode then previous ones because of its writing as well as the performances. The cast has grown a lot, episode after episode and the arc has progressed in a good pace.