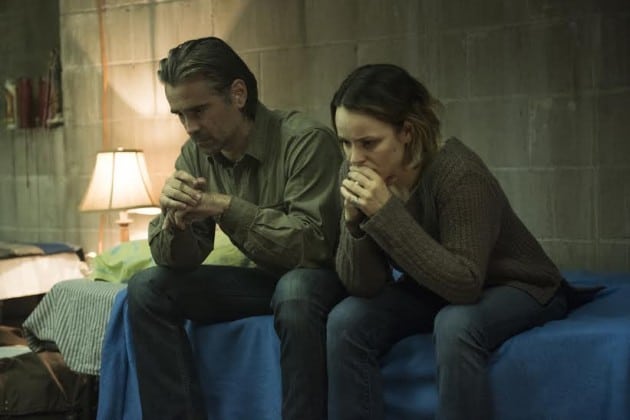 Vacillating between West Coast noir and by-the-numbers cop drama all season, True Detective‘s tale of Vinci and corrupt sex-craved politicians was never able to find its footing, its self-serious nature often bordering on nonsensical as True Detective seemed to both embrace and reject the conventions of crime noir. “Omega Station” is a culmination of that split identity, an 80-plus minute finale that is very much the whole of the show’s second season, a ridiculous, lengthy romp through a series of exposition dumps and expertly-shot action scenes, whose violence only further highlights the amazing lack of substance this season of True Detective displayed.

In many ways, it makes “Omega Station” simultaneously the best and worst episode of the season. It begins with the incredibly long scene between Frank and his wife, exhibiting the show’s running commentary on the noir genre (the corrupted “hero” making sure his girl gets out before he heads to certain death) while also engaging in some of the most saccharine character material True Detective‘s ever offered, particularly when Pizzolatto’s script makes the point to the audience over and over again that this is the end, and Frank knows his life will soon be over (“maybe not today, maybe not tomorrow”… you know the deal).

As the finale continues, it gets more and more preposterous, even as the performances of the main cast finally get a chance to shine, occasionally free of the constant info dump tying up loose ends to explore characters at existential cross roads. Like Frank, Ray knows he’s probably going to die (lest we forget, his father told him back in Episode 3), and as he contemplates that, True Detective is finally able to draw the parallels between him and Frank they’ve struggled to find all season (be it writing or performance, those two have never clicked the way the show needed their relationship to), depicting two scarred men as they descend into the darkness within themselves for the final time, each of them trying to find peace in the lack of resolution and redemption offered to them by the cruel world around them.

“Omega Station” has its finest moments when the cinematography takes over: Frank’s last steps and Ray’s last run through the woods provide some of the show’s most haunting, lush imagery, the empty flat of Frank’s final resting place sitting in perfect contrast with the gorgeous forest Ray ends up in, running from Burris (who killed Woodrugh last week) and his team of commandos as he tries to upload one more voicemail to his son. Those sequences, intercut with Ani making her escape to Venezuela with the help of the scarred bar owner, are the most evocative moments True Detective has produced all season. It’s as far away from the convoluted plot details about the railway and the shady corporate powers we never see pulling the strings, and it allows the performances of the central three characters to breathe in ways the previous seven hours have refused (save for a few scenes with Ray).

I enjoy the dissolves of Ani’s face emerging from the forest and ocean water, and I love the image of Frank looking back at his own body in the sand and being disappointed. However, pull back from those images and explore their context, and “Omega Station” quickly begins to fall apart. Ray’s son holding his police badge cube at school, the ghost of Frank’s father screaming “I never loved you,” the fact Bezzerides and Jordan are sidelined FOR THE ENTIRE FREAKING EPISODE for her “protection,” the fact a bitter, disturbed orphan is responsible for upsetting the entire underworld of LA, how the tangentially-related-to-the-story Latino gangsters take out the masterful Frank Seymon. While I appreciate the finale’s nods to noir and its dedication to telling a complex police investigation, the winding, California-freeway like path the series takes to getting to that truth is so obfuscated, so buried in the tiniest of details (the orphan shot Ray? What the what?) that it undercuts every single scene, rendering it a lot of loud noise getting in the way of what are a solid trio of performances at the center (even Vaughn is able to wring some life out of the material; his “Hey, that was a big f***ing rock!” line to Jordan when she throws his ring is fantastic), and topped of with the middle finger of Ray never getting his message through to Chad before he finds out what his father meant a few episodes ago when he told him he “wouldn’t be quick enough” and would get “shot to pieces.”

As always, the bad guys win, and Woodrugh gets a highway named after him. Jordan and Ani end up in Venezuela, where they raise Ray’s new son (of course Ani was pregnant; she cried the moment she felt Ray die! She’s clairvoyant and hormonal!), and Chessani’s son (who had all of two scenes before this episode) gets away with murdering his father and becomes mayor. Ray never gets to send his kid to Yale, and Frank never gets to see Jordan in a white dress alive (maybe that would cure his little uh… downtown issue?). Hell, even the lounge singer walks out in the end, her soul as empty as Ray’s gas tank in the redwoods of a California forest. No matter how pretty “Omega Station” may look nor how strong the performances were, none of the many resolutions offered from the 1400 loose ends tied up land, either coming without involvement from our main characters (which may be a reflection on the noir genre, but one that completely removes any emotional engagement, particularly when the personal character stories are so trite), or seeming to exist only to tease our doomed ‘heroes’ of the world what they’ll never achieve.

There’s something to be said about how True Detective tells stories about people trying to reject who they once were, and struggling to evolve. Yet tied into the lazy masculine metaphors and unnecessarily convoluted tale of murder, sex parties, and political corruption, that story becomes lost in a sea of goofy exposition and obscure details. “Omega Station” reflects that as perfectly as a finale could: while it is able to engage the audience through performance, the material informing said performances undercuts them. As fun as “Omega Station” can be in moments, it finds itself in the position of its male characters in that it cannot escape who it is, so we’re left with a string of dead fathers, two women forcibly removed from the main story, and a journalist who probably has no idea how he went from getting punched in the face by Detective Velcoro, to taking a wealth of information about corruption, sex, murder, and money from Ani in the middle of Venezuela (seriously: California newspapers have that kind of budget?), bringing this season to an end the only way it could: with an elegant, dull thud, thousands of miles away from where the entire story was set. Thanks for the memories, True Detective?

– I imagine Twitter exploded when Jordan told Frank he “couldn’t act for s***.”

– Ray knows he’s dead, so he can finally embrace his inner cowboy, and be his authentic self. How charming.

– Ani wants to talk about her rape, right after having sex?

– The hard drive they’ve been chasing all season? It was blank.

– Ani actually acts if somebody “suicided” another character.

– Ray put Scarred Waitress’s attackers in prison, and Frank funded her bar on his own dollar before signing it over to her: what Honorable Men, these two are.

– So the jewelry store owners got killed when Ben Caspere found out the mother was pregnant with his second kid (the sister we saw last week? His first child with her), and then they stole all their diamonds. I wonder who ended up with all those – and who managed to fish out the $3.5 million in diamonds he had in his pockets.

-Thanks for joining me this season of True Detective – always remember Conway Twitty, bird masks, and where to find a knife when a sex party gets out of hand.