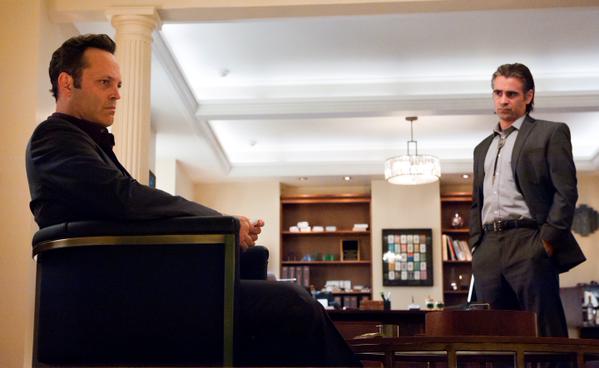 “Other Lives” picks up some two months after the climatic shootout of “Down Will Come” – and as expected, there hasn’t been any peace found for the angst-ridden protagonists of True Detective‘s second season. Velcoro’s quit the police force altogether, Woodrugh’s working insurance fraud, and Bezzerides is spending time in the sheriff’s office while she attends her sexual harassment classes. Their lives have moved forward, but only in a physical sense. Stuck in the same emotional cycles of anger and depression, the most telling sign of “Other Lives” is how little things have changed in this season’s time jump; save for Velcoro shaving away his mustache, there hasn’t been an inch of progress in our least favorite lives or murder investigations, continuing to pile on the allusions and threatening to completely lose the audience along the way.

While early hours of TD’s sophomore effort initially seemed interested in the philosophic undertones of our anti-heroes, later episodes have streamlined those characterizations in order to make room for more obfuscating plot details. Frank reveals his waste management company polluted a massive portion of California to secure low real estate prices, making it easier for the city to purchase it and allowing for their corrupt process carry on as it usually does. There’s sex parties and cash coffers, and more talk about the sick, twisted pervert thief known as Ben Caspere, the uber-corrupt politician who apparently used these massive parties with fancy invitations to procure blackmail material on his colleagues. These details go on and on, to the point that most of this entire season gets boiled down to Woodrugh and Bezzerides hunting down a missing hard drive; while this is certainly a little more measured than the ludicrously-overlooked city massacre that ended “Down Will Come,” it sucks what little life is left in the room when everything hinges on finding a hard drive with footage of political characters that are either non-existing entities, or the laughable antagonist known as Mayor Geldof, who drinks himself to sleep in his office and generally acts like an aloof idiot.

This overwhelming amount of plot feels like a distraction from the empty character material at play, led by Frank’s sudden ability to master his impotency, despite his life continuing to fall apart (the mansion is gone, and The Poker Room is turning into The Poke-Her Room, if you know what I mean). I appreciate how hard everyone is trying in these scenes, but it doesn’t work; not only does Frank’s relationship with Jordan feel lifeless, his sudden ability to reclaim his masculinity while losing control of his life contradicts a lot of the material that preceded it, a plot development that only comes to light after Jordan mentions she’s had three abortions (or “operations”; it seemed clear what she was hinting to, however), a fact that somehow reminds Frank how to be a man again, for some odd reason.

Then there’s Paul’s story with his caricature of a mother (she took the $20,000 he made in Afghanistan that he tried to hide in her trailer for four years; you’re an idiot, dude), spitting off about how she’d “have the world” if she was only born as a man (preferably with one of those girthy members that Bezzerides makes snide comments about in her sexual harassment classes, I can imagine; since all girls apparently want is sex on this show). Sometimes, it feels like True Detective is just trying to fill space; unfortunately, it feels like this every time the show tries to get personal, with Frank detailing how his life fell apart with a scowl, or Paul’s mother screaming to him about how she knew about “the boys,” again alluding to a simple fact that it seems True Detective is afraid to say out loud, having hinted at it in every single way except saying the actual three-letter word it’s referring to.

All of these details – dead Det. Dixon was hunting blue diamonds on the low! Bezzerides is becoming an alcoholic! The rapist Velcoro killed wasn’t his rapist! There’s a torture cabin full of evidence for some odd reason! – pile on each other until it all becomes a blur of continuous exposition, shoved in between scenes of characters being frustrated at the lack of expediency in their life. Velcoro makes a tape for his son again at one point, and talks about how “pain is inexhaustable; it’s only people that get exhausted.” Well, count me exhausted on True Detective‘s brand of superficial storytelling and pathetic attempts to inject emotional pathos into those stories; “Other Lives” may hit the F5 button on the show’s timeline, but there’s nothing refreshing about what’s happening post-shootout on True Detective, all of which seems headed down a silly, psycho-sexual path in its final few hours.