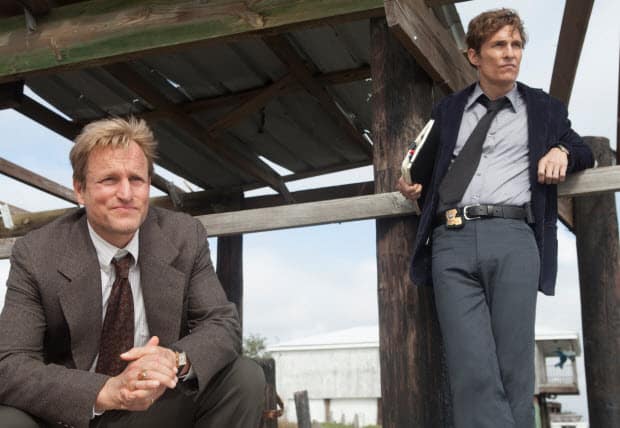 The plot of HBO’s new crime drama True Detective isn’t an unfamiliar one, a story of ritualistic murders of white working girls in rural Louisiana – and more importantly, the two detectives investigating them, Rust Cohle (Matthew McConaughey) and Marty Hart (Woody Harrelson), who slowly become unraveled as the case continues. In those terms, “The Long Bright Dark” is a pretty predictable first hour: a body is found, something connects it to a long-lost case, and two new partners struggle to work together.

Rather, it’s everything outside of the plot that makes True Detective such an interesting watch: the characters (and lead performances), the intellectual touches, and the anthology’s narrative construction chief among them. True Detective tells a story in two directions, using separate interviews with Cohle and Hart in 2012 as an avenue to detail their discovery of Dora Lange’s body on January 3rd, 1995 (more on that date in a minute), and slowly explore the changes to these two characters in the 17 years since.

The framing device alone adds an extra level of intrigue to the show, and one it needs: True Detective might be telling a crime story about a Louisiana serial killer, but it’s more about the characters and showing just how dynamically these men have changed from 1995 to 2012. The case may be solved or not, but we mostly know what to expect here: the more they investigate, the darker things are going to get. These are givens, thanks to director Cary Fukunaga’s stripped color palette and the worn look on Cohle and Hart’s faces in 2012: but detailing the mental and spiritual changes of these two men experience over the course of twenty years is where the show’s real mystery comes from, an exploration into what happens to humans when they’re faced with entities and evils they can’t comprehend.

Most of this headier material is contained to random spouts of dialogue from Cohle throughout the first hour — but the most interesting of them all comes from what’s alluded to, rather than outlined in the script. Take the number three, for example: it’s importance is revealed early in the pilot, when Cohle talks about how the Lange case was his third case after three months on the job with Hart, occurring on January 3rd, 1995 (his dead daughter’s birthday). Later, Cohle and Hart discover “devil’s traps” around Lange’s body and at the house of a long-missing girl: essentially a triangle of sticks designed to capture the devil before he can take one’s spirit or enter their body.

Three months, three cases, three sides to a triangle… why the number three? Pythagoras always considered three the “noblest” number (an allusion to this happens when the detective’s visit Dora’s ex-husband, who tells them she was babbling about being with “a king”), highlighting the battle between good and evil taking place in Erath, Louisiana. But these three entities (Cohle, Hart, and the killer) are also the three sides to the triangle, a Holy Trinity of men trying to catch their metaphysical “devils” before their souls are corrupted.

Taking the Biblical reference a step further, True Detective‘s narrow focus on three characters (one unseen, referenced only in allusion when Cohle asks Hart if he believes in ghosts) allows it to further define their roles in this existential battle — and more importantly, blurs the lines between all three. Cohle serves the role of prophet, the show’s occasionally melodramatic avenue into enlightenment: he says he “smells” the serial killer coming, and disgruntles his new partner when he tells him what a tragic mistake the evolution of human consciousness was. Hart is our ‘priest’, a man whose faith remains undeterred in the face of horrible realities — with our murderer serving as the Holy Ghost, the spiritual guide for Cohle and Hart through the twisted, murky moralities of men and the evils of the modern world, the real ‘devils’ True Detective is interested in examining.

The narrative construction of its main characters is what makes the morality play of True Detective fascinating in the same way Hannibal’s first season was: the metaphysical relationship between good and evil shows up in every corner of both shows, as good men struggle with the horrors of evil in the physical world — and further, the evil threatening to consume them from within (like Hart’s alluded infidelity and Cohle’s intelligence/alcoholism/substance abuse/social awkwardness). And like Hannibal, True Detective uses a very distinct visual palette to visualize this, contrasting the lightest and darkest colors with a palette of grays, giving the show the “fading memory” look Cohle attributes the town. Memories fade, people change, and as time carries on, distinct lines once drawn in the sand seem much more clouded and crooked than one might imagine: as the two characters reflect on events they’ve tried to forget, Fukunaga’s visuals capture how muddled those images (and lessons) are going to be.

There’s no denying the visual and intellectual appeal of True Detective: and the two great lead performances give even further depth to the most interesting scenes in “The Long Bright Dark” (highlighted by any time the two are in the car, where “silent reflection” quickly becomes optional). But I’m not quite ready to garnish the show with the gaudy adjectives seen across the Web this week: there are places where True Detective’s verbosity and literalism works against itself, turning some scenes into entertaining, pedantic acting showcases (for McConaughey in particular, though his character also gets to introduce some of the most fascinating Big Ideas in the first three episodes). There’s also a noticeable lack of interesting female characters, with the two women in Hart’s life playing out the predictable roles of unhappy wife and mistress — for all the praise being heaped on the show for its unique, modernized take on crime noir, True Detective is openly traditional with the show’s gender roles.

However, the pros outweigh the cons, at least in the early going — and “The Long Bright Dark” is only the prologue to what could be a very satisfying conclusion, as the lines drawn between 1995, 2002, and 2012 are revealed in all their (probably quite bleak) glory. True Detective is not a show about two men solved a murder, it’s about the grim nature of the human condition, the ever-continuing battle between man and the evil within himself. An interesting story, yes — but not one we haven’t heard before, and True Detective will need more than a couple great performances and some clever symbolism in the back half of it’s first season to become the darker companion to say, something as contemplative and illuminating as Rectify.

–        Hart explains to Cohle that attaching assumption to evidence leads to prejudice of narrative: in a way, it establishes Hart as a bit of a hypocrite. Assuming the hand of God is involved in one’s life can be interpreted by some (the more “pessimistic” types like Cohle) an assumption attached to physical evidence (i.e., something one might call a “miracle”, or “part of God’s plan”), which leads to the bending of narrative to fit one’s perspective or assumed belief. I feel like Cohle is written as the show’s true voice, and this is the greatest example of its religious nihilism.

–        A girl chased through a field a month before Dora’s death describes the man as a “green eyed spaghetti monster”.

–        Clark Peters (Treme, The Wire) makes a short cameo as a local priest who filed an unanswered complaint about dead cats (turned inside out) nailed to his front door.

–        419 is the police code for a dead human body. If you really want to take the presence of the number three to another level, just look at that number; 4-1 is three, which multipled by itself is 9 (a reference to Dante’s nine circles of Hell?).