I may not be a pretty blonde teenage girl and she may not be a ghost-faced killer hellbent on my demise (…that I know of), but I’m beginning to think that Bankable Productions has been keeping an eye on me since I began covering Top Model in cycle 16. How else do you explain yet another facet of an article I wrote about the show ending up making it…onto the show? First, that horrible, horrible villain toyed with me, eliminating contestant after contestant that I either loved or thought had the competition on lock (right after I wrote about them!) to let me know that she was coming for me. Now that I’ve spent a good three cycles cowering in the corner, fearing for my life (and the possibility of an ice-blonde makeover in my future), it looks like she’s trying to win back my trust through flattery and inclusion of an idea I had to improve the show back in cycle 16. Y’know, before the actively, tauntingly awful all-star cycle and the current cycle, which has shown improvement but not quite climbed into the “legitimate good TV” arena yet.

What idea has Tyra lifted from me now? Why, the idea to have the go-sees, like, mean something. Specifically, I suggested that one of Top Models annual traditions, the international go-sees, should have greater value attached to them to reflect the real world of modeling. On last night’s episode, they did just that, with both a monetary value (1000 HKD) and a job (face of “Nude is Rude” campaign for one year) attached. These girls are going to have to go out into the real world and book work, so an episode like this, with real life incentives and networking, felt like the type of preparation they should be getting from day one. Go-sees typically produce one of the strongest Top Model episodes in their respective season and “Jez Smith” continued that trend, putting the focus all on the modeling and the actual jobs themselves. I initially had a poor reaction to the guides, considering the fact that they wouldn’t have one in real life, but in terms of competition and TV, it evened things up. No girl was in danger of getting lost or not making it to every show and it took the episode up a notch as a result. I mentioned earlier in the cycle that Top Model can be a capital-R Reality show a lot of the time, putting the emphasis on stuff other than the actual modeling, but the introduction of the guides, reminiscent of cycle 2, was a nice move to pull back.

And waiting until the top three to pull out go-sees gave the episode a little more focus. Granted, I like the cuckoo six-girls-for-their-lives go-sees of past cycles, but with only three remaining, you got more of a feel for each visit and how each girl was doing. The lower the number of girls on Top Model, the more they should be focusing on this type of stuff, exposing elements of the fashion scene that we don’t get to see often and that the girls will be dealing with soon.

I wasn’t doing backflips over the photo shoot, though. I mean, it wasn’t anywhere close to being bad, but it just didn’t produce any truly exciting photos. The better Top Model episodes in cycle 18 have put the focus 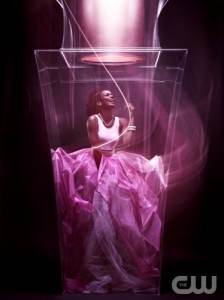 on shape and movement, so confining three talented girls in a box with a poofy skirt didn’t allow for any type of dynamic moments to occur. I did like the fact that it was an actual ad campaign for something tangible and that they had the client at the shoot, but it’s top three and it’s time to go out with a bang. Top two is reserved for Cover Girl and fashion shows and having the final photos be overly photoshopped, stiff perfume ads felt a little underwhelming. I don’t need them to break out a ridiculous shoot just ’cause or anything; I just needed to feel the excitement of final three and the culmination of everything they’ve absorbed in the competition to be allowed to run free. The shoot, seemingly made for Sophie in its doe-eyed foo-foo-ness, did make Laura have to pull another trick out of her bag, which was good and bad. Laura’s very, very comfortable pulling the vampy, edgy card and doing a 3/4 back bend in order to hand it to you, but it’s felt like she’s went to that well a few too many times. Having to rein in all the sexy, something I do on a daily basis, made her come up with something else, likely the reason she was saved. Had it been another challenge that let her move around and work her body, I’m not sure she would have had enough usable, different enough frames to move forward in the competition.

However, the elimination of Annaliese was pretty telegraphed. If you’re going to take the time and effort to make the entire cycle about Britain v. America, even if the themed photo shoots petered out around halfway through, the final two is going to be one Brit and one American. Once Eboni and Alisha got the hell out of dodge, by force or by choice, it became clear that Laura would represent Team Amurrica in the finale and there’s no way in the world they would have eliminated Sophie over Annaliese. At all. That kind of sucked a little drama out of the episode, making panel and all the hand wringing done by the judges pretty irrelevant. Personally, I think that while Laura might have higher highs in her portfolio, her tepid runway walk and one-note performance in the shoots should have gotten her the boot. There is definitely talent there and I think she could be very good one day, but her personality is abrasive, her walk is insecure, and she doesn’t inspire. She’s willing to be pretty-ugly and try weird stuff, a true asset to a model, but it feels like a lot of the praise that she gets is due to potential more than performance. Laura looks like a model and the judges are going to eat that up, excusing behaviors in her that they’ve critiqued in others.

Top Model had one of the better episodes of cycle 18 in “Jez Smith”. It treated them like adults, immersing them deeper in the fashion world through a paid challenge and client-assisted photo shoot. Rather than put all its eggs in the WACKY ANTICS!!!!!!!!!! basket, it actually, like, put on a pretty respectable modeling show. And you can’t be mad at Top Model sobering up, putting on a fresh pair of panties, and turning on its professional side. While I don’t agree with the elimination, I do think that this final two has been pretty inevitable since Kyle and AzMarie got their walking papers and really, what can you do? I would offer a suggestion to that (seemingly) rhetorical question, but I’m afraid Tyra might hear me.

This smize is coming from inside the house…?

Thoughts, Quotes, & Observations:
-“Money is a great incentive for me.”
-“You’ve gotta shimmy with me.”
-Final Call Out Order: Sophie, Laura, Annaliese (eliminated)
-I find it interesting that the week Tyra posted an essay about Vogue banning anorexic-looking models from its pages a girl that didn’t “look like a model” went home.
-Was it just me, or did Annaliese’s costume at Gregory Derham read a little…racially-based? Bananas? Really?
-Laura looked horrific at panel. The scarecrow hair, the black onesie – that’s less quirky Top Model, more homeless lady down the street.
-From my notes: “WIND MACHINE YES MA’AM”. If at all possible, I’d review the cycle 18 finale with a wind machine blowing my hair every which way. Make it happen, TVOvermind.
-Next week on Top Model: It’s the increasingly superfluous highlights show, followed by a finale that included Gaga-style hair bows and Laura physically breaking down.