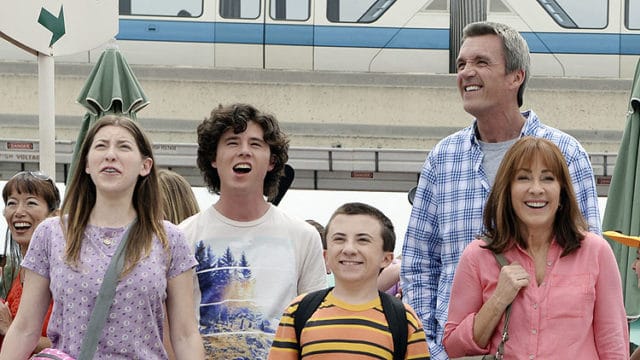 ABC’s family centered comedy “The Middle” will end after its final and ninth season this Fall.The sitcom premiered in the Fall of 2009 and introduced us to a different type of family centric sitcom. This is not just a show about a mom and dad and their children muddling through suburban life. “The Middle” takes a unique take on life of a middle class family struggling through the drama of their life. The Heck family have shown us laughter and love while tackling everyday problems more realistically than most family comedies. Written by “Rosanne” writers Eileen Heisler and DeAnn Heline and starring Patricia Heaton and Neil Flynn, “The Middle” has remained in touch with reality while providing comedy. Often flying under the radar, “The Middle” remains one of the best family sitcoms.

Here are 5 of the best moments from “The Middle”.

Frankie (Patricia Heaton) is the often stressed mom on “The Middle” who tries to hold her family together while holding the family’s finances together. She just wants the best for her family but is honest about her struggles. Early on in the series, the family encounters a tornado and must take shelter in the basement. Frankie unleashes her own tornado on the family by telling them just how difficult it is to provide for the family. The series takes a difficult yet common middle class problem and adds humor as Frankie shocks her family with the truth. Patricia Heaton’s comic delivery of the facts is spot on.

Geeky Sue Keck (Eden Sher) has her share of great moments on “The Middle”. The plucky teenage daughter of Frankie andMike never gives up on her dreams and always manages to get the results she wants. When she forms a cheerleading squad for her high school wrestling team it seems as if Sue has sunk to her lowest, but she actually makes the squad endearing. When the band of geeky cheerleaders perform for their school, they outshine the basketball cheerleaders.

While “The Middle” supplies us with weekly humor, it does so while providing what matters most in a family, love. Most sitcom dads have little interest in their children’s social lives, but Mike steps up to the plate for his kids. The episode where Sue is not invited to a slumber party yet the hostess asks her to borrow a sleeping beg gives Mike the opportunity to be a great parent. His confrontation with the hostess’ dad and ultimate altercation with the sleeping bag shows just how in touch Mike is with his children’s problems. Mike proves that he is a great dad.

The Heck kids deal with bullies at school, but the entire family has to deal with bullies in the neighborhood. When Brooke Shields guest starred as Rita Glossner, the mullet wearing scary mom with the out of control kids living up the street, she provided some of the best “The Middle” moments. Shields is hysterical as the redneck neighbor who traumatizes the Heck family. The Heck family, as always, holds their own.

As with almost all siblings, the Heck kids rarely get along. They have a very real relationship that isn’t often reflected in family sitcoms. Axl (Charlie McDermott), Sue (Eden Sher) and Brick (Atticus Shaffer) play more realistic siblings. Although they argue, the Heck children share some of their best moments when they actually bond. The finale of the fifth season shows the siblings reluctantly but ultimately bonding because they do really love each other.