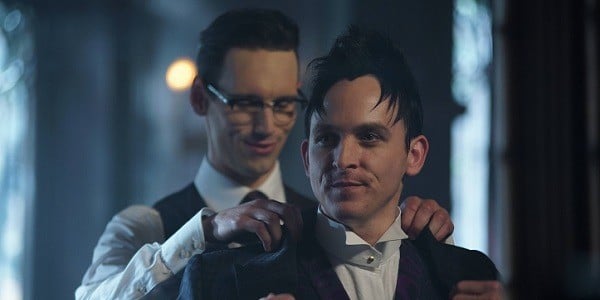 Fan theories are nothing new. In 1980 fans obsessed about “Who Shot JR?” on Dallas but without the internet, fan theories were confined to articles in TV Guide and water cooler debates. Now with Twitter, Facebook and a plethora of fan fiction sites, fan theories are only confined to the fancy of the viewer’s imaginations. Still, some fan theories hold more water than others. To be worthy of generating some juicy fan theory, a show must have enough twists and turns to keep viewers guessing. One show that is lighting up the internet is Gotham, an imaginative and dark prequel series set in the Batman universe of Gotham City. As some theories hold more water than others, here are the top five Gotham fan theories that are out there right now.

5. Jerome Valeska is The Joker

Fan theory enthusiasts thought they had it nailed when we met Jerome Valeska. The actor, Cameron Monaghan nailed the performance channeling just enough Jack Nicholson and Heath Ledger into his act to make fans surmise “This is it, he’s here!” Then the curveball came when Jerome was killed and fans were left confused and pretty upset. Then the “freak van” from Arkham rolled up in the Season 2 Finale and viewers swore they caught a glimpse of Jerome and the speculation ramped up again. and it turns out they were right, Jerome in some form is alive, although he’s having some trouble lately keeping his face on. Jerome has bright hair, pale skin a knife sliced smile, he wears creepy makeup, and was raised in a carnival. Plus he just loves to laugh. Who else can he be?

4. The Waynes Were Gangstas

In Gotham, the Wayne family gets more air time than in the traditional Batman universe. They had ties to all sorts of goings on in Gotham. Ed Nygma seems obsessed with asking “Who Runs Wayne Enterprises?” Then there’s the Court of Owls stuff too, and the fact that the Wayne’s have a bank account that would impress Scrooge Mc Duck. This is true in the regular Batman universe too but in a crooked town like Gotham, how many pies have the Wayne thumbprint? Was Bruce’s parents’ murder a mob hit?

Well, the name is the same but is it really the same girl? The rapid aging plotline begs a few questions. Is this new Ivy a plant (no pun intended). The younger girl seemed nicer and a lot less vapid. Did the chemical soup that changed her age also give her a personality transplant?

2. Jim Gordon Is Not Done With Barbara

This is a plausible theory as in the Batman universe, they get married and have at least one child, who becomes Batgirl. The romantic chemistry sizzles between the characters on Gotham, so don’t dock their ship just yet. Jim can’t seem to make it work with anyone else no matter how hard he tries.

It’s pretty clear that Ed Nygma is the Riddler and Oswald Cobblepot is Penguin, but Oswald’s crush on Ed was an unexpected surprise! Will those feelings ever be returned? Does this couple have a chance, even though Ed shot Penguin and left him for dead? Some say yeah, their time will come. Their heated exchanges and love for diabolical plots make them a perfect match. Considering the number of steamy fan fiction stories that feature the mayor and his right-hand man, it’s clear that the viewers really, really want this pairing to happen.