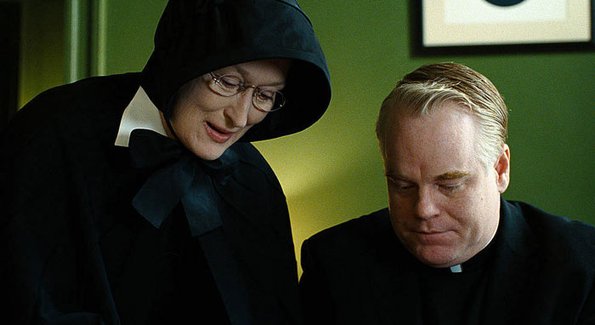 With such a mixed response concerning priests and their role in religion nowadays it’s kind of difficult to really pin down one set of feelings or another. When they appear in film however they’re almost always the good or the bad guy depending upon the story line and how their character arc is supposed to go. You can feel whatever way you want to about priests, but normally their role in the church is to be the guide, the authority, and the upright individual that is supposed to shepherd the flock so to speak. However a person might feel about them, the role is in fact supposed to be quite positive.

The kind of suspicion inherent in this film is not just unfortunate due to the content, it is unfortunate because trauma undetected and unresolved over time can cause people to mistrust those around them that might seek to do good. There is a great deal of doubt in this film, though it does not simply stem from the issue that is presented with Father Flynn and Donald. It also stems from Sister Aloysius’ own convictions that seem born of the type of paranoia that causes people to suspect others during every waking moment of the day. There is no truly right person in this scenario, but there is plenty of wrong.

It’s a bit sad to see a preacher or priest that no longer believes. It is the sight of an amputated spirit that is far worse than any injury could ever be. Pain and grief tend to damage the relationship between God and His children at time, particularly when random acts occur that seem to have no place in our lives. Graham is one of those that refuses to see the signs any longer in life that the divine is in fact working to better the world. Eventually however he opens himself up once again to realize that what might have seemed like random quirks do in fact have a purpose.

This is perhaps one of the most fun examples of the priesthood in films. Tuck is quirky, he’s a bit slovenly, and he definitely enjoys a good cup of spirits now and again, and again. This makes him far more endearing to the band of misfits that call Sherwood forest home, well that and the fact that while he is a holy man he is still far more accepting than those that practice within the actual church.

It seems odd to think of a priest as a scientist at times but it is actually quite common. Science and religion have been working side by side for longer than many people care to think about, but the practice seems to be in danger as the years roll on. Faith is wonderful and unites people on many levels, but blind faith tends to do more harm than good at times, particularly when one is asked to have faith in a church that would gladly sacrifice all reason to hold onto a fading precept that faith is not enough without strict religious practices.

He has such a small, simple role but in truth Father Carmine is perhaps one of the most memorable characters in the films. His presence is felt mostly when Rocky seems to need  that few seconds worth of guidance and the occasional blessing, but he never fails to deliver. Even when Rocky comes to his home in the middle of the night and wakes him up Father Carmine is there and ready to talk. Granted, he usually wants to know what Rocky is doing there, but he always comes through.

Priests in film are usually the good guys that mean well and want to see things done the right way. They can be bad guys, but those are usually the ones that are painfully obvious and less than friendly. If only the distinction was that easy in real life.