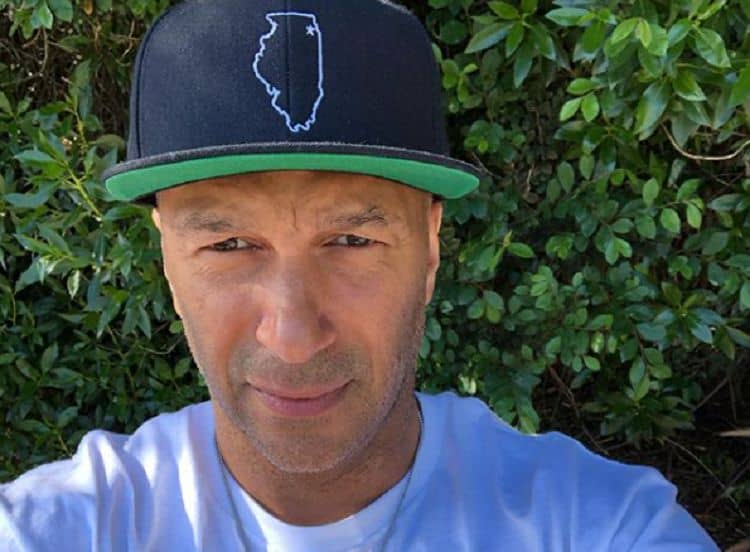 Tom Morello is an American musician who is best known for being part of the bands Rage Against The Machine and Audioslave. He is also known for not being afraid to share his political views. Here are ten things about him that you may not know.

1. His Father Was The First Kenyan Ambassador To The United Nations

He is the son of Ngethe Njoroge and Mary Morello. His parents met in Kenya and when she discovered she was pregnant they moved to New York City where they were married. Njoroge was the first Kenyan ambassador to the United Nations. He returned to Kenya when his son was just over a year old, denying that he was his father. Morello was raised by his mother in Illinois and took her maiden name.

When he was around thirteen years old he joined a band called Nebula. He was the lead singer in the band as at this time he did not play guitar. Nebula were a covers band and they performed songs by bands such as Steve Miller Band and Led Zeppelin. He also performed in the choir when he was in high school and was also involved in acting, including playing the part of Oberon in A Midsummer Night’s Dream. He only started really getting interested in playing the guitar when he was at university.

He graduated from high school with honors and enrolled in a political sciences course at Harvard the same year. He received a scholarship that enabled him to attend the university as there was no way that he would be able to afford to go otherwise. His love for music continued while he studied here and he was a member of a band, this time as the guitarist. He graduated with a Bachelor of Arts degree in social sciences.

4. One Of His Former Jobs Was As An Exotic Dancer

After he graduated from Harvard he decided to move to LA. In the first few months after he moved there he found it difficult to make ends meet. According to Chart Attack, this led to him taking on a job as a stripper. He was most often booked for bachelorette parties and used to strip down as far as his boxing shorts. He has joked that he was glad there was no such thing as YouTube in those days.

5. He Briefly Worked In Politics

After he had been living in LA for around a year he got a job as secretary to Senator Alan Cranston. This job taught him that although he was very interested in politics, he would never be able to make a career from it. He has said that the job opened his eyes to just how much time is spent by Senators trying to secure donations from rich people. He also got in trouble for telling someone that she was racist when she wanted to complain to the Senator about a Mexican family moving in nearby. He realized that he could not spend all of his days going against his principles in this way.

6. He Performs Folk Songs Using The Name The Nightwatchman

He is best known for his involvement in rock music, but he also performs as a folk artist. He uses the alias The Nightwatchman but this is not an attempt to hide who he really is, it just separates the music from the rock genre. He has said that he sees his folk music as something of an extension of his politics. Some of his early performances as The Nightwatchman took place at open mic nights and people who recognize him always seem surprised that he is not playing an electric guitar.

Rolling Stone magazine placed him at number 40 in their list of the 100 Greatest Guitarists. The magazine cited his unique playing style as one of the reasons why he was chosen for the list. He makes full use of his effects pedal and the techniques that he uses sometimes gives his music a hip-hop feel. He is very technically gifted and can make sounds from his guitar that other people can’t. He placed higher in this list than other notable guitarists such as Mark Knopfler and Slash.

8. He Is A Board Member Of The Traverse City Music Festival

The Traverse City Music Festival takes place in the city of Traverse in Michigan every July. It was founded by the director Michael Moore, who Morello has worked with on several occasions. The festival aims to show great movies that are generally overlooked for mainstream distribution. It features a lot of movies that are made by independent film makers and the festival gives them a chance to showcase their work that they may not otherwise get. The festival also features a variety of musicians that are all based in Michigan.

9. He Has Written A Comic Book Series Called Orchid

Away from music he has also been involved in writing. He wrote a 12 book comic series called Orchid which is set in a post apocalyptic world. He wrote exclusive songs that were released alongside each of the editions of the comic. Dark Horse sponsored the release party for the comic which was held at Jetpack Comics in Rochester, New Hampshire. The Canadian artist Scott Hepburn illustrated the comics and bought Morello’s ideas to life.

10. He Is The Co-Founder Of Axis Of Justice

He founded Axis Of Justice with Serj Tankian from System of a Down. On their website they explain that the mission of the organization is to promote social justice. Some of the issues that the group has worked for include the abolition of the death penalty and more rights for immigrant workers. In 2006 he was awarded the Eleanor Roosevelt Human Rights Award for his work with Axis Of Justice and his support of worker’s rights.