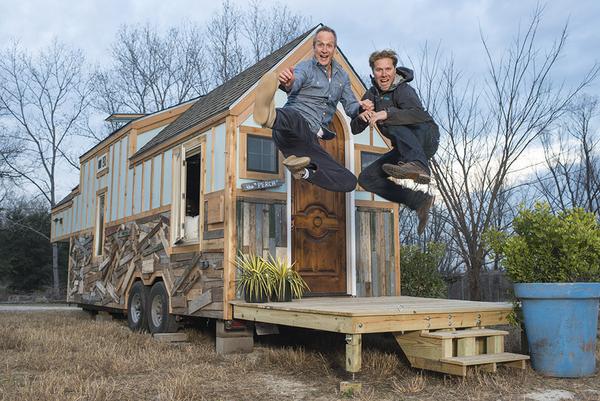 Obviously Tiny House Nation is just what it sounds like, tiny homes that are 500 square feet or smaller. Some might wonder just how anyone could possibly live in these homes but the show did manage to go into why they became popular and why many of the people that have come to value such homes have managed to form their own communities in a way. A lot of people look at these and feel their eyes widen as the implications of them start to take hold very quickly. They’re not exactly family-friendly and they’re not even that great for people that need a lot of space, but in truth they are a great idea for those that are into minimalist living and don’t seem to need much. “To each their own” seems to be the big feeling of this show and despite what anyone thinks this is possible.

Here are a few things you didn’t know about the show.

10. Zach rarely had any tools in his tool belt.

This doesn’t say a lot for someone that’s supposed to know what he’s doing other than the fact that he wants to look like he knows what he’s doing. Yeah, read that again, because that seems to be the wool that’s being pulled over your eyes just a bit. If he does know what he’s doing that’s great, if not then it’s kind of an oddity for a show like this.

9. One of the contractors sued two of the clients.

Apparently conflict came in the form of two clients deciding to blast a contractor after they noticed some shoddy work that had been done and wasn’t being replaced. Unfortunately the contractor made it known that his job was done perfectly and that the couple were attempting to do their own upgrades and made their own mess before trying to ruin his reputation.

8. Tiny homes are not realistic for a growing family.

This should be pretty apparent from the show and from the few people that have been on the show that these tiny homes aren’t that great for a growing family. While they’re great for the purpose of an individual or a couple they don’t work that well when raising a family.

Take a look at the show and you’ll see mostly fit, thin people, not too many that are extremely tall or all that bulky. While the tiny home are great for people that are in good shape and slight of build they can be a little confining for someone that stands over six feet and has a bulky frame.

Any more than this and it can get unbearably crowded. Take a look at the show and you’ll see singles and couples buying into them, you won’t typically see families moving into tiny homes since the places can’t support that many.

5. This was more of a trend that has gripped quite a few people.

It’s great that people who don’t need a lot of space or anything else have found this trend since it cuts down on cost and maintenance to be honest. A traditional home comes with a lot of responsibility for one person.

4. Tiny home owners have created their own community.

Those that have managed to find each other and share an interest in tiny homes are another community unto themselves since while some of them are stationary a lot of them can be picked up and moved about quite easily.

3. For those that don’t need or want a lot tiny homes are perfect.

A big home has a lot of maintenance and upkeep to it that can be kind of overwhelming for a single person that needs to work, have a life, and do other things as well. A tiny home eliminates a lot of that.

2. The show was cancelled.

There was a rumor that the show was cancelled but it’s not for certain if you look at the internet, which is unreliable in some ways since anyone can post anything. But given that this is still a viable trend it wouldn’t make a lot of sense.

1. Tiny homes aren’t much use for those that want to have their own space.

When you look at these homes they’re pretty impressive since they include a lot on the inside without taking up too much space, but then you hear and see how close everything is and it might actually make some people claustrophobic. The argument of being able to go outside any time you want is kind of invalid since the whole idea of having a home is having your own space that you can enjoy. For those that enjoy tight spaces it might be fine, but for others it might be a bit confining.

It’s definitely one of those shows that you have to be interested in to watch, but many people have found their way to the FYI channel.