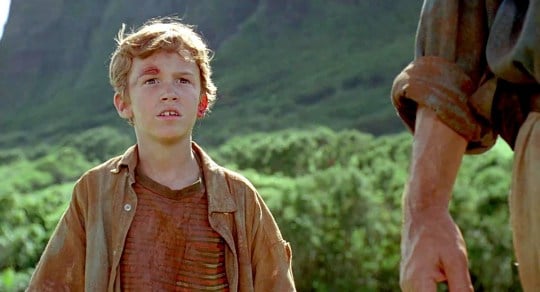 Chris Pratt kind of lucked out when it came to starring in movies that were building to a massive crescendo, but his comments as of late have people wondering just whether or not we’re going to see some familiar old faces in the upcoming Jurassic World 3, among them being Joe Mazzello. Rebecca Vanacker of Screenrant is continuing this tease as Mazzello has even made a comment that he might actually be coming back. You might remember Joe best as Timmy, the kid that just wouldn’t leave Dr. Grant alone and just had to spout every bit of dinosaur knowledge he had at any given time, at least until he came up close and personal with a few of them. Poor Timmy was kind of the punching bag when it came to Jurassic Park since when you look at it he got threatened by T.Rex along with his sister, then tossed off of a ledge while still inside one of the vehicles, into a tree no less, then he vomited on himself. From that point he was rescued by Dr. Grant, who saved his life once again when he was electrocuted after failing to let go of an electric fence in time. Then came the real test of courage as he and his sister Lex had to outrun and outwit a pair of velociraptors in the kitchen before joining up with Dr.’s Grant and Sattler again just in time to be menaced by the same velociraptors and then miraculously saved by a the same T.Rex that tried to kill him and Lex in the first place. So yeah, Tim definitely got the short end of the stick when it came to his overall experience of the park.

Believe it or not, Joe was ten years old when he starred in the first Jurassic Park, and since then he’s still been working just like the others, appearing in various movies and even directing and producing as he’s made his way through the show business ranks. It is kind of exciting to think that if he showed up it might be interesting to see Ariana Richards come back as well, though it would also be great to see Julianne Moore, possibly Vince Vaughn, and even Vanessa Lee Chester.  Remember her? She played Malcolm’s daughter in the second movie, The Lost World. If there’s a fight to either preserve human life or dinosaur rights, as appears to be the case, it would make sense for those that have had something to do with them in the past movies to show up at least for a cameo. Richard Attenborough won’t be there unfortunately as he passed away in 2014, though his legacy can certainly be preserved, and has been, by making mention of him more than once throughout the movies. B.D. Wong absolutely has to show up since his science and his tampering with the dinosaurs has made them what they are, while Jeff Goldblum, Sam Neill, and Laura Dern sound like locks already. Chris Pratt’s words were that they were ‘bringing everyone’ into the final movie, and as the last movie in the Jurassic Park franchise for now it would be great to see everyone that could possibly be brought in, especially since if this is the finale then it needs to pay some credit to everyone that’s been up close and personal with the creatures.

It would be interesting as well to see how the characters have developed and how really eager they would be to interact with the dinosaurs again, since if anyone can remember it was pretty clear that Timmy and Lex were done with the idea of dinosaurs by the time they got on the chopper and were safely away. Even Malcolm wanted nothing else to do with the matter since he didn’t want to go back in the second movie. But to bring them all back, that would be a fitting finale since it might actually fit them all into a team where the guy that played Star Lord might be willing to listen for once instead of going by his own plan of attack. After all Owen Grady and Peter Quill are two very different people when it comes to temperament and attitude, so maybe he’ll be recruiting Dr. Grant and Dr. Sattler for this endeavor, or maybe they’ll somehow meet at some point in the movie, it’s hard to say. But as far as Timmy and Lex are concerned it might be that the memories of what happened so long is what gets them into the story, or maybe they’ve taken a path that leads them to the same line of work as Grant and Sattler. Who knows? There are a lot of possibilities at this point and not enough solid facts to go on just yet. Once there are then we’ll be talking about the lot of them for days before the movie is released.