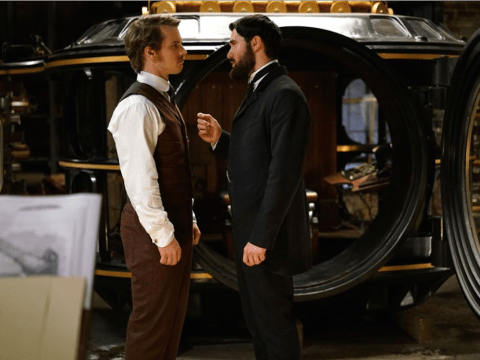 Time travel is all the rage this year. ABC’s newest drama Time After Time continues that trend. The show takes the task of time travel and places it on the very man who first wrote about it. H.G. Wells himself lands in the 21st century chasing not his grandeur dreams of the future, but the most notorious serial killer ever known. To complete his mission, Wells is aided by a few modern day allies to help him navigate this foreign land. Though it’s not just Jack the Ripper Wells must be wary of. There are too many unknown variables to both of their futures, which is where we find the duo at the end of the 2-hour series premiere.

The series opens in 19th century England, where H.G. Wells is a well-respected scientist but has only started to write about time travel. What he has done is actually build a time travel machine he believes will work. The only other person who believes that Wells’s machine works is his friend, Dr. John Stevenson, aka Jack the Ripper. When the authorities close in, Jack uses Wells’s time machine to escape to 2017, and Wells follows.

Here’s where idealism and reality crash brilliantly. H.G. is simultaneously amazed and devastated by the 21st century. Technology has advanced more than he could have imagined, but the world is far from the utopia he predicted. It’s so far from utopia that it’s the perfect playground for Jack the Ripper to revel in. John immediately blends into the New York City lifestyle, while H.G. bumbles along with a little help from Jane, the assistant museum curator in charge of the Wells Exhibit where both time travelers land. Once H.G. proves who he is to Jane, they try to get John back to the time machine so he can be brought to justice in the right century, especially since he’s already started his 21st century killing spree. Instead John kidnaps Jane to wrangle the time machine key from H.G. so that Jack the Ripper’s legacy can flourish in any century he so chooses.

H.G. doesn’t have time to rescue Jane before his great-great granddaughter! Vanessa, the woman responsible for finding the time machine and lending it to the museum, introduces herself as Wells’s descendant. She doesn’t understand how that is geneologically possible, but trusts it is true. Because she is rather wealthy, she does everything she can to help her great-great-grandfather find John. This in turn assures H.G.’s trust in Vanessa, even when her good intentions scare John away before he can tell H.G. where Jane is.

In the meantime Jane finds John’s weakness while distracting him from killing the girl whose apartment he has taken over. John is thrilled that he is so famous, but less so that he is anonymous. It’s his hubris. He’s not content knowing the world doesn’t fear him as a man. If everything he’s done up to this point isn’t terrifying, brutally slashing up the girl is. Or at least that’s what he makes Jane think. It seems her speech about his anonymity got to him. It’s more important to him to make a name for himself than to focus on one specific killing. In order to save Jane, H.G. gives John the key to the time machine, but must break it in order to stop his enemy from going anywhere else.

For now at least H.G. Wells and Jack the Ripper are stuck in the 21st century. Neither one of them necessarily thinks it’s a bad thing. H.G. has to opportunity to get to know his great-great-granddaughter as well as Jane a little better while he fixes the time machine. John can, unfortunately, hide his murderous intentions in plain sight. That doesn’t mean he doesn’t want to be famous. He promises to kill one person everyday until H.G. fixes the machine, so expect a lot of bodies ahead. Little does Jack the Ripper know that the hunter is being hunted. A third party is following not only H.G., but John as well. My money is on someone working for Vanessa’s politician boyfriend, because what other random person would know enough about H.G. and John to track them to this point?

The re-imagining of H.G. Wells and Jack the Ripper’s story is filled with charm, intrigue, and some pretty weighty killer performances from Josh Bowman. Will you continue to tune in?

Time After Time Season 1 Episode 1 & 2 Review: "Pilot/I Will Catch You"

Time After Time re-imagines the story of H.G. Wells and Jack the Ripper across the centuries.