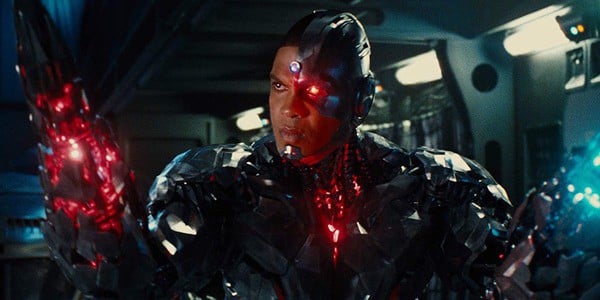 The DC Cinematic Universe still has a plethora of projects that are still in the development stage. Just in case anyone forgot, one of them is the Cyborg movie. Yes, I am talking about the ninety-nine percent CGI character from Justice League. The character made his debut as a cameo in Batman vs. Superman: Dawn of Justice, but became a central character in Justice League. If you remember the old Teen Titans cartoon fro the early 2000’s, that version of Cyborg is what fans wanted to see. That Cyborg was an optimistic, pizza-loving joyride of a character with the famous catchphrase, “Booyah!” coming out of his mouth consistently. Unfortunately, the Cyborg we got in the Justice League movie paled in comparison to that version that we all loved. The DCEU version we got was moody, barely smiled, and spent most of his time hacking things.

Even at the end of the film, his one and only “Booyah!” felt kind of flat. When he said it in the cartoon, it was meant to literally be his war cry. Whether he was fighting bad guys or even kicking butt in video games, that was his line. His delivery of that line in Justice League barely had any enthusiasm behind it, making it feel a bit forced. Let’s once again go over how he was primarily a CGI character, with the exception of the right side of his face. I’ll just say it, because I  seriously think he was a bit too CGI-ish. It honestly looked incomplete and he didn’t look completely real as a result. That was disappointing, especially since most of the film suffered from that issue.

Cyborg was an underwhelming character in Justice League, but despite that, he was confirmed to be getting his own solo film. Ray Fisher was set to return to the role, a release date in April of this year was set, and that was it. Literally, no other details every emerged about the film. No director, no other cast members, no plot details, nothing. Let’s just be straight and ask the big question: is the Cyborg movie still happening? Well, nothing has really been confirmed or denied yet, so the chances of the film seeing the light of day is still up in the air. I really mean way up in the air, so if you want to see more live-action Cyborg, stick to the Doom Patrol show for now.

A Cyborg movie in limbo only means more time for speculation. I always thought the idea of a solo Cyborg movie was strange, but given the right director and vision, anything is possible. That being said, there is some potential to a Cyborg movie and the number of directions it can take. Let’s begin with the other DC characters he is primarily associated with. No, it is not the Justice League, but the Teen Titans. Before he became a member of the Justice League, he was one of the Teen Titans, a group of young and ambitious superheroes.

Unlike most of the other Titans, the young Victor Stone wasn’t a sidekick to a popular superhero. He also didn’t received his powers by choice, as his robotic body was made as a result of a horrific accident. His powers of technopathy were considered by him to be a curse, literally claiming that death would have been the better alternative. He began as a tragic character, but in time, he became more content with his new body and used it for the greater good. It was during this time that Cyborg became more like the cartoon version we fans recognize. He learned to control his powers and he actually became happy.

The ending of Justice League showed Cyborg transforming his body and even accepting it. This would serve as a great set up to his solo movie, because he can be fully committed to learning more about his powers. His arc would be set up, but who would he interact with? The answer is the one and only Teen Titans.

I know, it sounds like I’m basically proposing a Teen Titans movie. Well, that’s because I pretty much am, and that’s because it would be exciting. If we’re talking about specific members, all you have to do is look back at the old cartoon. Cyborg developed a close relationship with his teammates, which included Robin (Dick Grayson), Starfire, Raven, and Beast Boy. The lineup was small, but they proved to be an effective team and became close friends.

This is the kind of dynamic the DCEU really needs. Its most successful movies, like Shazam and Aquaman, had a believable family element to them. Not only did it take away the dark gloominess the DCEU originally thrived on, but it actually worked well. The relationship between the Titans is all about young people learning to work together and become more mature and experienced heroes along the way.

This kind of premise would serve well for Cyborg’s movie. He can spend most of the movie learning to adapt to his body even further while making new friends in the process. An older Batman heavily implies that an older Dick Grayson as Nightwing exist in the DCEU, and he would act as Victor’s greatest ally. The list of heroes doesn’t stop there, as the addition of Starfire, Raven, and Beast Boy would provide for useful supporting characters. Introducing the Teen Titans to the DCEU sounds like a fun idea to me.

Now that that I talked about the heroes, it’s time to talk about the villain. Cyborg has a history dealing with some bad apples, but the baddest of the bunch would be Brother Blood. Sebastian Blood has made appearances in the old cartoon and the CW Arrow show. The comic version has been usually shown as a manipulating cult leader backed by many fanatical followers. He’s a creepy and sadistic villain who has a knack for controlling others. His particular rivalry with Cyborg is shown in the old Teen Titans show. This led to some brutal fight scenes between the two with Brother Blood often dominating them.

Brother Blood would be a different kind of villain to introduce to the DCEU. Not only is he scary, but oddly real as well. A cult leader vs. teenage superheroes? Give it a shot.

There are other supporting characters who can appear in Cyborg’s film, including his father and other Justice Leaguers. I personally care more about making the Teen Titans work and setting them up for the DCEU. It would introduce a new team to the DCEU and expand on Cyborg’s character development, something that’s very needed. If the Cyborg movie is still happening, then this is the best route it can take.