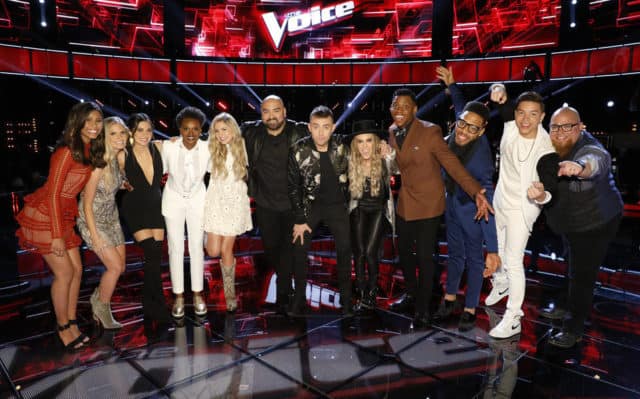 While the The Voice Season 12 Top 12 Performances, were all basically good, I found the overall feel the show a little dull.  When nearly everyone is getting the same notes, cut out the rifts to “sound more emotional,” the result is that all the music starts sounding the same.  It’s like no matter the original genre everyone sounded like they were on a country music station!

Do I blame that on guest mentor Shania Twain? No. The Voice Season 12 has been telling singer after singer to do less rifts since the beginning of the season.  I’m not what producing genius decided that rifts mean disingenuous or less emotional, but that’s their own prejudgment.  For one, there is music where not going there is a real disservice to the song.

However, sometimes it does feel that way.  It happens when someone is trying too hard and thinking too much.   However, there are singers whose life musical experience is such that it’s as natural as breathing.  Making them hold that back is what feels phony because they are trying not to do it.

Coach Adam Levine will forever get props for being the only person who turned for Jesse Larson during the blinds. With this performance it truly is all about his voice. His passion and emotion is in every note – riffs included.  In this performance, yes, Adam, he does at times sound like Ceelo Green. The problem is that he’s nowhere near as interesting to watch on stage as Ceelo.  I might like to have his song looped on my iPod, but I doubt I’d go see him in concert.

Mark Isaiah does boy-band pop really well.  Does he sound like a number of other singers on the radio? Yes.  So, when he came in saying he wanted to showcase more of his r&b side and get more smooth and intimate it sounded like a good idea.

After he sang a bit of “One Song” by Drake and Kyla & Wizkid Adam talked to him about simplifying it and not “embellishing” it so much.  Shania took it a step further.

You’ve got all these words and all these notes – you’re at the risk of making it sound like a run-on sentence.

Did they both forget he was singing Drake?   Anyway, Adam suggested they make the music intimate by dropping out some instrumentation, but then speeding up the tempo!  How did that fit with Shania’s note, not to mention Mark’s wish to essentially show some depth?  It didn’t.  Instead, they turned into yet another Justin Bieber-like number.  He’s cute enough, and moves well enough, to pull this off, but it still felt generic.

This was not the best performance by Stephanie Rice – and it was still one of the best of the night.  The arrangement she did for “White Flag” by Dido was more interesting – and yet similar – to the original.  Both start out quiet and whispery in the beginning before moving into something louder and more dramatic.

Vocally the entire song was fine.  What was off is that Stephanie was overly dramatic during the beginning.  It’s the first time it felt like she was trying to sell a song. Then, like a switch was flipped, she dropped into her emotions and suddenly I could feel what the song meant to her.  She was raw and real – which is what elevates her singing from a good voice to being in the vein of an Emmylou Harris or Brandi Carlile.

First of all, whose staging idea was it to start the song with focusing on the cute blonde shaggy-haired guitar player? Like, why set up that comparison?

The overall feel of this performance was that of a coffee-bar singer.  For one, Troy tended to pitch his voice too low and thus was dropping the ends of words. The result was mumbling.  Still, there was a little of  a John Mayer feel in his approach to singing this Tom Petty classic.  Gwen had made a suggestion to Troy that he should stick to the original melody on the chorus of “Freefall.”  He didn’t do that, and musically it was the probably the one thing in his performance that ended up working.

The only issue with performance by Aliyah Moulden was wardrobe.  She looked adorable in rehearsal – like a Mouseketeer!  Doing up-tempo songs with that fun Motown vibe suits her voice well, but it’s better if they keep her costume like that of a 1950’s teenager to match.   Don’t try to make her pull off a more adult sophisticated look.  It just throws off the performance.