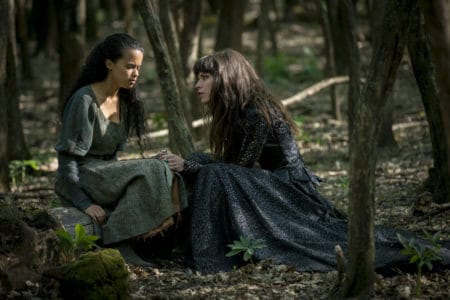 It can be hard for women on television, and as a woman who enjoys TV a lot, seeing the abuse of women in fictional worlds is hard to grapple with. Tonight, on Emerald City, the writers put nearly every female character through a world of pain.

First, Lucas sets out to kill Dorothy under the instruction of Glinda. It’s brutal, and upsetting to watch, especially after they were lovers. I did like that Toto attacked him, that dog doesn’t get enough screen time. Later, a determined Dorothy goes to the Prison of the Abject to release the imprisoned witches. West beat her to it. So, Dorothy does the next best thing and activates the stone giants. Even though Dorothy should be the main character, she is not the most compelling.

Who is compelling? Tip. As always, her storyline has intrigued me. She deals with transgender feelings in this magical world. A woman manipulated her for her entire life to think she was a boy, but she was born a girl. Now, with magic, she returns to being a boy, who she really wants to be.

At first, West resists the change. She calls the transformation “petty,” to which Tip responds, “This isn’t petty; this is me.” I love that the writers are trying to bring an issue relevant to real life into their show, but I don’t like what happens at the end of the episode for Tip.

The witches West recruits do not believe that Tip is the princess, and she has to use a lot of magic to prove it to them. This includes transforming back to a girl. I hope they believe her enough to allow her to return to her true self. Even using pronouns for this show is difficult because I don’t know what Tip will choose in the end.

Next to the mysterious Lady Ev, who tries to form a strong resistance against the Wizard, and fails. Lady Ev has the worst fate out of all the women this week. Not only does the Wizard kill her guards, but he also enters her room and hits her! So very uncalled for, I don’t really understand why the writers put this in at all.

Then, while she tries to give her life up to save her kingdom, Jack tries to be a hero and shoot the Wizard, but misses and shoots her instead. We finally learn why Lady Ev wears her masks: she’s a robot Jane created for the king. It’s a sad truth, but what’s sadder is that it is just fuel for Jack. He’s angry and I’ve never liked it when writers use the death of any character just to push the plot of another. Maybe next week he will find some compassion for her.

“The Villain That’s Become” really missed the mark for me this week. There were some good parts, but the overbearing mistreatment of its female characters was just too much for me.

My favorite line from the episode comes from West, on her reputation: “In certain circles I was known as The Wicked Witch of the West.”