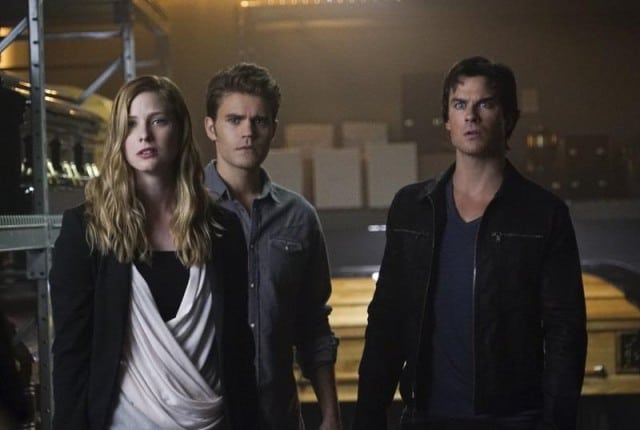 Another week, another mixed review for The Vampire Diaries.  Stefan and Caroline are finally together (and adorable at that) but unfortunately the cracks are starting to show. With Elena physically distanced, Damon tries and fails to turn over a new leaf.  Surprise, surprise.

I blame Lily for the many grievances I have with the show as of late.  If it wasn’t for her, we wouldn’t have these pesky and downright annoying Heretics.  Nor would we have to see a love triangle involving her and Enzo.   Double ugh right there.  Enzo was a good character when first introduced two years ago.  Now he’s long since overstayed his welcome in town and the idea to pair him off with Bonnie seems extremely forced.  These are two characters who only share common friends and (more often) enemies.  Itll take a lot more convincing to get me to accept this new couple in the future.

Lily and her chosen family are at that same point of annoyance with me as Enzo.  I don’t like them nor do I care to try anymore.  The only acceptable alliance to come out of Lily’s resurrecting Julian is the one between Valerie and the Salvatore brothers.  This semi-rules out Val as the main suspect for the mystery vampire hunter in the future but this also comes on the heels of the latest casting announcement of the actual hunter set to make her debut in a later episode.

Back to the present day, the truth of the Phoenix stone is revealed and that’s at least one unexpected twist.  I expected there to be some consequence to resurrecting dead people, but the thought that there’s only very specific and ancient vampire souls trapped into the stone never occurred to me as a possibility.  This all makes sense now and adds some intrigue to the identity of the soul inside of Jo.  If my theory that her babies were also resurrected in the womb, it’s extremely creepy to think those two cute twin daughters Alaric has in the future are actually reincarnated vampire souls.  Ric and Jo haven’t even gotten to the topic of her pregnancy yet since they’re just now finding out it’s not actually Jo!

Stefan and Damon are siding with Valerie now but only because the truths of Lily and Julian’s past are coming to light.  Stefan vows to kill Julian for the pain he caused Valerie, and Damon vows to kill him as revenge for Lily’s hand in Kai’s punishment of Elena.  Lily’s involvement doesn’t surprise me, nor does Damon’s newfound purpose to tease his mother with the satisfaction of regaining her lost love only to tear him away from her.

The flash forwards remain the only thing keeping me wholly hooked onto this season.  Bonnie appears to be in a mental institution, probably of her own volition the way Enzo implies she’s hiding out when he comes to visit her.  The way she speaks in group therapy about losing a friend and not being able to fix it is super interesting.  Could she mean someone has died?  Because we’ve seen everyone except Matt in the future now.  More likely, she has a falling out with a friend by that time.  Maybe Caroline, Damon, or Alaric?  Whatever the case, nothing is permanent and that conflict will make more sense once we’re brought up to speed in the future.

What did you think of this week’s The Vampire Diaries?