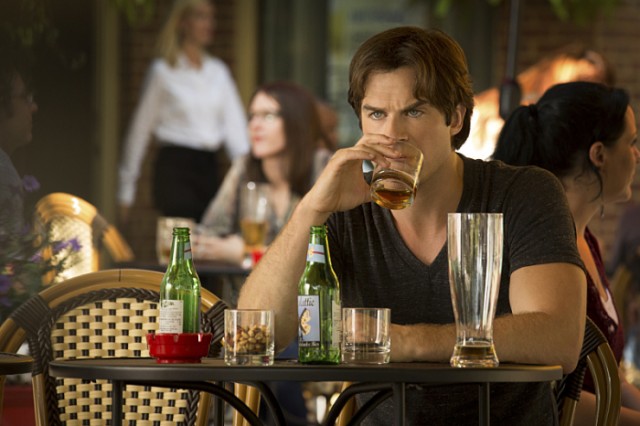 The Vampire Diaries returned for its seventh season with a surprisingly promising premiere.  For me at least, the pros outweigh the cons.  No doubt this show has gotten long in the tooth (or should I say fangs!) but certain aspects of beloved characters’ relationships feel as fresh as ever.  Of course, tensions between the Heretics and the Mystic Falls veteran vampires (and friends) are ramping up.  Heretics are the latest and greatest threat to our heroes, but there’s a whole lot more to enjoy in the episode.

Let me start off by saying that if we were to eliminate the Heretics storyline completely, I would probably love the show even more because what would be left is a great romantic comedy of sorts, starring none other than Stefan and Caroline.  Their friends Damon, Matt, Bonnie, and Alaric would make for a fun cast of supporting characters as they all grapple with getting their lives back to normal.

Sadly, the closest Damon, Bonnie, and Alaric will get to this carefree life of mindless fun is their summer of European adventures.  None of them seemed to be enjoying themselves, especially Ric.  His idea of fun is to visit psychics for kicks and proceed to kick the living crap out of these frauds when none of them can actually channel his dead wife.  Somehow he’s hellbent on finding a way to bring Jo back to life.  He’s even gone so far as to continuously bribe the mortician to keep her body for much longer than is technically allowed.  Alaric sees no reason to bury her because with so much magic around, there must be a way to resurrect her.  And who knows?  Jo was a Gemini witch after all, so maybe she’s got a hook up from her own version of the Other Side since the general supernatural Other Side imploded or whatever.

We got to see an older version of bitter Damon as he joked around with Bonnie about her being too careful not to get herself killed.  He did hesitate to save her from an oncoming truck in the middle of the street but only very briefly.  Just briefly enough to realize she’s the best friend he’s got, and more importantly, that they need each other.  They’re the last closest links the other has to their best friend and girlfriend, Elena.  I’m all about this Bonnie/Damon friendship, especially when he’s got her back and rips the heart out of one of the Heretics.  Which by the way, if it’s that easy to kill a Heretic, why don’t they stealthily separate all of them and pick them off one by one?  Time-consuming, yes, but bombing their house didn’t do any good.

For all intents and purposes, Stefan and Caroline are pretty much a couple.  They’re adorably awkward together as they talk about him “making it weird.”  She might need more time before they officially put a label on it, but we all know where this is headed.

Unless by some twisted events, maybe Caroline turns out to be the woman chasing after Stefan and Damon in the three-year time jump.  By the way, I love the flash forwards opening and closing the episode.  I’m all in for this season to see how they manage to cover three years worth of time because apparently we will be caught up to that period in the future at some point before the end of this season.  By then, Damon is staked and frankly grumpy to see Stefan waking him up before Elena was back.  That doesn’t bode well for Damon’s future if he really gives up that easily and would rather lie dormant than live any longer without her.  Then again, we don’t know the circumstances behind his decision so it’s too soon to judge that.

For now, we can only begin to speculate who this mystery woman is that’s hunting Stefan in the future.  It could be Lily, any of the Heretics, Bonnie, or Caroline.  I can’t wait to keep watching and see how this all unfolds!

The Vampire Diaries and The Originals are together on Thursdays!  While this is something I wished for when the spin-off was first announced, the back-to-back scheduling feels a little daunting.  So far, so good as nothing super exciting has happened yet but the major midseason finales will definitely require separate viewings.  Plus, we get a fun hashtag out of it (#Thirstdays) to rival #TGIT.

What did you think of The Vampire Diaries‘ season premiere?