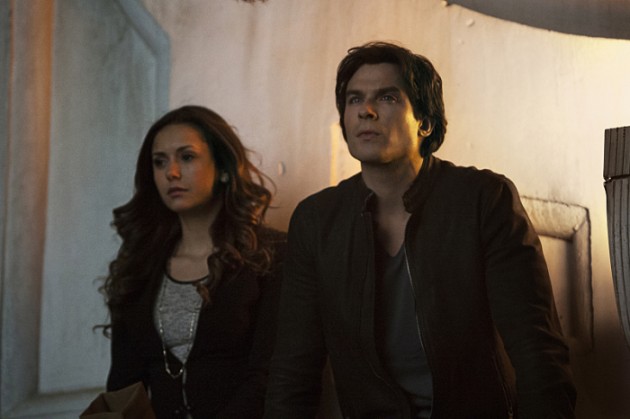 This is more like the Vampire Diaries we know and love!  Things are actually starting to happen rather than everyone running around talking.  Elena took the cure without blinking, and perhaps more importantly, we got an update on Kai, which ties into the bigger threat of Lily’s “witchpire” family escaping their prison world sooner or later.

Ripper Lily is so off-her-rocker crazy that not even Enzo could control her anymore.  It did seem unfair to ask Stefan to help her when it’s painfully obvious she doesn’t care about her sons like she used to.  Damon already accepted the fact that she’s not out to earn any Mother of the Year awards, but Stefan is determined to prove there’s maternal love in her somewhere deep down.  Good luck with that, Stefan.  Honestly, he’s better off focusing on his one family member that actually loves him: Damon.

Team Salvatore fans like myself must have loved the brothers’ scenes.  Damon wasn’t ready to tell Stefan about his plan to take the cure, which could definitely signal that he has not entirely thought this decision through.  Luckily, one perk of Elena taking her half of the cure was that she got her memories back, including one of a similar conversation from two years ago with Damon regarding the cure.  Back in Season 4, she proposed they both take the cure and be human together, but Damon wasn’t into that idea then.  Now she’s questioning if he truly means it this time around.  In Damon’s defense, I think he is serious.  Let’s consider the fact that he literally died and came back from a prison world this season.  I think he’s more than entitled to change his opinion after that experience and want to embrace a normal, human life.  Everyone else is telling Damon what they think, but no one is considering that he has already changed, for better or worse.

Matt and Tyler are still around, just barely.  They shared a strange scene at Alaric’s bachelor party.  Matt’s progressively growing more and more bitter at all these supernatural “friends” of his.  He went so far as to warn Ric to take Jo and their unborn child(ren) and get as far away from Mystic Falls as possible.  I fully support that idea in theory, but come on! It feels like we just got Ric back – from the dead, no less.  He can’t be done with this mess already and walk away that easily.  Plus, we already know Tyler is leaving by the end of the season.  He’s been pretty useless for a long time now so that at least makes sense.  The only question here is, how will he be written off?  Somehow I don’t think Tyler and Elena will be riding off into the sunset together.  Tyler actually already lives in fear of one day killing someone on the job if he becomes a police officer, which would trigger his curse again after he had just gotten a second chance at life.  He’s really in a lose-lose situation here, because the quality of his life now doesn’t seem to be a happy one.  The least we can hope for here is a dignified death, as harsh as that might sound.

A few other noteworthy developments that occurred this week involved Lily, Jo, and Kai.  Lily had the honors of telling Jo she’s carrying twins, which comes as no surprise since that’s a Gemini witch trait for firstborn generations.  Now Jo is worried about the possibility of Kai escaping his imprisonment again because of the babies’ future merging.  I’m confused about that, because would Kai really be able to even merge with a baby who hasn’t developed any of its own powers yet?  We might find out soon, because like I said, Kai and Lily’s new family are well on their way to returning home somehow.  Maybe once Lily is reunited with her chosen family she’ll start to lighten up on her actual sons.  That’s doubtful, but we’ll have to keep watching the last three episodes to see!

-”I had so much fantasy in my life, Elena. Enough for a hundred lifetimes. I’d give it all up for one lifetime with you.” -Damon

-”I suppose I’d be like you: sad and alone.” -A distraught Lily to Stefan