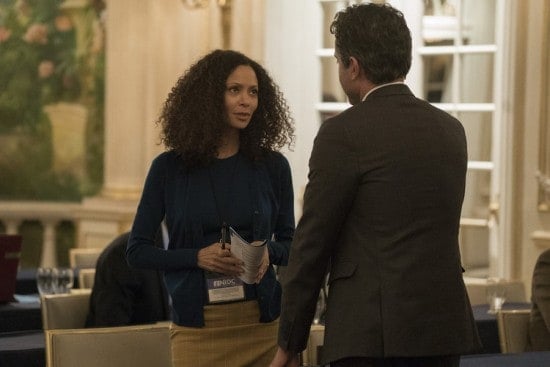 As The Slap comes closer to the end of its run, this week’s episode centers on Aisha. However, for a character-centric installment, this episode in particular was one that failed to zero in on its titular character as much as the preceding hours of the show have.

The sixth episode of The Slap begins with Aisha remembering the night that Sandi was battered by none other than Harry. The scene, as brutal as it is, narratively speaking, does not seem to add much except for one small yet very important detail: Aisha does call for Hector’s help. The episode does not center on that at all, however, I cannot, in good judgement, avoid mentioning it. So Hector knew and is still trying to assist his cousin in getting out of his legal troubles? Yuck. Why is no one suggesting anger management?

Later, a group of enablers and Aisha are sitting in Harry and Sandi’s living room, listening intently to Harry’s lawyer, the cut-throat Thanassis, and one of his advisers. The plan is basically to try to give the wife beater’s reputation a makeover in order to make people’s minds bypass the latest development, which is that a tabloid has published his mug shot and the story of his arrest. In order to look like a decent human being, Harry will have to attend to publicist-vetted charity events, donate a car, etc. Still no one suggests therapy or anger management, which is problematic to say the least. Moreover, the attorney claims that Aisha will make the perfect character witness; in response, she asks for time to ponder about it. Clearly, she wants no part in it, and it is 100% understandable. What is not is the fact that Hector fails to come up with any other people who could put in a good word for Harry in order to save his wife from having to do so. The issue might be that there is no one would could actually attest to that, yet Hector’s inaction is disgusting.

At Gary and Rosie’s house, Ritchie is showing Hugo’s dad a few pictures he has taken. The young adult is asking for advice and Gary is very good at giving it; in fact, he even tells him about the school he used to work in and highlights the fact that he might get a scholarship. At this point, both Gary and Ritchie are my favorite characters by a million landslides. Sadly, the incipient mentor-mentee interaction is interrupted by hurricane Rosie, who blatantly asks Ritchie about the pictures from Slap Day. Gary intervenes and sends Ritchie and Hugo out for ice cream, and as they leave, he faces his wife’s fury. Not backing down, he warns the enraged mother that they should not involve Ritchie in Slapgate; he then adds that she is so invested in punishing Harry that he doesn’t know who she is anymore. Go Gary! I believe we have all been waiting to hear him utter those words for a long time.

At Aisha’s clinic, Connie and her say their goodbyes and even hug. To make matters worse, Connie actually says, out loud, that she loves Aisha, which is all very awesome except for the fact that the nanny not only kissed Hector, but actually kept pursuing him.  In all honesty, though, I feel for Connie; I have trouble understanding how she could look her former boss in the eye and claim love.

When Aisha finally gets home, she finds  Hector on the phone with his parents, speaking in Greek. They are obviously inquiring about Aisha becoming a witness. When Hector hangs up, she confesses that she feels like a liar when she is in Rosie’s proximity, while she feels like a traitor when with his family. Again, Hector does not seem all that empathetic, which is enraging now that we know for a fact that he is aware of Harry “maybe bruising Sandi.” Aisha gets a call  from the clinic about a conference in Boston, which provides the perfect temporary exit strategy from Slapgate. Naturally, she opts in.

The very next day, Aisha leaves for Boston, and none other than Anouk is in charge of the kids. The writer lets everyone know that she plans for the children to forego class and instead roam NYC. As Aisha takes off, Uma Thurman’s character gives a heads up to Hector: Connie will be testifying at Harry’s trial. This prompts Hector to meet Connie at her new job, where he asks her why she is testifying for Rosie. He reminds the girl that, after all, she did not see the slap, since she was making puppy eyes at him. The former babysitter gets indignant and states that Hector is afraid of her. Homegirl has discovered the power of leverage.

After being owned by a high school-aged girl, Hector talks to his dad about Nannygate. To his surprise, the patriarch knew that there was some sort of involvement between him and the young girl and simply tells his son that he is a good man, but a man after all. He also reminds him that “the guilty man who never gets caught is never free”; funny that he does not tell that to Harry! I do like Manolis, and I understand that he just want to help “his boys”; however, he is an enabling machine.

Speaking of the trial, while Gary is at the playground with Hugo and talking with a mother whose son is playing with his, the artist notices a man snapping pictures of Hugo. He confronts the photo-happy individual, but the man runs away. The strongest theory here is that Harry’s attorney has started moving pieces.

In Boston, yet not far away enough from Slapgate, Aisha is approached by Jay,  a colleague and old acquaintance, who asks her to have dinner. She agrees and later that night, as the pair reminisce about the past, she confides in Jay that she is unsure if her husband is aware that she used to be wild. She subsequently vents out about the slap debacle and how she is torn about becoming a witness.  As they hold hands, Jay tells her to “keep the peace” and lie. Later on, the two almost make an adulterer out of Aisha, who has a change of heart as she discovers that her friend is also married, only that he hides his wedding band in a pocket. I am not sure why seeing his ring is a reminder of betrayal when she KNOWS for a fact that SHE is married.

On the way home, a text from Jay gives Aisha the push she needs to tell Hector about her past, which she does by prefacing her speech with the fact that she almost slept with her old friend. She also admits that she ditched partying and drugs and chose Hector, a synonym of decency and family life. Or that she thought.

The next day, Aisha helps an HIV positive patient who had been at the clinic (but fled) before finding Sandi waiting for her at her office. Harry’s wife has finally come clean about her husband’s abuse and thus has spared Aisha from being a character witness. Relieved, the doctor asks Sandi how she was able to forgive the abuse. The woman replies that Harry feels small, cites once again his anger and his immigrant status, which, again, I find 100% offensive and inflammatory. Just like the giant triangle was employed, a plastic heart that was on Aisha’s desk is held by Sandi, who asks if in reality the organ is that big, Aisha tells her not to play with it since it’s impossible to put back together.

Later that night, Aisha gets back home, sees her husband and children. She turns and takes off. Manolis would probably argue that she is “just a woman.”