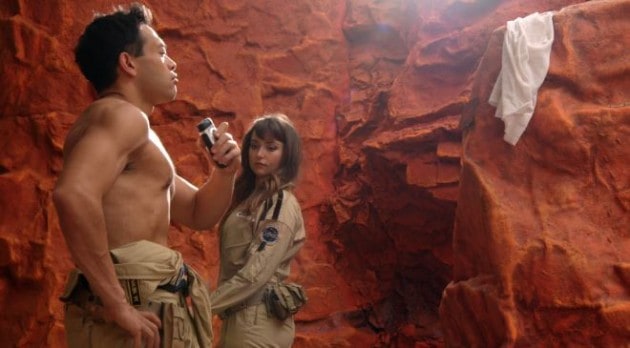 Other Space‘s effortless ability to pair off different characters in its first few episodes has ,given the show great room to grow, a trend “Trouble’s Brewing” continues by framing everything that happens around the episode as the result of a single dynamic: Stewart and Karen, easily the show’s most developed relationship. From there, “Trouble’s Brewing” sprawls out to many different places in what could be considered, in this show’s twisted little way, it’s most romantic episode. At the same time, it’s also the most clever, an episode that plays two vastly different times lines at the same time, a ridiculous little survival story that ends up a horrible consequence of the “robot uprising,” providing the real dramatic thrust of the episode.

It all begins in such an innocent place, when Karen and Stewart decide to start staying out of each other’s way, allowing them to make their own decisions without collaborative input. However, this only leads to disaster: their fractured leadership leads them both to overlook important decisions, like denying Natasha “human rights” or giving Zalien a bonus so he’ll shut up, which ends up with Stewart and the crew deserting Michael and Tina on the unexplored planet for nearly a year, due to the temporal difference. Without collaboration, there is chaos, and everything stemming from their decision to stay out of each other’s way achieves that. By the end of the episode, Tina’s eaten Michael’s leg (“months” after their relationship comes to an end), A.R.T. is trying to stage a mutiny with a spear he keeps dropping, and Kent is giving Natasha a digital flower, access granted thanks to the fingerprints of a strangler he’s wearing as gloves.

Okay, the last one is more cute than anything, but all three directly address the key components of Karen and Stewart’s relationship as co-workers and siblings; without each other, they’re nothing but idiots bumbling through an unknown space, destined to make terrible decisions because of each person’s personality imbalances. Karen’s coldness is symbiotically tied to Stewart’s overly endearing nature, just as Karen’s decisiveness often balances out Stewart’s soft-handed approach to everything; the concept is simple, but well-executed, their dynamic one of the more consistently rewarding relationships on the show.

The real gem of “Trouble’s Brewing” comes on the surface of the strange planet Michael and Tina are investigating, as their relationship goes from strangers to lovers to enemies to hunter/prey in the course of eight or nine hours, stretched out to nearly a year for them on the planet. This gives the characters the room to show some range they haven’t with other characters as they get comfortable with each other. The pair riff on Kent and Stewart as they sit and wait for the days to pass by on their “important” mission to the new planet. This leads to them sleeping together and then moving in with each other, fully establishing Michael as the stud of the Cruiser, even though he’s simultaneously the most forgettable person on the ship to the other people (except maybe Stewart, the kid he used to baby sit).

Little ironies and flourishes like Michael’s position on the ship professionally, socially, and sexually are what makes Other Space the fun, quirky comedy it is, adding to the show’s flexibility by being able to draw different shades of humor out of every character. A.R.T. provides the F.A.R.T. jokes, Zalien the airhead humor, Karen the straightest of straight women; how Other Space constantly re-arranges these already-familiar (in a good way) pieces to catalyze new story directions is so entertaining to watch, both as a comedy and as a study in script writing and character development. It makes moments like Natasha’s sheepish smile towards Kent and Michael’s conflicted jokes about Stewart more rewarding than they might seem out of context; and its those colorful accents that bring the interior of the Cruiser to life, making Other Space the beautiful little oddity it is.