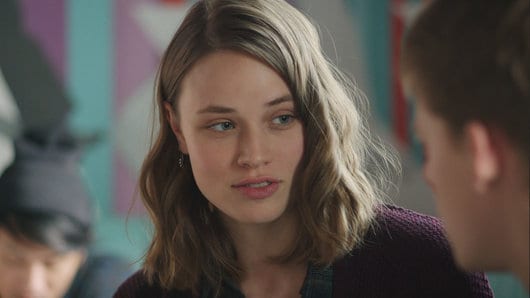 This week’s Connie-centric’s episode of The Slap continues to invite the audience to the periphery that envelopes the infamous slap, that, as now five chapters support, opened a can of worms. The key element, however, is that there were worms to begin with.

In the beginning of the show, Connie seemed to be, other than Richie and Anouk’s young squeeze, one of the characters who was most isolated to the plot. That notion was thrown over board thanks to her own episode, where it is showed that Connie has ties to Hugo’s family, and even what appears to be a healthy bond with the child.

Disjointed to the main plot, we accompany the babysitter to school, where she is still replaying her forbidden kiss with Hector. The sequence is well crafted, considering that Connie is a teenager, and the chance to have a hidden relationship with an older man she idolizes poses a captivating potential to her.

Playing the angel on her shoulder stands Ritchie, who not only is Connie’s BFF, but also someone who knows and has physical evidence of the development between Hector and the girl. Given that he was taking pictures at Hector’s birthday barbecue, which turned into Slapgate day, the teenage boy has megapixels of Harry hitting Hector, among other things. Connie asks him not to judge her and to get rid of the images.

Meanwhile, a substantially confused mediator is in the crossfire between Gary and Rosie and Harry (and Sandi, kind of). Since no one is willing to work the conflict outside court, it’s inevitably pronounced that there will be a trial. While the prosecuting attorney prompts Hugo’s parents to get her more condemning evidence and witnesses (is not that her job?), Harry’s lawyer seems to be confident about the case.

Back to Connie, she gets home only to witness a parental argument regarding telling her about something. Her presence interrupts the exchange of opinions, yet she doesn’t confront the grown ups, who have not yet discovered the hidden use of bedrooms.

What Connie going home reveals, however, is that there is unfinished business within her family. There are also family secrets revolving the young adult’s father’s death, while her relationship with her mom and stepfather reeks of tension. Hello daddy issues!

It is uncertain if Connie has always babysat for Gary and Rosie or if she started after quitting her job at the clinic; regardless, she is burning cupcakes with Ritchie and Hugo, past the boy’s bedtime. When the couple gets home, they act towards the babysitting duo as kind and understanding as they do with their offspring. Instead of scolding them over the boy’s bedtime and the cupcake debacle, they treat the teens as equals and seem to prioritize the fact that Hugo seems to be enjoying their company. In addition, this is the first time the child is behaving.

Gary confides that they need to prove that  Hugo was not swinging the bat when Harry slapped him.  Then he invites Connie and Ritchie to his upcoming art show. The evening ends with the artist and his wife being joined by the sitters, watching a movie while having pizza and wine. I cannot overlook the fact that Hugo is still awake and snuggling with Connie. Perhaps Rosie is not as smothering as she seemed to be. That detail added depth.

When Connie gets home, she is automatically in hot water with her parents, who disapprove of Gary and Rosie and consider them dangerous. Connie’s parents are also inform her that the police were looking for her to inquire about Slapgate.

As Aisha gets a call that forces her to go to the clinic, Hector has to fly solo at Gary’s show. That holds true for half a second, since he and Connie text back and forth,, and they make sure they are both in attendance.

At the opening, Connie and Hector have an exchange that is uncomfortable to watch and process. It almost looks like they are trying to recreate the gallery scene from Closer where Clive Owen and Natalie Portman meet for the first time, only that in Connie and Hector’s take, everything is off, especially the alchemy.

For reasons that are beyond comprehension, the duo go out for a smoke. Connie pathetically declares she wants Hector, and he reminds her that they can’t go any further than they have down Creepy Avenue. Bottom line: the nanny leaves and heads to the party to meet Ritchie.

At the party, Connie decides to spiral down and pops pills and drinks. Then she drunkenly tries to seduce Ritchie, who both declines her advances and sheds some light regarding her aspirations at becoming a clichÃ©.

The next morning, while Connie is regretting the drinking and pills from the night before, her stepfather comes out of the blue with a letter for her. A friend of her late father wants to meet her.

Ritchie steals his mom’s car and the teens meet Malcolm, who turns out to be Connie’s dad’s partner, for whom he left her mother when Connie was conceived.

Malcom explains that Connie’s dad ultimately left his family and rekindled his flame with him and advises the girl not blame her mother. Connie and Ritchie leave with some answers and things that used to belong to the teenaged girl’s father.

Back at home, Connie has a heart to heart moment with her mother and then heads to see Rosie, who is blankly staring at a subpoena that requests a psychological exam for Hugo.

Showing her extraordinary range, Melissa George’s character asks her nanny if she is a bad mother. She once again claims that she is just trying to protect her son. Connie comes clean about Ritchie’s photos but prefaces the announcement by disclosing that the pictures also show the kind of human behavior some subjects will be ashamed of.

In the closing scene we finally have access to the aforementioned candids, which basically bury Harry.

Even though “Connie” works better than “Manolis,” this episode of The Slap fails at fully captivating the audience. To state it bluntly, it is very hard to experience empathy toward a Lolita wanna-be. That said, Connie has enough layers to work; however, 40 minutes are not enough. This, too, felt like a filler episode.

– Gary’s indignant speech about the performance he and Rosie saw was delicious. Thomas Sadoski has always been a king at delivering speeches (I still miss The Newsroom‘s Don).

– Ritchie. He was the unsung hero of the episode. He was a good friend, and a protector, when he refused to go along with Connie’s advances and subsequently took her home, placing her away from more intoxication possibilities and the danger of being taken advantage of by anyone else.