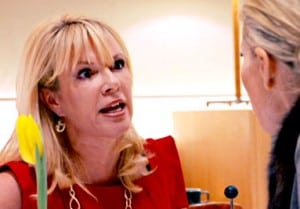 Just when you thought the battle between Aviva and Ramona couldn’t get any more ridiculous on the Real Housewives of New York City, the catfight reached a new low last night as Aviva allowed George, her 80-year old father, to walk blindly on the battlefield of blood and couture.

After hearing that Ramona dialed up her ex-husband Harry to ask about her phobias, Aviva decided to have lunch with Ramona to ask why that particular conversation went down in the first place. Ramona declared that she was only trying to see if Aviva’s problem was her constant need for Reid or a just a companion, period. In the end, Ramona decided that it’s really Reid who Aviva can’t live without. But the conversation went further south as soon as it reverted back to the antics in St. Barth’s, which Aviva made sure to inject how deplorable Sonja and Ramona’s actions were, adding a lot of yeast to her ‘hearsay cake.’

After building up enough disgust to cause “diarrhea,” Ramona removed herself from the conversation. At this point, you have to wonder if Aviva thinks walking away from her automatically constitutes a win for her in an argument. If that’s the case, then let me be the first to inform her on how that line of thinking is a prime example on why people think she’s cuckoo for Cocoa Puffs.

The words “enabler” and “enabling” was thrown around a lot last night as Aviva accused Ramona of enabling Sonja’s “downward spiral” to make her look better in comparison, while Sonja used it to describe George’s reasoning behind confronting Ramona without being witness to Aviva’s own lackluster behavior in the matter. Not claiming that Ramona was a complete saint this week (more on that later), but Aviva really seems to have this air about her that suggests she has always gotten what she wanted, probably stomping her feet and yelling loud enough to do so. Aviva’s teardown of Ramona in the restaurant was vicious, catty, and really showed how snobbish Aviva can get when you push her.

With that said, I don’t think Ramona should have called Harry Dubin to discuss anything about Aviva, because that basically flamed the loathsome fire Aviva has toward the RHONY veteran. Ramona was doing good by steering clear of Aviva, who was doing enough damage to her own reputation among the women. However, dialing up Harry, who we all know is still very much in Aviva’s life on a cordial level, was basically the same as Ramona waving a red flag in the face of an angry bull. Hell, Ramona’s dress she wore to the lunch from hell with Aviva was a perfect representation of that analogy.

But where Aviva begins to lose her cool points – and believe me they are dwindling quicker than a Gothamite’s bank account during a stock market crash – is how she didn’t confront Ramona for calling Harry, but instead, used the opportunity to scold Ramona on the St. Barth’s trip (again) and for being a “bad friend” to Sonja, who shouldn’t have been brought up in the argument at all. 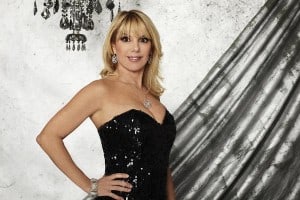 To be honest, I don’t even think Aviva was really all that mad about Ramona calling Harry than she was at Ramona as a whole when you really think about it. It’s here where despite Ramona making a clear faux pas, you can’t help but ignore it due to what looks to be Aviva’s mission to destroy Ramona Singer at all costs. Which leads us to the most despicable moment of the night.

Ramona was hosting a domestic violence charity fashion show where everyone showed up to support her, except Aviva, who was invited to the event prior to her and Ramona’s beef, but was unlikely to show up due to her fear of heights (the event took place in a skyscraper). George, however, shows up with not only a charitable contribution to Ramona’s cause, but to also serve as a messenger of Aviva’s to tell Ramona she was wrong for making fun on Aviva’s phobias. Sweet Mother of God…

Instead of dropping off the checks (which Aviva admitted in her confessional that she could have easily mailed), George continued to demand an apology from Ramona, who became exasperated during the confrontation, and made the big mistake of grabbing Ramona’s arm to get her to listen to him. Whoa, kemosabe! Ramona, furious, asked for George to leave immediately, but instead of saying, “I’m sorry. I was out of line. I will go,” George began to talk to Carole and Heather, who both (along with the Countess) felt that Aviva shouldn’t have sent him there in the first place. After George was finally escorted out the place, Carole, being peacemaker, walked him out the event, which is where George called Ramona a “trailer turd” for kicking him out. (Oh, so that’s where Aviva gets her penchant for calling people horrible names of that caliber…) Carole felt bad for him, but she has to remember that he was surrounded by a group of women, who were mostly victims of domestic abuse and his actions only embarrassed himself, not the other way around.

Again, Aviva should not have sent her dear old dad there in the first place, but rest assured that Ramona will be blamed for this lapse of judgement yet again.

Also, Sonja finally met with her ex about her divorce settlement and the meeting went horribly wrong for our bad girl, who decided to go “First Wives Club” on him by suing him and moving on with her life. She had LuAnn over to witness her first step, which was to take down her husband’s portrait (as well as her own) and putting it in storage for their daughter. Good for you, Sonja.

Next week is the season finale of the Real Housewives of New York City and it looks like it will be a doozy. Who do you think was in the right? Ramona or Aviva?