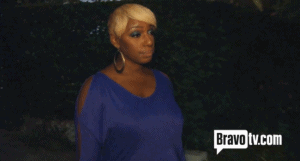 After taking a break so the Oscars could shine last week, The Real Housewives of Atlanta returned last night with the much anticipated verbal smackdown NeNe Leakes served the other women, who showed up three-hours late to her party. It was epic. It was quotable. It was damn good. Meanwhile, Kenya called herself making nice with the women, until she caught wind of her faux-ex Walter Jackson still attending events thrown by the ladies. In other words, the ban on disliking the former Miss USA whiner was lifted as quickly as it was implemented.

As stated above, only two big OMG moments occured during last night’s broadcast of The Real Housewives of Atlanta, which was more than we have gotten in the last few weeks. Plus, if you didn’t catch NeNe and Cynthia Bailey on Watch What Happens Live! last night, then you missed a huge shade slinging fest as NeNe took no prisoners on Andy Cohen’s set. More on that later.

First, let’s discuss what brought NeNe to tell her RHOA cast mates they weren’t stepping foot in her house after arriving three hours late. After the women arrived in Los Angeles (sans Pheadra Parks, who missed her flight), there was a chorus of moans and groans about how tired they were from their flight. Meanwhile, NeNe was plotting a small dinner for the girls and a few of her L.A. friends at her Hollywood home to start at 9PM. Now this is where the production behind The Real Housewives of Atlanta kind of dropped the ball, because we didn’t catch a glimpse of what happened between the time Pheadra finally arrived in L.A. and the women heading to NeNe’s L.A. home almost four to five hours later. They could have possibly took a nap or took a long damn time getting ready for the shindig, but either way, NeNe was not amused once they called her to announce their ETA. After she promptly hanging up in Cynthia’s face, the New Normal actress was on her porch, with Greg, waiting for the women as they arrived to tell them she wasn’t playing and didn’t need their company that late. She then read them the Riot Act and the Book of Shade before telling them to kick rocks, since the dinner, which she planned for them, was pretty much over. As I stated earlier, the scene was slick legendary.

While Phaedra, Cynthia, and Porsha were gobsmacked at NeNe’s wrath, Kenya and Kandi tried to make the situation light, but NeNe wasn’t having it. Greg did make a plate for them at their request, but if it was up to NeNe, they wouldn’t have even gotten a smear of Grey Poupon on a napkin. She was pissed, and she had every right to be.

The next day, Kenya made breakfast for everyone in order for them to be on time for the events of the day. Of course Phaedra and Porsha were a little leery of Kenya’s motives, but eventually chalked it up to being cordial for once. Afterwards, the ladies attended an improv class, which NeNe ended up being late to herself. Um, karma much? Later, NeNe took the women on a tour of the set for The New Normal and showed off her trailer, which Kenya even marveled over, despite comparing it to her closet of a dressing room for her first gig.

Finally, the women met up at The Crustacean restaurant to have a nice quiet dinner, 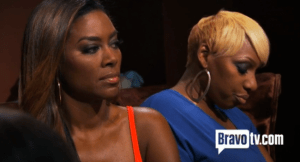 but it was anything but. First, the Donkey Booty video war was touched upon when both Phaedra and Kenya were asked about their individual projects. Why they would pick the DBV war as a topic just sounds like pure messy behavior to me, especially with Kenya and Phaedra sitting right beside each other, basically behind enemy lines. Next, Kandi asked Porsha if she felt Kordell controlled her at times, but she answered the question promptly. Then Kenya wanted to announce to everyone the old ass news of her breaking up with Walter. After being met with a silent “Duh” from the table, Kenya was asked by Cynthia if she wanted the ladies to remain in contact with him or not. Cynthia’s question was as hollow as some of Kenya’s facial expressions, because they were going to still be cool with Walter if she liked it or not. Porsha showcased that sentiment nicely by revealing how Walter came to Kordell’s birthday party and enjoyed himself pretty well. This perturbed Miss USA, who was miffed she didn’t get an invite herself. Hello?! Aren’t you and Porsha not the best of friends at the moment? So why in God’s name would she invite you to her husband’s birthday party? Dense much? Plus, why did she want to turn the convo from Walter when she was the one who initiated it? Done with Kenya. Done.

So, of course, Kenya exited the table because she was ready to go off, like always. NeNe went chasing after the former model/actress while the rest of the women discussed Walter’s knack of luring in the ladies. Then the episode ended with Kenya delcaring to NeNe that she was going to “F*cking punch Phaedra in the face.” Um… what the hell? Where did that come from? Phaedra didn’t say anything to her at the table concerning Walter so why was the violent tendacies, Kenya? SMH…

As for NeNe Leake’s (and Cynthia Bailey’s) appearance on Watch What Happens Live!, no one was safe from the jabs The New Normal star was dealing. Cynthia got a tap, but nothing along the lines of what her fellow RHOA co-stars and former co-stars were dealt in the shade game. Check out these clips:

Someone take NeNe’s dial down a notch, please?

Next week, the women continue their West Coast trip to Las Vegas and the claws really come out between Kenya & Phaedra and NeNe and Porsha. Another thrilling episode of The Real Housewives of Atlanta, I hope, but what about you? What was your take on tonight’s episode? Was NeNe right or wrong for telling her cast mates to kick rocks?