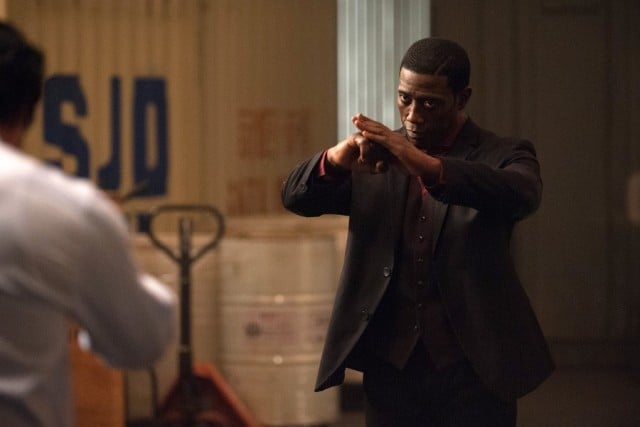 Whoa boy. Well, it took The Player five episodes until it went completely off the rails. In an hour with Cassandra dropping an American accent, and Mr. Johnson throwing down some martial arts skills (revealing a past with Chinese organized crime, in the process), you’d think it would be hard for “House Rules” to fail and miss the mark so badly. And yet, with its teenager stereotypes and casual racism, this week’s The Player gums up an otherwise pointless episode of posturing, convoluted hacker stories, and the annoying sight of Alex Kane blindly firing weapons (one-handed, no doubt) in public places.

Every issue in “House Rules” stems from the character Solomon Desai, a 14-year old Indian-American hacker, who moved to the States and couldn’t find friends in the real world – so he became buddies with random Russian mobsters looking to acquire weapons. Believing these men were his friends, he let them manipulate his life to the point he’s caught trying to hack into the Pentagon (where he discovers a virus already infesting the system), and has to crack his hard drive and run away. It’s a situation the betters of The Player are, for whatever reason, interested in.

What follows is a lot of sad moments where Solomon talks about being a nerd, and how nobody likes him, and how no girls want to pay attention to him – again, turning him to befriend some of the most dangerous criminals on the planet, a fact nobody seems to care about. All “House Rules” offers with Solomon is a series of geek cliches slapped together with a bunch of Indian immigrant/teenager stereotypes, and then it tacks on some cheesy backstory with Mr. Johnson, in the form of a teenage friend turned Chinese gangster rich boy.

In this story, Mr. Johnson murders a guy trying to rig the betting in his favor. While this certainly answers a question I’ve had all season, I have to ask: how does Mr. Johnson keep himself alive, and how do the richest people in the world want to continue playing this? Corporate global powers don’t want to make risky investments, or do anything that puts any semblance of power in someone else’s hand: how quickly Mr. Johnson dismisses a better breaking the rules contradicts these assumptions, something “House Rules” does absolutely nothing to explain or justify, shrugging its shoulders and distracting the audience with another silly tease about Alex’s now-definitely-alive wife, who can use a cell phone once, but only to tell her husband that she’s totally fine and he should stop looking for her, because that’s something bad guys think will work (if you ask me, it’s Mr. Johnson holding her, using her as a hostage to keep Mr. Kane under his employ – who knows if the writers even know at this point, though).

Whatever. Once Solomon starts talking about how everyone thinks he’s a geek and how nobody wanted to be his friend, I was emotionally checked out on the nonsense The Player was trying to peddle in this episode. Even this week’s sequence of barely-logical action scenes couldn’t keep me invested. There’s only so many no-look head shots Alex can make in between being completely inadequate at firing a gun that one man can take, and “House Rules” pushes this particular viewer up against those limits, and right past them when Mr. Johnson kills the man who just can’t help but cheat. After all, a man – and thus, a gambling organization – must have a code, no?