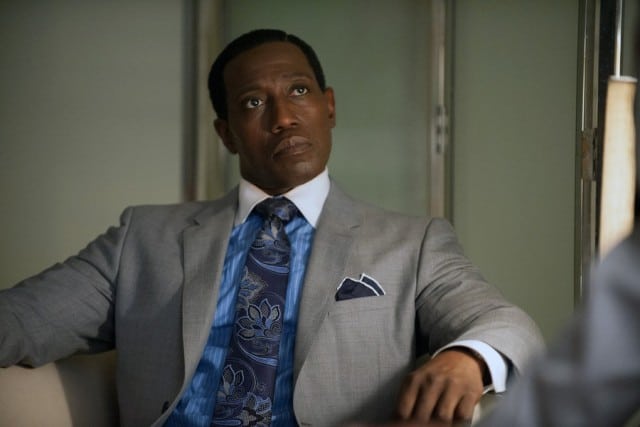 The Player is at its best when it isn’t talking. Being a show that doesn’t have to closely adhere to the typical investigative beats of regular dramas – since the series introduces an all-knowing, all-seeing computer in this episode – The Player is in the advantageous position of being able to dedicate more time to exciting, non-exposition heavy scenes – of course, we’re talking about more gun fights and more explosions, but also a little more background into the man Alex Kane is, and why he’s so compelled to fight the missions he’s being sent on today. Unfortunately, “Ante Up” is more concerned with its own plot convolutions; it doesn’t take the time to develop the characters, or the explosive moments – and despite a noble attempt to give this story specific meaning, is not really the most engaging second hour.

To call “Ante Up” ‘convoluted’ is an understatement. On the broadest of levels, it’s a story where Mr. Johnson pits Alex against a psychotic former colleague, just as a “test” to see if he’s ready for the real work (and apparently, a distraction so he can murder some dude in Pakistan Kane was looking for). And for a story that one would assume would shed some light into who Alex is, “Ante Up” is surprisingly short on details about The Game’s new Player (or The Game itself, but that’s a whole different issue), only offering up small reminders that he murdered a lot of people overseas, and is still pretty cool with doing it today (for example, he violently stabs a man in the neck with a switchblade, in the episode’s climatic moment). The Player is trying to be very serious about its protagonist, but doesn’t really seem to know how to define him outside of the most rudimentary, predictable characteristics.

That lack of character exploration – particularly in an episode featuring an antagonist from his past – places a heavy impetus on The Player to deliver an exciting Bet of the Week story, or shine some light on the process of The Game, and considering the premise of the episode was tailor made to do both at the same time, how it manages to do neither is almost impressive. Apparently, “losing” isn’t actually losing in The Game: “The House” can double down, and re-employ the techniques of Aida (the all-knowing AI) to help The Dealer assist The Player (but not too much!) in defeating Dominick, who wears a very striking American flag mask during his crimes that never really gets explained beyond “Man, soldiers come back messed up sometimes!”

There’s already too many variables being thrown into the questionable, barely explained logic of the betting process. What bets are actually definitive, and which get an hour extension when needed? How is that decided – and if it’s an objective decision on the part of the house or the dealer, how do the players ensure that their interests are being protected, and not being manipulated for some other end? Some background into who Mr. Johnson and Cassandra are (minus the fact the latter has a boyfriend who gives her sexy time, the only thing we learn about her), rather than some more goofily-named rooms, rules, and objects, would’ve gone a long way in “Ante Up,” which spends a lot of time re-complicating a process the audience has barely learned in order to serve an undercooked story.

The biggest issue is how restrained and self-serious it is. There are no sequences in this episode like Kane’s interrogation in the pilot, no chances for anyone to express any kind of personality to engage the audience with. It’s all very cut and dry, until the action set pieces of the final act – which are the kind of preposterous, thoroughly insane things The Player needs to do in all aspects of its story. Pump it up on some Scandal hormones, and keep hiring directors from Strike Back (as they do in this episode, reuniting Michael J. Bassett with Philip Winchester): this is the kind of formula The Player needs to embrace, simplifying the rules of its game (or just not explaining them, along with the many obvious hints towards big conspiracies) to make a much simpler path to the kinetic excitement that finally comes to the surface when Kane is fighting for his life on the back of an open airplane, then jumps off of it (willingly) without a parachute. That’s the kind of ridiculousness The Player needs – hopefully it will come to embrace it sooner than later, and distinguish itself from the rest of loud, utterly preposterous dramas on network television.