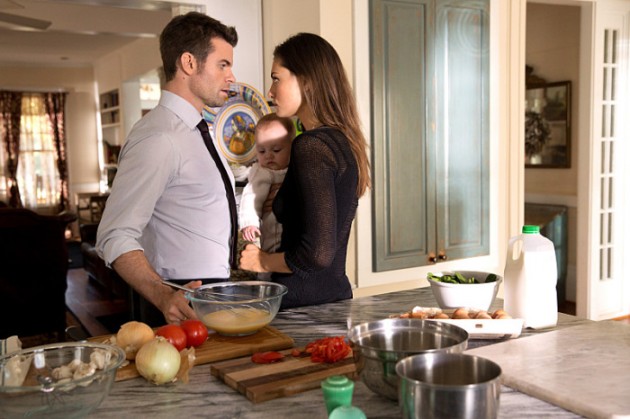 The winter premiere of The Originals did not disappoint.  As usual, plenty of action and drama went down in the vampire compound, but the witch asylum was most interesting.  Of course, the surprise plot twist at the very end was a nice touch!  It’s something we all knew had to be coming, but never under these circumstances.

What I’m talking about is our introduction to the long lost Mikaelson sister, Freya.  Ever since Esther’s past with her sister Dahlia was revealed, I’ve been waiting for her appearance.  Now that we know Freya is some sort of supernatural being herself (appearing as a Jenny Humphrey lookalike ghost), then the all-powerful Aunt Dahlia must not be far behind.  It’s still unclear why Freya’s body is being kept inside this witch asylum in the first place.  Is she a vampire, a ghost, a witch, or all of the above?  All we know is she’s looking out for her little sister Rebekah, who is now trapped in not only a new mortal witch’s body but also trapped inside this asylum.

Now let’s talk about Rebekah’s situation for a minute.  I miss Claire Holt.  It took me some time to get used to the new actors for Esther, Finn, and Kol, especially, but I really don’t want to accept that this is the Rebekah we’re stuck with forever.  No offense to the actress; she’s doing a fine job already.  It just doesn’t feel like it’s actually Rebekah since she’s just one of a dozen new faces in a new setting.

Back in New Orleans, the wolves and vampires are meeting in the compound when Finn traps the two “degenerate species” inside. They aren’t on the best of terms as it is, but add to that Finn’s witchy games of tempting all the vampires with an insatiable hunger with only their enemies to feed on, and things turned hostile fast.  In the midst of all this, Hayley decides to be honest with Jackson about her relationship with Elijah.  Jackson’s hurt that she is obviously always going to love Elijah, but he takes this in stride.  He still wants to go through with their marriage for the sake of their pack.  His real proposal was actually very sweet!  It’ll be interesting to see if and how they are able to go through this “mystical unification ceremony” both knowing full well that it’s purely business.

Another cute couple alert: Davina and Kol worked together to break the spell over the compound for just enough time to get the wolves out.  Crisis averted, or so it seemed until Klaus threw Kol right back in with the hungry vampires.  He’s no dummy and knows that Kol did something to screw up their plans for Rebekah to end up in the body they had planned for her.  At least Davina has Marcel on her side, and he’ll do the best he can to keep Kol out of harm’s way while he’s surrounded by vampires.

Cami and Elijah are on Baby Hope duty in the safe house, or as Cami refers to it “a supernatural witness protection program.”  This unlikely grouping may end up benefiting Elijah in the long run.  He’s clearly still not over his PTSD from Esther’s torture.  Cami has experience in the psychology field, so she offers to lend an ear out to Elijah if he ever feels like talking.  Who knows?  Maybe magic isn’t the answer to curing Elijah of his troubled past, and all he needs is some good old fashioned therapy.

This episode leaves us with a new Big Bad rising to power.  All season so far Finn has been Esther’s faithful servant, but now that she gave in to the temptation and completed her transition to become a vampire, he’s disgusted.  Finn has actually always held a grudge against his parents for continuing to have children after they lost Freya, and he’s going to make them and his monstrous siblings pay.  Now I just can’t wait to see how the Freya character plays into the rest of this season!