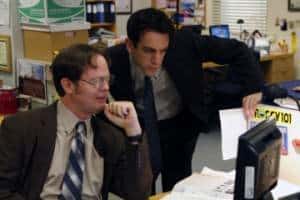 The Office returned tonight for the premiere of it’s sixth season and Michael was in his usual manner being awkward, screwing things ups, and inadvertently mucking up the lives of those around him. God I missed this show, and I didn’t even realize it until I sat down tonight to watch Gossip.

Tonight on The Office, Michael overhears some gossip about how two of the interns are dating and is noticeable upset that he was the last in the office to hear of it. After a few more instances of being the last to find out about something in the office, Michael learns from the interns that Stanley was at the same club they went to and was with his wife. Michael, thinking he’s on to something, starts spreading the news but it abruptly told that Stanley’s wife is out of town. After confirming with the interns once again that Stanley was up to no good and making out with the woman, he begins to spread the fact that Stanley is having an affair around the entire office with glee. Jim, being the always available voice of reason tells Michael to stop and reminds him that he could ruin Stanley’s life.

Naturally, Michael feels the need to get to the bottom of this rumor he’s started and asks Stanley only to learn that it is in fact true, and that he is having an affair on his wife Teri with a woman named Cynthia. After Stanley begs Michael not to tell anyone in the office (too late!), Michael hatches a plan to cover his tracks by making up fake gossip about all of the rest of the gang. However, some of the rumors hit a little too close to home, such as the rumor that Andy is gay. In some of the funniest moments on the episode we get to watch a confused Andy try and convince everyone, especially himself, that he is not gay, despite the fact that he would make out with Brad Pitt, but only if he persisted. Of course, Michael does get lucky and hit on another rumor that is true, and that is the fact that Pam is pregnant with Jim’s baby.

As things draw to a close the crew confront Michael about his shenanigans and he fesses up as to why he made up all the rumors, to protect one true piece of gossip. They all demand to know what the true rumor was (Andy screams “Michael, am I gay?”) and Jim and Pam quickly save the day, and possibly Stanley’s marriage, by fessing up about the baby.

Michael isn’t happy at all that he wasn’t told about the pregnancy. But while he’s arguing about it with Jim and Pam, Stanley’s wife Teri calls (Michael had called her to see if she was really out of town). Jim and Pam beg Michael to hang up the phone telling him that he do this and he can’t convince Teri that there’s nothing suspicious going on. Michael insists that he can, so he picks up the phone and says, “Cynthia.” But as if calling Stanley’s wife by the name of his mistress isn’t enough, he does it one more time to make sure it’s sunk in. Jim hangs up the phone. Stanley does manage to get his frustration with Michael out though, by beating the hell out of Michael’s car with a crowbar.

Best dialog of the night:

Michael: Did you pee on a stick?
Jim: I did…it was inconclusive.