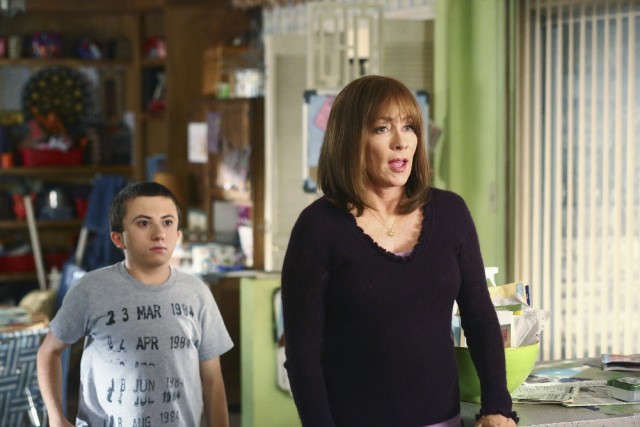 The Middle was hilarious and on point as usual with a midlife crisis surprising all the Hecks.  It’s not often Mike is at the center of an episode, as he would rather not be bothered by anyone for anything, but his latest choices definitely cannot be ignored.

You would never guess Sue had a minor freak out of homesickness just last week by the sheer joy and amazement on her face at the college club fair.  When she realizes that none of the clubs make cuts like high school, she goes wild and joins every one that appeals to her.  By the end of the episode, she’s overwhelmed with too many responsibilities that she needs to make cuts herself.  I can only hope she sticks with the acapella group though!  There’s surely plenty more ways to write in her craziness with a new group of singing friends.  They already helped her sort of fix her mistake of inadvertently breaking up Axl and Devin.  Speaking of Axl and Devin, I’m a little leery of their new arrangement.  Basically they’re going to be in an open relationship, but I can see that blowing up in their faces sooner rather than later.  One of the two will predictably get jealous of the other, and this will just cause more drama.

Back at home, Brick is making some adjustments to the chore chart to ensure that his parents start “pulling their own weight” around the house.  He didn’t get the reaction he hoped for, but instead he learned a very important lesson from the simple task of cleaning the bathroom.  First of all, let me just say he’s smarter than that to drop one of those toilet bowl cleaners in the actual toilet bowl and literally flush it 3000 times expecting it to clean itself.  Turning to YouTube helped him attempt to fix up the tiled shower, at least until the wall of tiles fell off entirely.

Frankie’s not even mad when she sees this mess in the bathroom.  If anything, it’s an overdue wake up call to her that she needs to pay attention to Brick.  She must’ve figured he would know by now that they’re the type of family that’s held together by all the “filth and grime” equivalent in the bathroom tiles.  Instead of addressing the deep-rooted causes of problems, they skate over it on the surface until it’s functional again.  I couldn’t stop laughing at this whole spiel of hers because it is pretty much my own family’s credo.

Now it’s time to talk about Mike.  He randomly decided to switch up his wardrobe for one day by wearing a Hawaiian shirt instead of a flannel.  It wouldn’t have been so bad if the only people to see him and crack jokes were Frankie and Brick, but Brick snaps a picture and video chats with Sue and Axl right away.  Mike also chooses to wear it the one time he and Frankie had plans to go out for dinner with friends, who of course keep ragging on the shirt.

Keeping the elder kids in the loop about the shirt is nothing compared to Brick’s phone call to his siblings later when their dad rides home on a motorcycle.  Nancy Donohue’s words to Frankie about a midlife crisis – or “manopause” as Doctor Oz called it – hit too close to home.  Apparently, this is just the beginning of what’s sure to be a fun new side of Mike and, more importantly, an even funnier side of the rest of the family as they react to his new interests.

I hope you all enjoyed this episode as much as I did!  If you think about it, every family is held together with its own “filth” whether you admit it or not, and that’s actually a very sweet realization.