Home
Television
The Middle
The Middle Season 6 Episode 22 Review: “While You Were Sleeping” 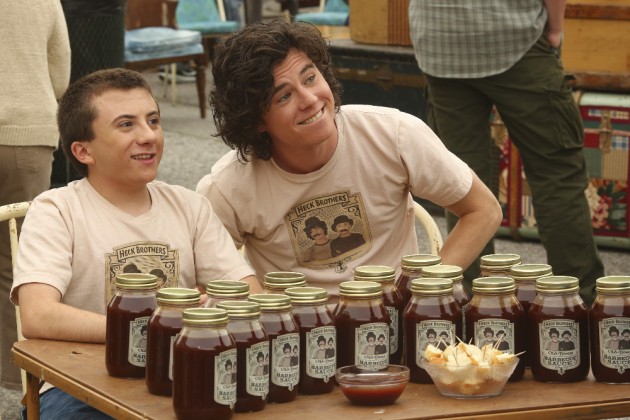 Frankie and Mike try and fail to get through one date night on The Middle this week.  Of course, they’re often interrupted by the kids, who all contributed to another solid episode.

What started out as a super cheap date night quickly became a weekend long struggle to finish one Redbox (or should I call it Bluebox) DVD rental.  Frankie and Mike remind me a lot of my own parents when they’re either too busy talking through a movie to actually pay attention, or they end up falling asleep and then missing crucial parts.  Either way, the Hecks learned their lesson to not even try to watch complicated and/or long movies.  Mike made a great point in saying they should stick with TV!  I completely agree with that!

So with their parents glued to the couch much of the weekend, Axl and Brick were free to bond as they think they’ve stumbled onto a great new invention: barbecue sauce.  Brick actually was experimenting by throwing random kitchen ingredients into a bowl to make Frankie’s cooking more appealing when his concoction ended up tasting almost exactly like barbecue sauce.  It’s a shame but not at all surprising that the kids hate their mom’s cooking that much.  As a matter of fact, I’m sort of shocked Frankie cooked at all.  Her version of “making dinner” used to be getting take out every night.  Anyway, this Heck brothers old timey barbecue sauce was a fun little storyline.

As usual, Sue stole the episode.  Her senior prom was coming up, and she’s heartbroken when receiving her prom dress in the mail.  She ordered it back when she was still with Darrin and now only planned on working at Spudsy’s since she didn’t have a date.  Sean Donahue should get some kind of award for being the sweetest honorary Heck.  He showed up on their doorstep to offer to go to Sue’s prom with her after driving hours from Notre Dame and rescheduling tests.  Even earlier this season, when Mike kept bugging Axl to come home to help him move something, Sean showed up in his place.  As sweet as I thought Sean was for offering to accompany Sue to prom, the new guy in her life really won me over even more.  Logan, the often shirtless Abercrombie employee, all but had to spell it out to Sue that he likes her.  This was even after helping her close up shop and clean up a huge mess in the food court.  They never make it to her official prom, instead opting to dance in the empty food court and take their own selfie.  I hope Logan is sticking around for a while because I would love to see how exactly Sue deals with a potentially new relationship.  Fingers crossed he just so happens to be going to East Indiana State next year so he could become a regular next season!

-”If you don’t know that I mean Bradley Cooper when I say Gary Cooper then what’s this?” -Frankie motioning between her and Mike after he can’t figure out which actor she’s talking about in a movie

-”I’m telling you we should just watch TV.  Half hour comedies. That’s the way to go!” -Mike