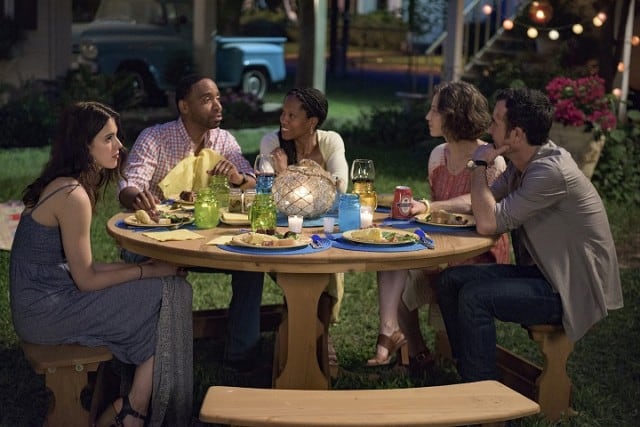 The Leftovers 2.0 started by dropping us into Jarden, Texas and all the new mysteries that go along with these people.  Unconventional, maybe, but it was a clever way to revamp the series with almost an entirely new cast for the first 45 minutes of the premiere before making the connection to Season 1 as the Garveys arrived.

The new theme of the show seems to be to “let the mystery be,” as even the new and drastically different credit sequence sings.  Perhaps it’s always been this way, considering we never got answers to many of the more far-fetched mysteries.  The beginning of this episode is a true testament to this motto then because the significance of the cave woman in ancient times is only the latest question posed.  Although it was implied the site of her life and death was indeed Jarden/Miracle, the exact link has yet to be explored.  By the end, we see the watering hole has dried up and at least three teenage girls have vanished.  Is it possible this is the first Departure to take place in Jarden or is that land special for a reason?  This is definitely going to be a fun season to watch.

We’re first introduced to Miracle, TX through the Murphy family.  I see a whole lot of similarities between John Murphy and Kevin Garvey.  Namely, their paranoia.  At least Kevin’s paranoia through much of the first season showed, in some ways, that he could change as a person, which is further proven by this big move across country.  John, on the other hand, is skeptical of everyone, including a childhood friend who claims to be able to read people’s futures through painted hand prints.  Whatever John’s grudge is, he uses his power as captain of the fire department to actually set his friend’s house on fire because he wouldn’t stop doing what he’s doing.  Then of course there’s his whole issue with a cricket in his house that’s driving him insane.  John and Kevin will either become the best of friends or the worst of enemies.  Either way, they’re neighbors now!

There’s so much going on in this town that needs to be further explored to be comprehended.  The homeless Moses-looking guy atop the tower that Michael Murphy feeds – what’s his deal?  How about that bird Erica Murphy dug up from a box in the woods?  I’m assuming it was dead when she buried it, yet now it was alive and well before flying away.  The most graphic scene of the night goes to the seemingly senseless goat slaughtering in the middle of the diner.  The dude walks in, and a waitress begs him not to, but she really doesn’t do anything to stop him as he throws down a plastic tarp to more easily drag the poor animal out on.  Not even the Murphy family blinks an eye at the scene, as if this is normal for the town.  What is going on?!

Matt Jameson and his wife Mary were shown to have moved to Jarden recently, which is probably how Nora and Kevin heard of such a place.  Next week’s episode will focus back on the Garveys and their journey to Texas.  So far I’m liking the tone of the new season.  Not too different, but still strange enough with a new set of characters to keep me hooked.

What did you think of the season premiere?