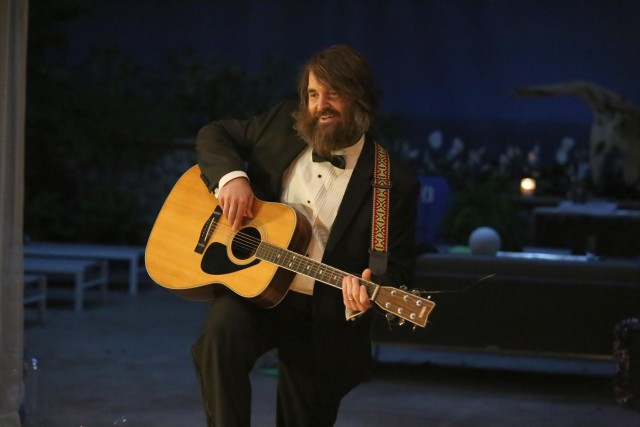 With a horribly coordinated – if not well-intentioned – Viking funeral for Phil Stacy Miller, “Valhalla” unsurprisingly deals with the emotional fallout Phil’s death has on the group. As “Valhalla” works its way through the various plot threads left untouched since “Silent Night”, however, it does manage to unearth some unexpected wrinkles about Phil’s relationship with his brother, a man he thought died in space years ago. And despite being an entertaining, amusing episode in its own right, that subtle undercurrent, “Valhalla” might be a bit of an underwhelming return for the Malibu crew on The Last Man on Earth – it’s really the third-act shift to examine Phil’s motives rather than his behavior that is the saving grace of this episode.

After “Pitch Black”, it would be natural for “Valhalla” to feel like its taking a step back a bit; Mike’s “rebirth” to Earth is a much more exciting, unpredictable story to follow than Phil processing grief, something we’ve seen numerous times before. Sure, it’s entertaining to see him fail at shooting a bow and flaming arrow and sing a horribly-thought out song eulogizing Phil – but as always, it takes a heavy dose of Carol to get this episode back on track, first with Phil, and then with how she blows up the show’s “love” triangle, dropping the dime on Gail and Todd’s naughty time to Melissa.

Carol is often the savior of The Last Man, and “Valhalla” is no exception: how she masterfully nails Phil’s emerging sadness over his real brother’s (supposed) death pulls back the curtain a bit on where The Last Man on Earth is going, a sense of direction the show often lacked in early episodes. The first half of season two was centered around isolating the shortcomings, fears, and ambitions of everyone in the Malibu group – with Mike on the search for his brother and everyone processing Phil Stacy’s death, the back half of season two is aiming to be something a little more cathartic and challenging than what preceded it.

Initially, it doesn’t pay the most intriguing dividends: everyone’s reaction to life without Phil Stacy is fairly muted, relying more on the slapstick nature of Todd trying to manage the attentions of two women and failing miserably. Comedically, it puts “Valhalla” right in Last Man‘s sweet zone: unfortunately, it doesn’t quite have the emotional depth supporting it to really find meaning. That being said, there are moments where it feels lik”Valhalla” is scratching at the surface of something bigger: when Todd asks Gail if she’s told ‘Gordon’ about their budding relationship, the darker undertones of Last Man on Earth‘s existential ideas come to light. Does it excuse Todd for his non-committal behavior around both Gail and Melissa (who is wasted through most of the episode, once again offering her character a more vibrant personality than usual)? Of course not: but in developing the emotional texture of this second batch of episodes, having Todd point out the difficult intricacies of healing everyone is still struggling to figure out in the post-apocalyptic world they live in. Doing it alone was hard enough; trying to do it while part of a community struggling to find its rhythm only doubles down on the awkwardness to connect, which is where The Last Man on Earth finds both its comedy and drama, and often to fine effect.

As the show’s first true post-Phil Stacy episode, “Valhalla” is at its best when its looking forward, rather than existing in the present, where its usual balance of comedy and introspective character moments is a little off, given that one of its main characters just died. Once “Valhalla” begins to move out of Phil Stacy’s shadow (which is no longer floating in the Atlantic, thanks to Erica and Phil’s touching scene near the end), it begins to unearth a lot of promise in teasing where the show’s heading in these final six episodes.

The Last Man on Earth says goodbye to (a) Phil Miller with an ill-prepared funeral, while the Malibu reflects on processing grief in another promising episode.