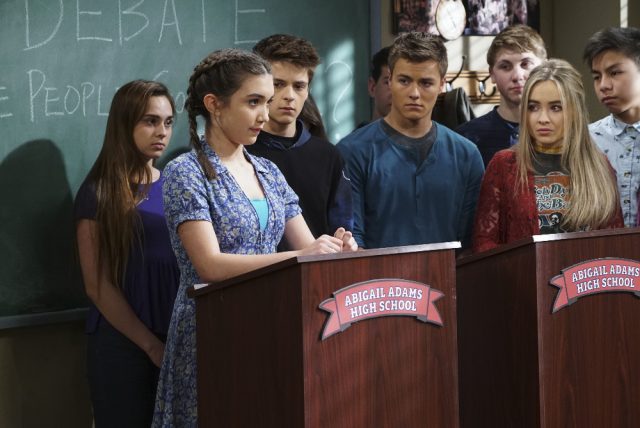 From the day we met her Riley Matthews has been a little ray of sunshine. Her innocence isn’t a bad thing considering how easily life events strip it away from everyone. However the time has finally come for Riley to grow up. Riley may be a bouncing ball of positive energy, but the outside world isn’t that way at all, and the time has come for her to realize that. This week it’s not just a case of Girl Meets World, it’s Girl Meeting the Real World. That means good, bad, and everything in between.

For someone like Riley its best to ease into serious conversations. She always likes to look on the bright side, always thinks people are good deep down and things will work out. Her never ending faith has proved to be a source of strength for her friends. It’s why Lucas was drawn to her, it’s why Farkle could lean on her during his low self-esteem days, and why Maya now has faith in her new family. The problem is that while Riley’s positive attitude has changed her own world, it can’t change the whole world, the dark sides she has been shielded from. ‘The Riley Committee’ decided long ago that Riley should be protected from knowing certain things she wasn’t ready to hear. That has to change now.

Riley is such a firm believer in positive thinking that she tunes out the negative. You would think this would be okay since it presumably cancels out others’ constant negative thinking. In fact it only makes things worse because as Cory so eloquently puts it “history teaches us that most wars start because we don’t listen to the other point of view”. Shutting out the bad doesn’t mean it doesn’t exist. Cory gives the kids an assignment to debate whether people are inherently good or evil, but only Riley will argue for evil. This debate seems ludicrous to Riley until Maya lets her do something she hasn’t before-read the news. Admit it, the bad definitely outweighs the good when you tune in.

Riley’s whole conception of life is shattered. For the sake of the assignment, and because she can’t see any good at the moment, she decides to take this discovery all the way. Riley does something bad. Now Riley’s definition of bad is not on what we would rate on a scale for a normal teenager, but she definitely does do something wrong. Zay comes into the cafe with the single cookie he has from his elderly grandma sends him now and then. After telling his friends how he understands its sentimental value because his grandmother made it for him, Riley eats it. Even worse, she kind of enjoyed shocking people, which really upsets Zay. Don’t worry, she’s still Riley. The little devil on her shoulder has the scary name of “Sassy Haltertop”.

The one person who actually understands this whole debate immediately is the one person who isn’t in it at all. Auggie reads an article about trash and pollution at the beach. His solution is to ask his mom if they can go help clean it up. They only clean up a small area, but it makes a difference, even if it’s just a little. Cory sums up this lesson better than anyone has, and given the uncertainty of Girl Meets World‘s future into another season, this might be one of his most important points. “I have spent my entire life meeting the world and I know something about it. You get this cast of characters in life. You get friends, you get family, and they help you make it through the day, but the world is a character in your life too and how it treats you has everything to do with how you treat it.”

Case in point, Riley’s change has affected her friends. They’re shaken because they know that Riley is a good person but she did a bad thing. How can they believe in good if the best person they know did something hurtful? Riley can’t get past the fact that the world tolerates things like poverty and climate change. It’s definitely a good case for an inherently evil world. Then she sees Auggie wanting to make a difference, and that’s the best case for a good world. It all comes down to choices. We have to decide to do the right thing so that our present and our future is protected, even if we can only make a small difference at a time. This is why Zay forgives Riley for eating his cookie, because he knows one bad choice doesn’t define who she is at her core.

Riley’s committed to making a small change at a time, like helping a homeless man save up for a pair of shoes. What difference will you make?