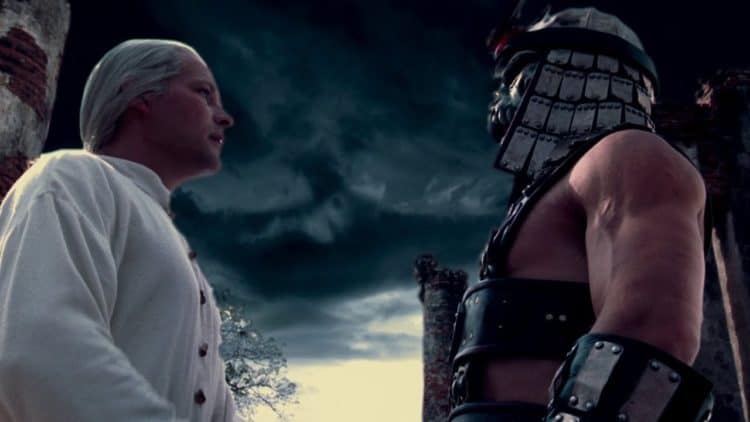 Let’s just say this and get it out of the way, Mortal Kombat: Annihilation was a terrible movie. The first movie was forgiven a lot of its indiscretions if only because it was the first live-action movie of Mortal Kombat and people weren’t certain of what to expect. Given the nature of the game it’s hard to say that any expectations would have been reasonable since even in story mode, several of them are a bit weak when it comes to their overall development. But at least the first movie had the idea to keep Liu Kang as one of the most important characters and pit him against Shao Khan this time, which was a little less impressive than his fight against Shang Tsung in the first movie. But when you factor in the idea two of the most entertaining fights in the Mortal Kombat movies didn’t even happen in this movie then it might be time to realize that the fights, the soundtrack, and the overall story struck out in a major way. It’s bad enough that Christopher Lambert didn’t come back, Johnny Cage was killed off in the opening scene, and the actress that played Sonya Blade had to be replaced. To be real, the only characters that came back from the first movie were Liu Kang and Kitana, and somehow they were even worse in the second movie than they were in the first.

It has to be noted that the way that Mortal Kombat plays around with its characters though, it’s not much of a wonder why people would be confused when they see how certain characters are presented on the screen. So Sub-Zero did die, as did Scorpion, but obviously both of them had to be brought back in some way since they’re such big fan favorites. Admittedly we did get to see Sonya’s fatality, and Cyrax kicking the hell out of Jax was oddly satisfying, but when it came to the other fights, it was just cringe after cringe after cringe. It’d be great if there was something nice to say about this movie but it’s little more than a whole lot of awful that went into the making of this. The CGI was horrible, the acting was horrid, and even the practical effects made a lot of people pine for the video game and its simple graphics. The fact that a couple of the characters were killed off in the first movie was even worse since there was less of a challenge despite the fact that there were more characters being tossed into the mix, as well as ideas that had nothing to do with the game. One might think that there were plenty of ideas to go off of when it came to creating a second movie, and they would have been right, but at the same time, it’s a wonder that no one decided to use them.

Making a movie based on a video game can’t possibly be this hard since like books and comic books they tend to come with a lot of material to work with and it doesn’t matter if the directors end up telling the same story that people have already seen in another medium, it’s still bound to be popular since people haven’t seen the story in THIS manner. Watching a video game come to life on screen and seeing that it has everything to do with the game and isn’t the director’s own fantasy coming to life is usually a well-received attempt at something great, but it’s only happened a few times in the history of video game movies, and even then it’s hard to recognize since the stigma attached to said movies is so horrible at this time that trying to find a way to break that cycle is a bit rough. Annihilation didn’t do this since it only made things harder, and that much worse. The idea is sound since Mortal Kombat is one of the best stories of good vs. evil and the middle ground that exists between them. But the sad part is that very little of this transferred over to the movie. Annihilation took off on the heels of the first movie in a way that was easy to get excited about but upon watching was bound to make people try to figure out just what they’d seen.

Hopefully, in the future, we’ll see a Mortal Kombat movie that will make certain to follow the source material in a manner that feels a little more true to the game but will also lend more focus to Scorpion and Sub-Zero, among other characters, in order to make the idea a little more sound. There isn’t much of a bar to reach after all, so whatever movie comes out next won’t have too far to go to top the first two movies.