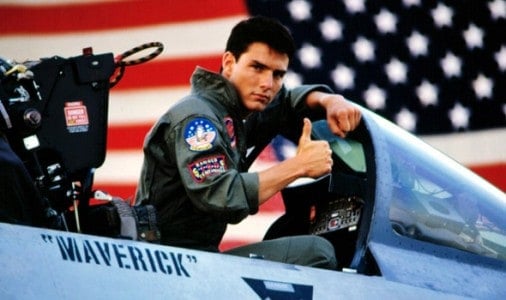 Some movies are better than any commercial when it comes to using them as recruitment tools, as Full Metal Jacket was actually seen to make a lot of guys think that joining the Marines was cool. Top Gun was the same way with Navy pilots, as many individuals who were impressed by the movie signed up almost immediately after watching it. Many would see this as a good thing as more and more people were willing to serve their country, something that they could use to the Navy’s advantage since it gave them the extra personnel and overall numbers that they really needed. Of course there was  downside to it. Not everyone would have been fit to rate entry into the vaunted Topgun program, even those that were the most zealous about. Being a Navy pilot is no joke as Hannah Shaw-Williams of Screenrant should be able to agree, since the Navy only takes the top students into such a program and even those are found wanting at times. Plus, the idea that a movie is what inspired so many people to join up does have a drawback, and it happens to be the idea that many people are disabused of once they manage to make it into the program. Those thinking that they’re going to have a good time and get right to flying jets are often in for a rude awakening as they come to find out that there’s a lot more to it than hopping in the cockpit and getting hands on training.

It’s not too surprising that the Navy was all for cooperating with those making the movie since it did put them in a good enough light to bolster their numbers and make them look pretty good, but the various quotes that came from the movie, especially “I feel the need, the need for speed!” and “You’re ego’s writing checks your body can’t cash.” aren’t exactly welcomed in the real program since they’ve been said over, and over, and over again. In fact anyone caught saying them now is fined $5 each time such words come from their mouths. Jack Stewart of Sofrep can tell you more about this. One can just imagine a whole new batch of recruits making their way into the Topgun program and deciding that they’re going to be the next Maverick or Iceman, only to find out that the more they act like either character and freely quote them, the more they’re going to lose. Plus, the whole idea of acting like a movie character is a pretty bad tactic anyway since if anyone remembers, Maverick isn’t exactly a role model outside of the cockpit since he’s a little too cocky and a bit too arrogant to really serve as much more than a cautionary tale.

There was also the infamous Tailhook Association Symposium scandal back in the early 90s when it was alleged that a large number of people were sexually assaulted by aviation officers that kind of soured the whole deal between the Navy and a possible sequel. Michael Winerip of The New York Times had more to say on this matter. The unfortunate part of this is that the act was thought to correlate with how aggressive Maverick appeared when going after his love interest in the movie, which may or may not be the case but was still enough to create a definite snag in the relations between the Navy and the entertainment industry. While assault charges such as this in civilian life are typically a big to-do and can go sideways in a hurry, the result from this fracas was that several high-level resignations came down the pipe at one point and turned it into a serious PR problem that took some time to clear up. At this point a lot of people have likely swept it as far back as memory allows,  but the mere fact that it’s able to be looked up and then brought up is enough to stop talking about it since such a sore spot is bound to be kind of hard for some folks to talk about. As of now the Navy and any other military branch doesn’t tend to see their numbers climb all that much thanks to the movies, but there are still plenty of people that begin to feel patriotic when watching certain titles and some that still think about serving their country after the credits start to roll.

Top Gun is still considered to be one of the most popular movies of all time and one of the titles that helped keep Tom Cruise where he’s at, on top of a career that has been climbing and sitting pretty for quite a while now. While the highly anticipated sequel had to get pushed back to December for obvious reasons there are plenty of people still willing to wait the next several months in order to see just what became of Maverick and why in the world he’s still a captain.