Home
Television
The Flash
The Flash Season 3 Preview Sizzle: Savitar Comes Face to Face With Everyone 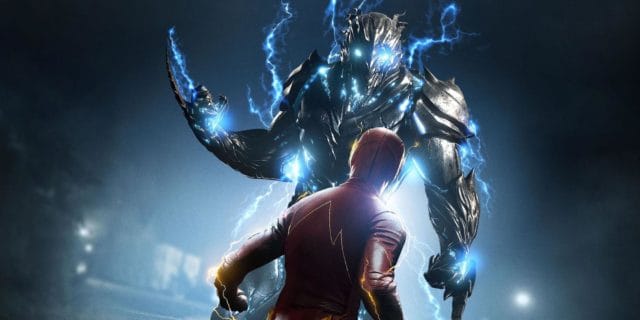 Fans of the Scarlet Speedster watched with baited breath until the end of last week’s The Flash to finally know Savitar’s identity. The self-proclaimed God of Speed has been tormenting Barry Allen all season, especially with the clock ticking down to the time he would kill Barry’s love, Iris West. Savitar was proven to be not a god, but a mortal man in a fancier suit with a heck of a lot of anger towards Barry. Savitar’s identity has been officially revealed, and whether you predicted it or not, the questions and repercussions will be lasting. The CW released a sizzle of what’s to come for the rest of Season 3, including the moment Savitar comes face-to-face with (SPOILER) his former team.

For those of you who aren’t in the loop yet on the big secret, turn away now because we’re about to get deep into some major spoilers. Last week it was revealed that Savitar is none other than Barry Allen himself! How the Fastest Superhero alive became the evil God of Speed is just one of the questions that will be answered in the last few episodes of the season. The crux of it will be that somewhere along the way, Barry suffered too much pain which corrupted him. Some will think that this is future Barry Allen, but it could also be future Barry Allen from the Flashpoint timeline, if you want to be optimistic about things.

Two of the biggest moments to come will be emotional confrontations. The first will be Savitar/Future Barry coming face to face with his former loved ones, Joe and Iris. The second is the return of none other than Captain Cold himself, Leonard Snart. Fans will remember that in this timeline, according to the narrative on sister show DC’s Legends of Tomorrow, Captain Cold was rescued from the Reverse Flash’s clutches and returned to 2014 so he could be set on the path to his destiny with the Legends. Whether it was the Legends or Flashpoint that was responsible, something clearly went askew if Snart is alive in the present.

Other moments in the sizzle include:

-The return of the Reverse Flash suit

-H.R. showing some very uncharacteristic self-loathing while Tracy Brand buckles down on research

-The return of King Shark

-Team Flash teams up with Arrow’s Lyla and A.R.G.U.S.

Watch The Flash Tuesdays on the CW to see if Barry Allen can stop the future.