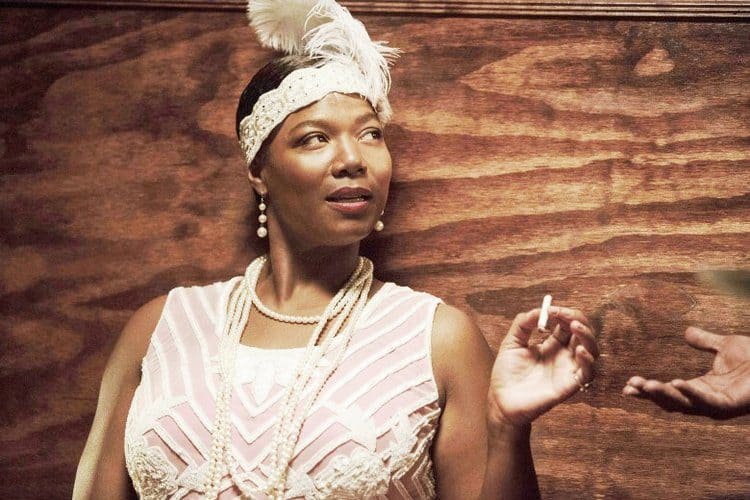 If you’ve followed Queen Latifah at all throughout her career then you’ve probably seen her as one of the pioneering women of rap in that she’s been one of the loudest voices and the most desired entertainer of many audiences. When she moved into the film and TV scene however she kept blowing up as her career took on a new flavor and her popularity started soaring upward once again. She’s typically the no-nonsense kind of woman that will tell a person just what’s on her mind and won’t mince words when it comes down to explaining herself, and it’s usually not a good idea to get her mad since she can play the stereotypical ‘mad black lady’ very well. But aside from that she’s a very talented woman that has spent the last couple of decades really turning on the charm and the talent every time she steps on screen.

Here are some of the best movies of her career so far.

Ellie is one very strange mammoth, mostly because she thinks she’s a possum. The story behind the character is that she was separated from her herd and lost during the winter. Upon coming to a sheltering tree, cold, alone, and miserable, she came upon a family of possums that befriended and then adopted her as one of their own, teaching her their ways and how to be the world’s largest possum. Her brothers are fiercely protective of her and upon meeting Manny, Diego, and Sid, are actually kind of on the belligerent side as they try to keep Ellie safe. In the end however Ellie and Manny come to realize that they’re the same and are meant to be each other.

What would you do if you heard a voice narrating the days of your life? Harold hears the voice of the writer, played by Emma Thompson, in a maddening narrative that seems to follow him around continuously, driving him mad as he tries and tries to come to grips with the idea that his life is being controlled by someone else. When he learns that he has to die for the story to progress however it’s obvious that he’ll do anything he can in order to avoid his fate, though it’s uncertain just what’s going to happen since the writer is bent upon writing him out of the story, no matter how unwilling he is.

A great deal of deceit and murder goes into this movie as it details the lives of Roxie and Velma in a way that seems to highlight the fact that they’re banking on the fact that their trials are being turned into spectacles to gain the level of fame they want. When they come to realize that their freedom upon being proclaimed innocent comes with the heavy price of their career being left in tatters however Velma decides to try and convince Roxie that they should work together, which Roxie refuses at first. When she finally says yes however, Roxie and Velma become famous once again as a duo.

Maybelle “Motormouth” Stubbs is one of the best characters in the original movie and the remake since she was one of the most outspoken individuals when it came to segregation and loved everyone regardless of their skin color, preferring to just get along and enjoy the company of others no matter who they were. She was also a DJ and among the main characters in the story, making her personality come through in a big way as she guided several younger members of the cast to a mindset that was geared more towards acceptance than segregation. In truth she was one of the more enjoyable characters in the movie.

Life isn’t fair, especially when your brother is shot by the cops after being mistaken for a criminal, or your son is taken from you when you can’t afford to take care of him, or you’re fired because the cops think you had something to do with a recent robbery. Four women decide to take their fate into their own hands when they rob a bank, making them wanted by the cops and the FBI as the heat quickly begins to close in on them. Unfortunately they’re not as adept at robbing banks as they thought, and the cops are able to predict when they’ll hit again, killing one of them and forcing the others to split up. Only one of them gets away as one is killed while running away and the other is taken in a shootout with the cops.

When she graduated to acting Queen Latifah took on a whole new attitude that was nothing less than impressive since it allowed her to really express herself in different ways than she’d previously done.