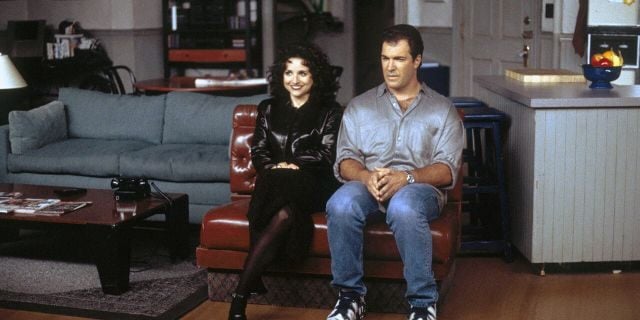 Patrick Warburton is likely known by many upon many people as the voice of Joe Swanson from Family Guy but he’s also been quite prominent when it comes to movies as well since he’s been seen and heard in a good number of them. With his voice and his gruff manner being his most distinctive features he’s the kind of guy that’s very easily stereotyped since he is big and kind of intimidating. But with that in mind he’s actually been pretty funny over the years since he’s managed to take his size and his look and make it into something that can be endearing or something that people can’t help but despise in a character given that he’s become something of a common sight when it comes to a lot of movies and TV shows. He’s had a few hiccups here and there when he played parts that didn’t seem quite up to snuff, but overall he’s been fun to watch.

This is more of a bit part for him in this movie as he serves as Stone, the bodyguard to one of the stars that’s cast in the movie within the movie, Stab. But he’s such a jerk that it makes people either hate him or actually not too sorry to see him end up dead since he’s constantly at odds with Dewey, who’s an actual police officer, former officer, or whatever his capacity is at that point. Stone is the kind of guy that thinks he’s an expert because he’s done a few things and seen a bunch in his life, but in the end he goes down like the rest of them since his arrogance is a big factor in what gets him killed.

In a lot of movies he’s not the main character but he does show up for a good amount of the movie. In this one he plays a rival coach that has a serious issue with Martin Lawrence’s character that doesn’t really get resolved but tends to be kind of silly since Martin is the top college coach that’s been busted down to middle school for his ill behavior, whereas Patrick’s character is the coach that’s been a part of the middle school scene for a while and is cocky because his team has always been dominant. Well, it’s easy to admit that a person might have a reason to be cocky when no one has come along to challenge them in a while.

This movie is like a whirlwind of characters since there are so many big names and mid-level names in the cast that it’s hard to even remember that Patrick was there. But once you turn the movie on you realize that he had a pretty decent part and was around for a good chunk of the movie as Officer Kramitz, who’s a little dim-witted but is still a good person and someone that’s better to have as an ally than an enemy it would seem. In a big way this movie is one of those that unfortunately got looked over for various reasons but is still worth the watch since it’s got the kind of comedy a lot of us are used to from back in the day.

There are only a few things in the world more emasculating than being beaten up by another person in front of your kid, but that still stings since it shows them that you can’t defend yourself because you’re not strong enough, tough enough, and possibly don’t have enough self-confidence. It might be a man thing but Joe was the kind of guy willing to bend over backwards for a lot of people and when his dignity was taken that was the last straw. By the end of the movie however he did manage to find his confidence and realize that the people were there for him when he finally became the spectacle weren’t the ones that were there just for him. And one of the best part is that his aggressor, Mark, had enough self-respect to apologize for what he’d done, making things right finally.

This is one of Disney’s lesser known movies but it’s also one of the best since it had a good message, great actors, and a likable story that didn’t drone on and on. And besides that, Krunk was without a doubt one of the favorite characters of many viewers since Patrick’s voice is kind of hypnotic in a way and his delivery is almost always perfect. Playing the part of the dim-witted servant/bodyguard is about what people might expect, but it also came with the fact that he was one of the most memorable characters in the story.

He’s just great, there’s not much more to say.